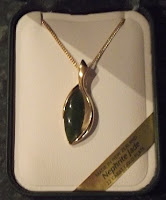 Nana’s birthday party was changed from yesterday to today but as the Rosebank Rooftop Market is only open on Sundays we decided to do our Gautrain experience this morning before the party. The girls were excited about giving her their presents (as she would be getting lots of other presents today too) and she could at least wear the gift from Brendon and I today. She loved the jade when they came to NZ but gave the ring away that she had bought. So it was nice to give her some jade for herself. 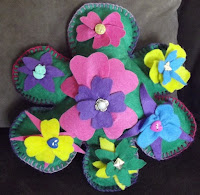 Here is a photo of the pillow the girls made for Nana. 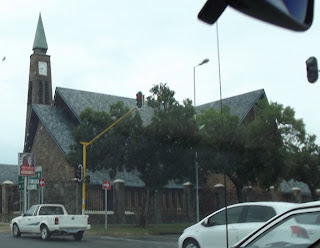 On the way to the station we drove past the church that Brendon and I got married in. It was nice to be able to show the girls. 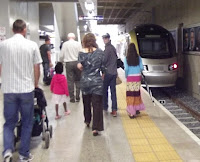 We had planned to meet Graham and Aleks at the station at around 8:45 and it worked out well as we managed to get our tickets sorted and then head down to the train just minutes before it left. Such beautiful trains – and the stations mind you. All so new still. 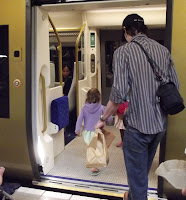 So exciting to be going on a fast train. 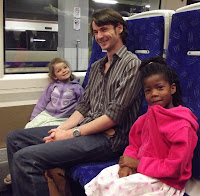 Graham with Hannah and Ruth. They took turns at the window seat. 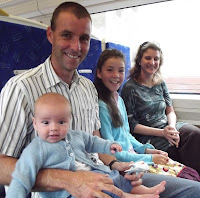 Aleks, Rachel, Brendon and Hezekiah opposite them. Rachel also moved around a bit on the first few parts of the journey while there were a lot of open seats.

I was there too. :-) It was nice having Graham to take some photos for us. Eventually I just handed him the camera to keep for the journey. 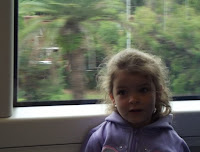 Hannah was so expressive in her absolute excitement. 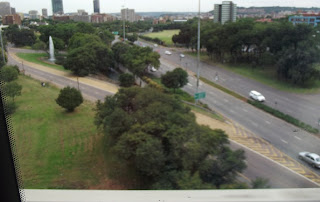 We left the Hatfield station – headed into Pretoria station and then went out past the fountain circle which we drove past on Friday on the way to the zoo. We had spotted this section of over head train track and so it was nice to be able to be on the other side – looking down (unfortunately the photo was not great – but it’s a great memory). 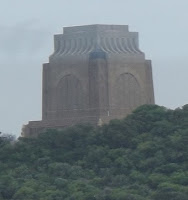 We had a lovely view of the Voortrekker monument. 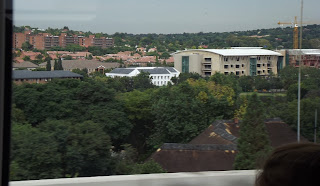 Driving through Centurion where Brendon and I stayed when we were first married. After visiting Soweto I am becoming more and more aware of all the wonderful trees most areas have in South Africa. 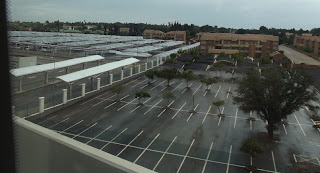 The Centurion Station parking lot. And indication of how busy the train can get during the week. It’s great that it is so well used.
It was so cute hearing Hannah singing “We’re going faster than you” to all the cars on the highway before Midrand.

It was really dark in the tunnels and so Hannah said she was going to have a nap.

She enjoyed getting cuddles from Aleks and pretending she was asleep. 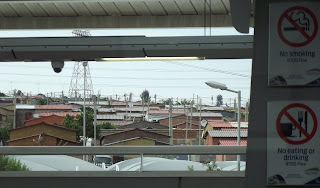 It was interesting looking at the different housing that we past on the trip. And although there is nothing specific to say about this photo it was great that Graham captured the signs on the train. No smoking or eating or drinking or you stand to be fined R700. They are making as much effort as possible to keep these trains clean.

Hannah looking out at the Midrand station and asking about the stones on the ground. I love how like experiences like this stimulate so many different discussions. 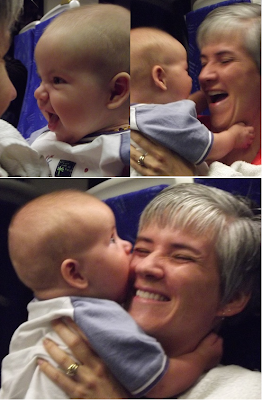 Hezekiah having some fun with me. He loves giving me big wet kisses. 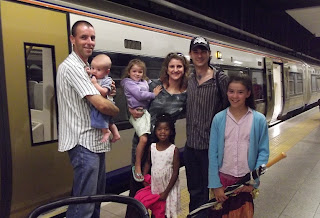 At the Rosebank Station. 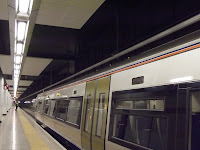 Apparently Sandton station is about 5 floors underground and this one is 3. It’s all such a new experience for me never having been to London or Europe with their underground trains. And I will tell you one thing – they travel so much faster when they are underground. We could feel the speed difference. 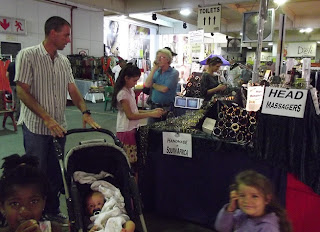 The rooftop market is HUGE – and thankfully not totally on the roof but under cover. There are so many stalls and so much to look at. We did not have too much time but enough to buy earrings for Ruth (which she has been asking for for weeks), a stress toy, some beaded animals and a fridge magnet.

We planned to get something for morning tea at the market and so it worked well to get some vet koek for the girls to try. 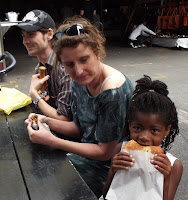 The mince was a bit spicy for the girls and so we got a plain one as well which they all enjoyed.
The adults all enjoyed sharing the mince one though – especially Aleks. 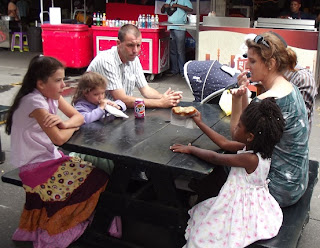 It was great to get the extra bit of time with them. After our snack we left them to explore the market some more and we headed back to the station.

I took this photo quickly as we headed back. This is really only a fraction of what is there. It’s a really popular place and I can see why.

I would guess that a very high percentage of all the things made at this market are made by poorer people of South Africa and sold here to raise money for them.

A nice shot of Ruth on our way back. 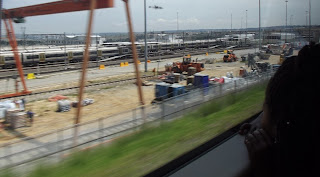 I managed to get a shot of the train depot on our way back. It would be interesting to know how many trains they have. It sure was busy on our trip back just before lunch time.

We did manage to see the Union Buildings from the train. They were a bit far but at least the girls can relate it to the beautiful pictures you see of them in books (not to mention the photos in my wedding album). 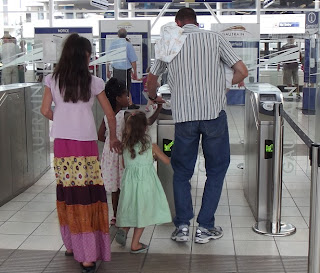 It was even fun for the girls to swipe their cards at the entrance and exit.

We were grateful to Craig and Lisa for lending our cards so that we could save the R10 each in not having to buy them – only having to put money on each card for today’s trip. It was a lovely experience and I am so glad we got to fit it into our holiday.
Posted by Buckland at 9:00 PM