From Mabula to Polokwane

As I was getting ready for my walk this morning I noticed a lot of activity in the trees across the road from us. I went out and noticed a troop of baboons was going through the camp. 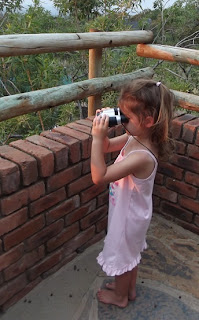 Hannah was already awake so she came out with the binoculars to have an even closer look.
These were the trees that were moving so much that I first noticed the baboons. Most of them had already left the tree by the time I got my camera out – but you still see a number of them close to the ground at the beginning of the clip and get a bit of their noise at the end of the clip. 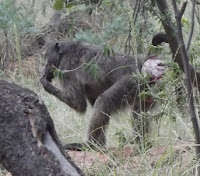 I went inside to tell the others and they pointed out a big male that was close to our bedroom window. If I had known he was there I probably would not have been out on the balcony. 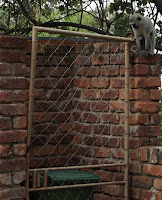 When we got down to the bush house they were busy cleaning up all the rubbish that the baboons had thrown out of the big bin. There were a few monkeys around seeing if they could get to it too. Thankfully the cage is strong enough to keep the monkeys out. Again it was a lovely experience for the children – so typical of baboons and monkeys and lovely that they got to see it first hand. 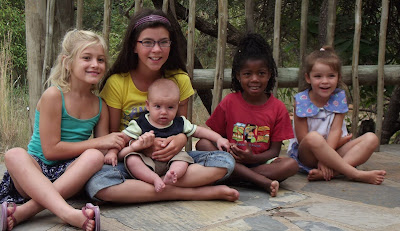 Time for photos before we all head off. A nice one of the younger children. 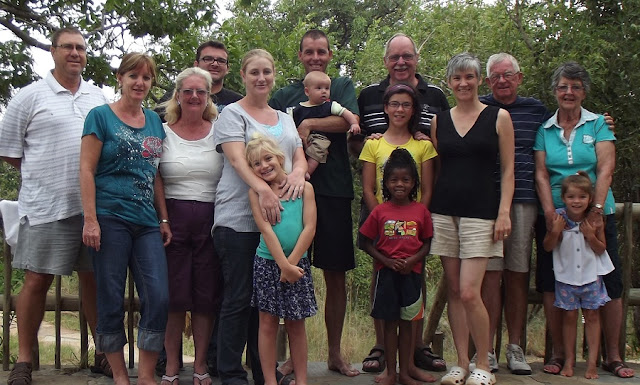 And then a big family photo of all who were there on the Friday. 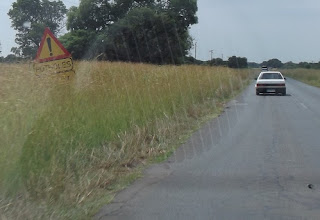 The rest of the family headed back home and we headed in the opposite direction – up to Polokwane. We had to smile at the overgrown sign – Potholes for the next 5km (sorry about the reflextion from taking the photo through the windscreen). No plans to do anything about it – just letting you know. I mentioned to Brendon how stressful it felt driving along this road with the big trucks that would come in the opposite direction and at first could not understand why it felt so scary. I then realized it was due to the potholes and the fact that the side of the road was also in such a bad condition (with big potholes on the side at times). 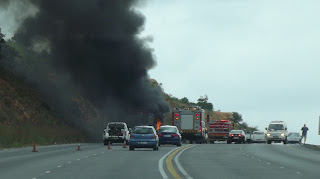 Once we got back to Bela Bela (Warmbaths) we got onto the highway and had good roads again. You obviously pay for them though and the girls got very used to having to stop and pay at the Toll gates. On the way we passed a truck that had burnt out and it was quite scary going past it as the heat was incredible.

We stopped at a 1-stop for lunch and the girls enjoyed stretching their legs. 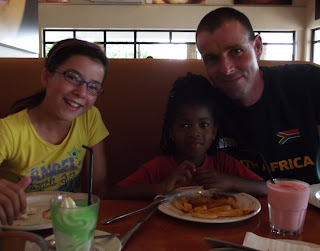 Lunch at Maxi and creamsoda float was a favourite. (And yes - for those NZ readers who noticed - cream soda is GREEN in SA). Athough there was so much ice cream it sure was not floating. Delicious all the same though. 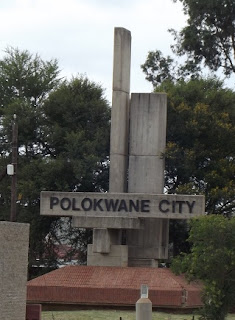 It was interesting coming back to Polokwane as this was the place that Rachel spent so many of her first years – compared to me having memories from growing up in Pretoria. There was a lovely big circle at the entrance of town which I did not get a photo of unfortunately but was obviously done for the soccer world cup. Really pretty though – I wish I had gotten a shot of it.

We headed to Debbie’s work to get the house keys and ended up fetching her from work. I could not believe the amount of traffic though. Brendon assures me that it was always this busy in town during the week.
It was wonderful being able to stay with Liz and Debbie for the weekend. The girls found some hola hoops and I was pleased to find that with the right size I was even able to still do it (I just can’t get it right on a child size one). 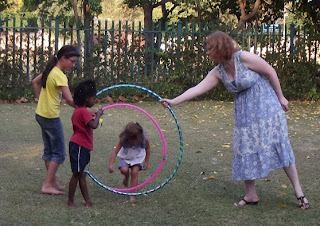 As soon as Liz got home she was outside playing with the girls. Liz had made Babotie for dinner which is a favourite with the girls and we had a wonderful time catching up.
Posted by Buckland at 9:00 PM