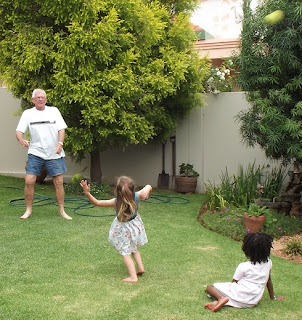 Grandpa played ball with Hannah and Ruth this morning and he was so surprised to see how well Hannah can throw. We had a nice relaxed morning and just after 10 headed over to Joan's place for a braai. Yesterday my Dad did the meet on a gas bbq - so today was their first real SA braai (and the meat was lovely - thank you Dave). 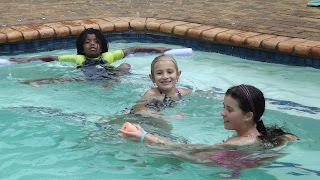 Not long after we arrived the girls were in the pool despite the colder day and cloud about.

Thankfully Dave likes taking photos too - so he got all the flack for asking for different poses and I got to take photos at the same time. I got this lovely one with Brendon, his parents and siblings. Dave took quite a few of Hezekiah and got some nice ones of Brendon and I. Hopefully I will get some copies to share with you at some point. 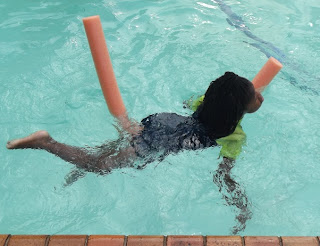 These pool noodles were a real hit and Ruth spent ages with one. At first she had it under her arms but when she tried to swim she naturally uses her arms and then it slips out. So she came up with this idea - to help her float but still allow her to use her arms and legs. The pool is much deeper than my parents and so she got a lot of swimming practice today. She swam close to the side (so she could hold on when taking a breath) and got so much practice. Trevor said he is sure she will be swimming by the end of this holiday.
Ruth and Aiden played so nicely together and I was disappointed to not get a photo of them. 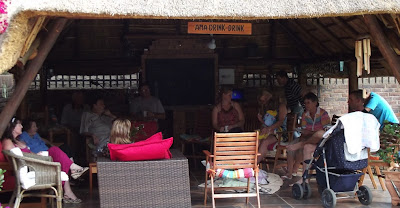 We were thankful for Dave and Joan's lapa today as it rained on and off. There was a lot of lightening around too - so the girls were in and out of the pool a few times.
As Michael was not around today we could not get a new Buckland family photo. Michelle was missing yesterday too - so I am really hoping I can still get nice full family photos while we are here.

We left a little earlier today than we did my parents yesterday and made sure the girls stayed awake. When we got home Nana saw that one of her birds had died. It had been sick for a long time - so it was a relief in some ways. Rachel had hoped she would be able to wipe one of the 3 birds but she did not expect that she would only get to do that because of a death. Rachel - with an appropriately sad face (I think she is really tired too though). 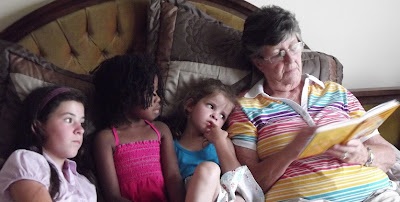 The girls enjoyed some reading from Nana before bed tonight.
Posted by Buckland at 9:00 PM