Saturday was voting day. Such a contrast to the long lines of waiting in SA. This was all the traffic we had in front of us (and they were done by the time we got there). ;-)

I thought I would take a photo of Hezekiah's nappies for those who have never seen cloth ones like this before. The velcro make them really easy to get on and off as well as getting them to fit nicely. They also have poppers on the front so that you can change the size. On the left is popped to the smallest - how we used them in his first few weeks. I tried today to put them at the biggest - but they are still a bit too big. So we use them on the middle size now and they should last till he is out of nappies. 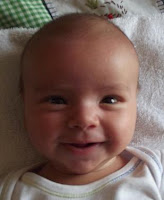 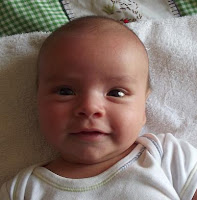 I tried to get a photo of his beautiful smile too. Left - a nicely focused shot but just as the smile as is starting. Right - such a lovely smile but unfortunately out of focus. Such a cutie though. The girls are really enjoying him more and more all the time. I keep trying to get a video of his lovely smile and precious noises but he is quite shy of the camera still. 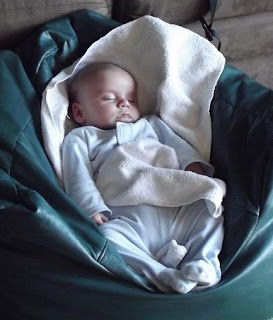 For the last few days Hezekiah has been waking up in the morning because he needs to wee. It was the same again on Sunday and after being awake for a little while he fell asleep on the bean bag and woke again when it was time for milk.
He had also not done any poos since Friday and as expected - on our first trip to the church in town - he filled his nappy DURING the service. This in itself showed me that there was a huge change in his gut as up till Thursday he still had the very typical new born pattern of pooing every time he fed.

On Monday when he pooed in the potty I was thrilled to see - for the first time - normal poo and not the foamy gas filled stools he has been having for so many weeks now. His gut is obviously maturing and changing and it's great that the improvement is so visible (with him using the potty). 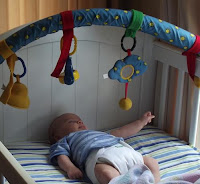 He still has a lot of gas but at least I know change has happened and the end of this struggle is now much closer. And perhaps having dirty nappies to clean is also close to being finished. We already get so many poos on the potty.
I had to smile and take a photo when I saw this. He had wiggled his way right up to the top of the cot.
Posted by Buckland at 9:00 PM