We had a long day in town today as we took Hezekiah in for his circumcision. I know this is a very debatable topic and something that Brendon and I never thought would even be an issue (for us our son / sons would just obviously be like their Dad). I know things have also changed a lot in SA over the last few years, but in NZ it is almost unheard of now days unless for medical reasons later on. So it was quite a task to even find a doctor here. Eventually I called a Jewish church in town to find out what they did. I had found a clinic in Auckland that performed circumcisions and they say they have people (mostly Jews and Muslims) coming from all over NZ. So I was very thankful that we only had to drive the hour and a half to the other side of town.

Friends thankfully allowed us to use their home as the base for the day as the procedure was done at 8:45am but the doctor wanted to just check him at 4:30 in the afternoon before we headed back home. 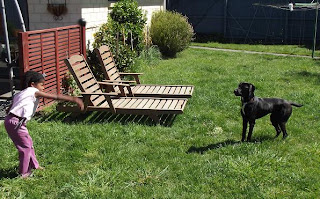 We got some shopping done and then spent the day relaxing at their home. Ruth really enjoyed playing with their dog. :-)
I was thankful to have Brendon with me as I was rather nervous about the day (not only the procedure but the long day in town - we left at 6:35am and were only back home after 8pm). A friend in SA had mentioned something about her son's circumcision almost 5 years ago and so I had written to her about it and it was so nice being able to talk to someone who had been through it and could encourage me. As she said - it was no big deal and as the doctor had said - within 4 days the Plastibell was off and it was all done.
Posted by Buckland at 9:00 PM