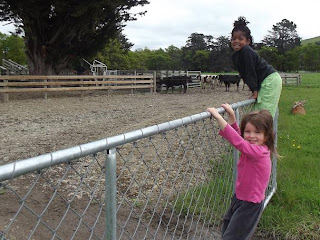 The girls were excited about being allowed to go and watch the Frosts working with the cattle this morning. Normally Rachel is with but Brendon was sure they would behave themselves.

After a while I put Hezekiah in this pouch and went down to get a photo. I ended up having a lovely chat with Lynne and by the time I got back Hezekiah had had a nice long sleep. 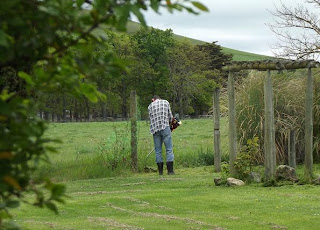 Brendon finally got his weed eater working consistently - so he enjoyed getting a lot done in the garden with it. 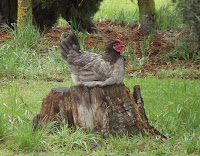 He spotted one of the chooks enjoying this "perch" and it makes a pretty photo. She looks a bit like a statue on there. :-) 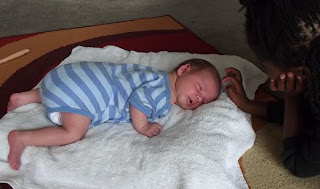 Ruth having a chat with Hezekiah - asking him to roll over onto his back again. He was falling asleep though. He had a good day though. He even took the 2nd side a couple of times.
PS: Perhaps he was just making up for the milk he spat up the day before though as it was only the one day.
Posted by Buckland at 9:00 PM