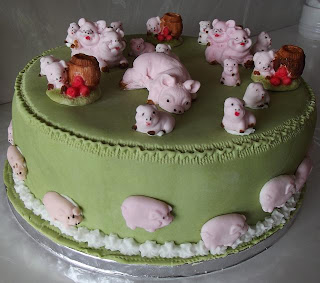 Music was cancelled this morning but that allowed us to get our errands done in the morning which worked out really well. We collected the Pig Cake for Rachel's Guide Jamboree Fundraising raffle that will be drawn tomorrow at the flower show. And it's just lovely. We also collected all the tickets that had been sold and we raised $180 which we are so very thankful for.
I also asked Julia if the girls could come and get some flowers from her lovely garden to make some flower saucers for the show. 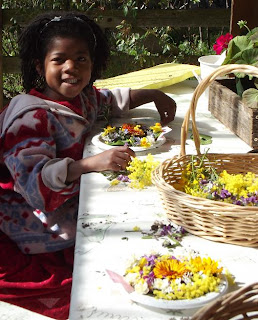 The organiser had dropped the saucers off for the girls and although it was not a very high priority this week with us being sick it was nice to at least try make a plan for the girls. 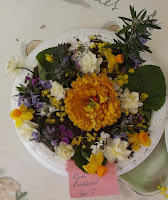 Julia was more than happy for them to come over and they had a great time.
Hannah got hers done quite quickly and then asked Julia if she could have some nuts. 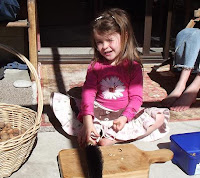 Every time she visits Julia she will ask if she can crack some nuts. She spent far more time with the nuts than she did with the flowers. Food again little Hannah! :-) 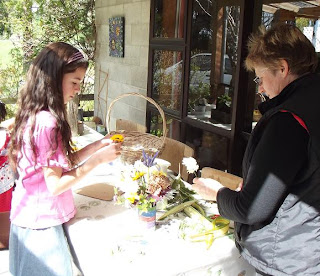 Julia did not want Rachel to be left out and so suggested she try and get something made for her age group. 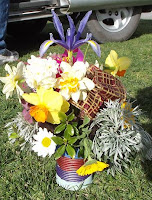 She suggested she do a flower arrangement for the theme "colours and loops" and this is what they came up with. Rachel had so much fun. 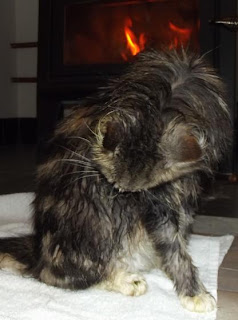 Tiger came in this morning covered in dry green muck. He must have some how gotten into a cow pat or something as he just stank so badly. I had tried a couple of times in the day to wipe him down with a damp sponge (which he allowed me to do) but although I was getting a lot of muck off it was just not getting through it all. So Brendon and I put him in the bath, sponged him wet and washed him (like you would a dog) and then sponged him off to get the soap out. I was amazed at how well this cat sat. At one point we were busy on his chest and so he put his paw up on my arm. I realized then that he had not put his claws out once. I think he hated the smell just as much as we did and knew he needed the help. I never imagined you would be able to wash a cat like that. He then sat by the fire and dried off.
Posted by Buckland at 9:00 PM