On Monday afternoon Brendon arrived home feeling terrible. He had picked up a tummy bug from someone at work in the morning and until 11:30 that night had the most terrible time. I have never seen someone so violently ill. And the dear man was trying to keep me away from it as much as possible too as he did not want me to get sick. Rachel was a great help until she went to bed and I was just extra careful with cleaning everything. We were both so relieved when finally his stomach settled and he could get some sleep. We eventually had him propped up in bed so that he could sleep in a sitting position rather than lying down again and that seemed to be a great help. He spent Tuesday in bed, sipping water and nibbling on apple and plain biscuits. Even though the vomiting and diarrhea had lasted only 8 hours Brendon said it felt like he had been sick for 3 days. He was exhausted.
On Tuesday morning Maureen came for my 37 week visit. She writes in my notes "Your babe is an enigma and took quite a while for me to feel confident that babe is head down." At one point she was convinced he was transverse again but then he shifted and then she wondered if his head was up. Maureen even mentioned perhaps going for a scan as she could just not make out what he was doing. And that's saying something as Maureen really does not promote scans at ALL. 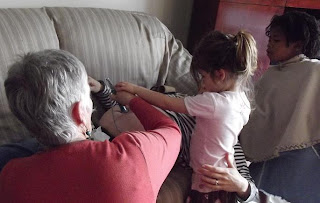 But eventually he moved in a way that she could feel his head and she relaxed. I was pretty sure he was head down but it was nice for her to feel relaxed about that too.
Normally she finds his position and listens to his heart with the Pinnards (like the inside of a toilet roll) or feta scope (similar to a stethoscope) - finding the best spot to listen. Then she may get her sonic aid out and listen in just that spot. Well today she had the sonic aid all over my tummy - trying to work out where he was. 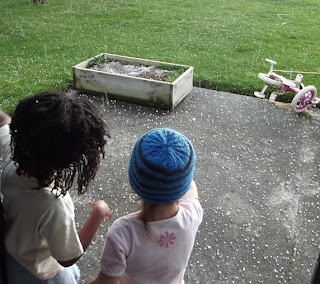 On Tuesday afternoon a storm swept across the country and we got lots of hail. It was so much in Wellington that it looked like it had snowed. 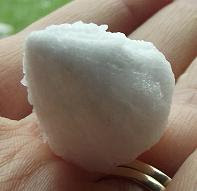 I was amazed at the shape

and size of some of them. I think I was just as excited about the hail as the girls were. 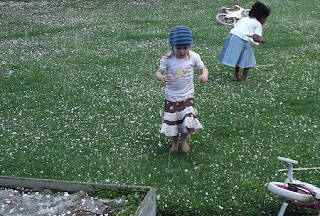 The younger two enjoyed going out with a bowl to collect some to eat.
I then took Rachel and Ruth to Ballet and Hannah stayed home watching TV. Brendon changed movies for her when the first one was done and that was all he really needed to do for her.
He was by this time quite sick and tired of being in the bedroom though - so came out and managed to have some soup for dinner. Unfortunately even though we tried so hard - on Tuesday evening I must have picked up the bug. On Wednesday morning around 4am I started vomiting. I had been sleeping in the spare room to try and isolate the bugs in our room but had not been feeling great and not been sleeping well. Thankfully I did not get diarrhea and it only lasted till around 8:30. I was exhausted though and then sat with heavy contractions to deal with for the rest of the day. The thought of going into labour at that point - with absolutely NO energy - was quite daunting. So I was very thankful that on Wednesday night the contractions eased off. Every day this baby stays inside now will give me time to build up my strength again. What a week it has been. That sure was a nasty bug and I hope we have now seen the end of it.
Posted by Buckland at 9:00 PM

Great to catch up on your blog again Belinda - well done on the quilt, and you're still looking great! Can't believe it's really any day now...looking forward to hearing the exciting news of the arrival!!