Brendon was home before one which was great. They just did the basics today (getting the pigs fed) but Brendon was freezing and exhausted when he got home. He has excellent winter gumboots but as he was on the tractor doing feeding out he was not moving around and he said his feet were freezing. 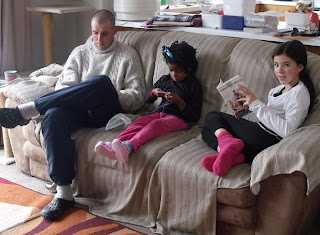 Half his face was frozen too by the time he got indoors. Such a pity that balaclava his mother sent him 3 years ago never arrived. It would have been a great help today.
Hannah having some room time, Ruth getting some french knitting done and so a nice time to sit and read. 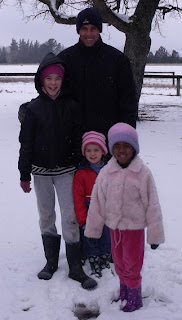 Just after 3 Brendon felt he had some energy back and so it was time to head out again. Mission - to make a snowman. 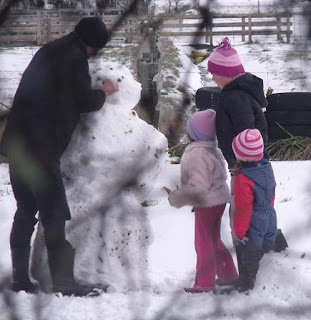 Their first attempt - on the back lawn. As Rachel was wearing my gumboots I could not get out there to take a photo. I took this one through the garage window (through some trees). Unfortunately it was made a bit too quickly and by the time Brendon had the camera out there it had fallen over. So they started again. Ruth made a small ball and then while Brendon and Rachel made the big ones these two played with Patches. 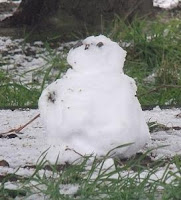 This morning the girls had quickly made this miniature snowman. I am glad I got a photo as Hannah was pleased to announce that she had flattened it a little later (while the rest were putting the big snow man together). 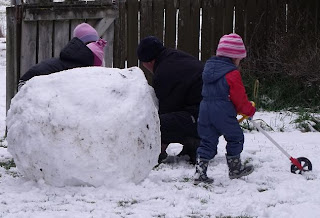 Balls made - now to get the body on. 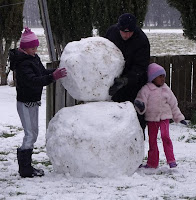 It took a few tries and a change of technique before they could get it up. It was so heavy. 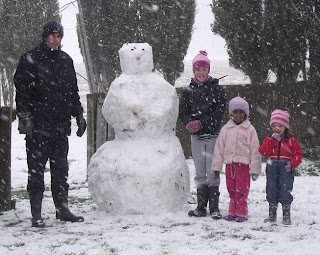 It was now 3:45 and the snow was starting to fall heavily again (accompanied by that bitterly cold wind again). But they were determined to get it finished. I quickly got a photo thinking they would be inside and leave it. 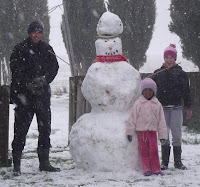 But they kept working and got the face finished. As Ruth had also wanted her ball to be included it got put on top of his hat (which helped the hat stay on).
Then they decided it would be a good idea to have a quick snow ball fight before heading inside.

They had so much fun.

Hannah had one land on her head at one point. :-)
What a wonderful afternoon with memories made that will last a life time.
Posted by Buckland at 8:59 PM