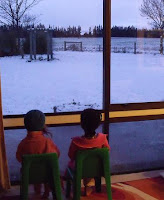 The girls were up early as expected and were so pleased with the white garden. 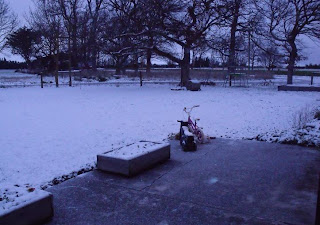 7:40am. There was not enough snow to get the patio covered at this stage - it's obviously just still too warm.

Thankfully it started snowing again while the girls were eating breakfast. This time enough to start building up on the patio too. Tiger was not too sure about all this white stuff. 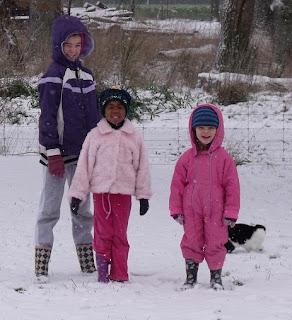 Breakfast got finished quickly and then it was time to get out all the warm clothes and get them bundled up to go out. It was not long after 8:30 and they were out - playing in the snow.
It was so cute watching Patches play in the snow too. She had not ventured out on her own yet - but when she saw the girls it gave her the confidence she needed and she had a ball.
Apologies for the noisy video recordings - my camera makes a terrible clicking sound. I also struggled to get the full effect of Patches' fun in the snow but here's a little snip pit. At the end Hannah is calling the girls over to see the snow that had built up on her motorbike.

Just before 9 they were ready to come in (feet were starting to get a bit cold). So I suggested they make snow angels before coming in. Rachel went first to show them what to do. 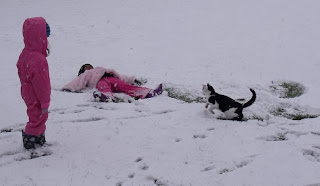 Then Ruth had a go.

And so after two demonstrations (looking on carefully) Hannah decided she would give it a try too. 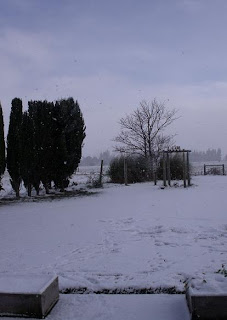 It was strange to see some blue sky by 9:30. At one point we had beautiful sunshine streaming into the lounge with snow falling outside. In South Africa we call it a "monkey's wedding" when the sun shines and it's raining. So is it perhaps a "penguin's wedding" with sun and snow (thanks Michelle for the suggestion). :-) 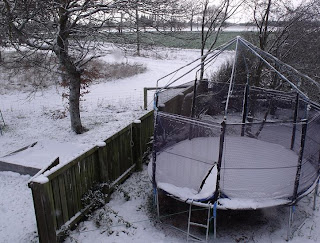 The girls were excited to see the tramp covered in snow too.
By 10 it was snowing heavily again. It's just so beautiful to watch.
Posted by Buckland at 9:00 PM