Rachel was so motivated to get school work done early today that she had it all finished by 10 when we left for Music and Movement. She enjoyed reading a biography while we were out and then straight after lunch got stuck into working on her dress. Brendon had an appointment with the homeopath this afternoon - so she was excited about being able to actually put it on to show him when he got home. The hem is the only thing left to do. She is so pleased.

After she had worked on her dress for a while and Hannah had spent some time in her room I suggested they head outside before it got too cold. I insisted they dress warmly as it was cold today - it started at -3 this morning. So kitted out with beanies and gloves they headed to their favourite spot of this week - the leaves. 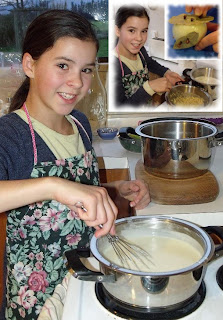 At around 4 I called them in so Rachel could get started on dinner. She watched the Junior MasterChef MasterClass that I taped on Monday night and decided she wanted to have a go at making white sauce the way it had been shown - including using cloves to pin bay leaves to an onion for adding flavour to the milk while warming it up. You then add the warm milk to the butter/flour mixture (I normally just add milk straight from the fridge). We added some bacon and enjoyed a simple pasta and sauce. Good job Rachel.
Posted by Buckland at 9:00 PM