I felt like myself again this morning which I was really thankful for. The day went well and I was reminded of the fact that bad days like yesterday were happening every month last year (and sometimes lasting for more than just a day or two). Thank you Lord for helping me to get out of that.

The girls enjoyed some time outside again this morning - really making the most of the "not quite freezing" temperatures outside. I do make sure they bundle up and I just love the new jacket Hannah was given - our own little Red Riding Hood.
She was watching Patches and Tiger who were both up that tree. They had been playing around and chasing each other and Patches followed Tiger up. I don't think Autumn is the best time of year for tree climbing though as one of the branches Tiger stood on broke and I really thought he would fall. He was so high up too. But he hung on (upside down for a while) and worked himself closer to the trunk. I was thankful to finally see them both down. 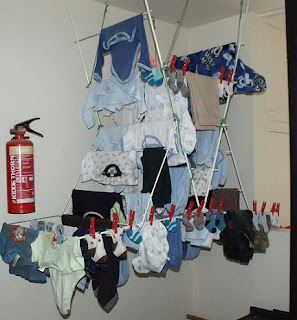 Brendon was working again this weekend (he gets finished around lunch time each day) so we kept ourselves busy this morning. Before the girls headed outside (which gave time for it to warm up a bit outside) they cleaned up the lounge and did the vacuuming. The little two enjoy taking turns vacuuming and Ruth is getting really good at it. It's great that they like helping - I hope we can get that to last.
A friend had given me a box of boys clothes and suggested I just give them all a wash before packing them away for little one. Yesterday afternoon Brendon helped me move the compactum (a baby changing table / chest of draws) into our room and so I got the clothes washed this morning. It will be lovely to get them all packed and ready for this little man. And so very lovely to have all the blues and browns for him. Such boy clothes. Such a nice change. :-)

Not that the clothes are needed soon though. I am now 23 weeks - so just under 4 months still to go. I don't feel like my "bump" has gotten any bigger over the last two or three weeks but that's fine with me. I feel so big already for being only just over half way. I was chatting to a mother at Music and Movement on Friday who is 35 weeks and whose tummy is probably the same size as mine (Rachel said perhaps even a little smaller). She had a 3,5kg baby the first time and said she is bigger this time. She said she has a very long body and so hides baby very well. Very well indeed.

I am already feeling stretched and know that there is still so much more to go. I am loving all the movements baby is making though. He is a very active little one and I feel him moving throughout the day. I don't remember feeling Hannah much during the day because I would often get into bed at night and almost wake her up so that I could just get to feel her moving around for a while. It's totally the opposite with this little boy. He is busy the whole day.
Rachel got her hem done yesterday and was so excited after lunch to put it on for Bible study this afternoon. I did wash it yesterday afternoon but I think it may need a couple more washes for the seams to "relax" a little (especially on the sleeves). It's a strange material and can't be ironed at a high temperature. Rachel is thrilled with it though - and that's what is most important. Well done Rachel - you did such a good job.
Posted by Buckland at 9:00 PM

I'm so pleased that you have bounced back so quickly...let's pray it's upwards from here!! Good job Rachel on the dress...she looks very tall in it!