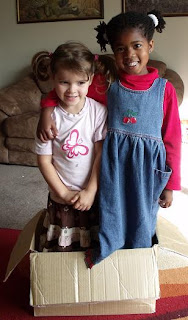 ﻿﻿The girls were excited about all wearing pig tails today.

﻿ ﻿
Patches has been enjoying playing with this box the last few days but today it became the girls toy. They had so much fun playing "Jack in the box". When Dad came home Hannah was hiding in the box and Ruth started dancing around singing the song. I had told Dad she wanted to sing a song for him - so he was watching. As the Jack-in-the-box says "Yes, I will" Hannah popped out. Brendon had no clue she was in there and the girls were so pleased to have given him such a surprise.
Posted by Buckland at 8:00 PM

Love the pigtails! And Ruth's hair looks so cute - thanks for inspiring me to do extensions for Mya again. Now just to find the time....