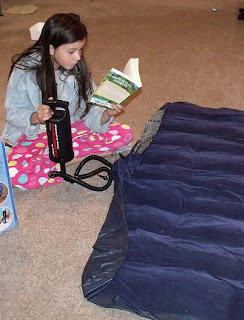 When Rachel went to bed last night she asked us to put the blow up mattress upstairs so that she could start blowing it up in the morning. So it was not a surprise to see her busy this morning. What was a surprise was to see her with book in hand. Lynn gave her this book on Wednesday and she finished it today. It's a book about horses (did you guess). :-) 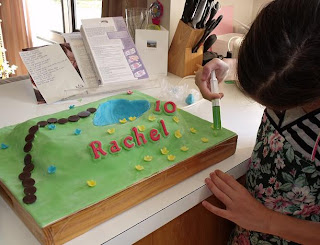 Brendon started feeling ill last night and still felt bad this morning, so he stayed in bed. This meant that Rachel could get her wish - to stay home and work on her cake while I took the younger girls to music and movement. When I left she had just started attaching the flowers. I was glad I thought of using a syringe for the butter icing "glue" as it worked really well. 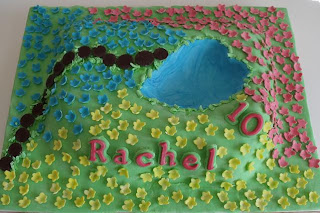 When I got home she was done. I was so impressed. We will leave putting the blue jelly in the pond until just before we light the candles tomorrow morning. We don't know what effect the jelly will have on the icing.

Thankfully Brendon has gotten better as the day has gone. He has spent a lot of time sleeping and I think that was the best thing. We are still not sure what was brewing, but I think the day in bed sorted it out. He is still quite weak and not eating much, but I don't feel he has anything that is worth cancelling tonight for. Whatever he got he is already over it.
A new 2nd hand top I bought arrived in the post yesterday. I got many lovely comments this morning. This tummy really has popped out and it's so nice to have some comfy warm clothes. 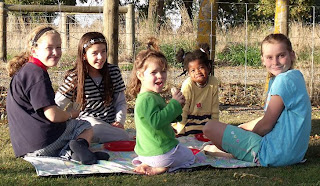 Then after school finished (around 3:30) the girls arrived for the sleepover. It ended up being only 2 girls instead of 3 but they had a lovely time. Here they are enjoying a picnic dinner of hot dogs. They were really good about including the little two in their games but their real fun began at 7:30 when the younger ones went to bed.

I made some popcorn and they watched Ice Princess. I put it on the computer upstairs and they got bean bags to sit on. With it already dark at 8 they felt like they were at the movies. That also allowed Brendon and I to watch American Idols on the TV. When their movie was finished they played a few games and then when American Idols was finished at 10 we told them it was time for bed. Thankfully they were nice and quiet but we heard the next day that one of the girls kept chatting and kept them up till 11. That would not be so bad in itself - but they were up just after 5am the next morning.
Posted by Buckland at 8:00 PM