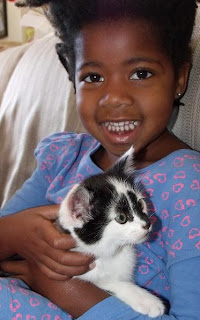 Brendon had to pop out to fetch some flour this morning and when he got back I heard him say "Ruth - come and help me. Open the box. Quickly." So I guessed what it was and came with the camera. A new kitten for Ruth. 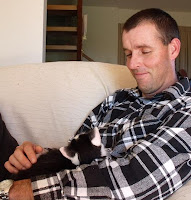 It ended up being very similar to when we got the first two. We happened to pop in to collect some food stuff, had been talking about getting kittens, and just happened to see these lovely kittens who climbed into our hearts. This time Patches chose Brendon. Of the three kittens there she was the only one who came to him. When he put her down to put the flour in the car - she ran into a bush and he thought she would not come out. But as soon as he started walking the kitten came running after him. I wonder if his black and white top had anything to do with it. :-) 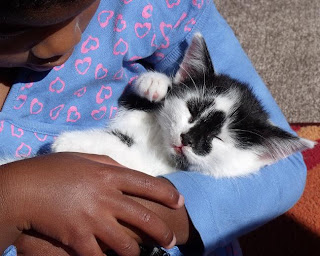 The girls are all so pleased. What a sweet little thing.

So even though Tiger is this kitten's half brother he was not too sure. Having a good sniff but happy to make a quick exit. 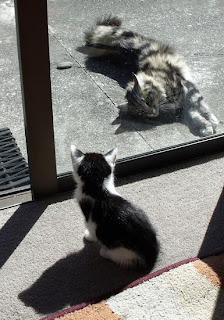 Thankfully he did not run off. He was happy to watch her from behind the door. 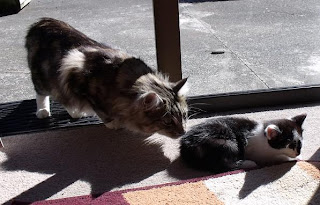 And as soon as she fell asleep he came for another sniff. 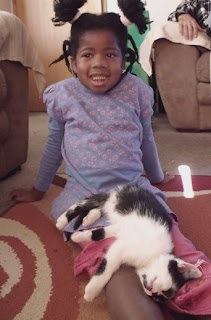 One very happy girl. I am also so pleased that we got a kitten who is again used to children but who is already used to sleeping outside. She is wonderfully affectionate and I am so pleased Ruth will have a kitten to cuddle again. 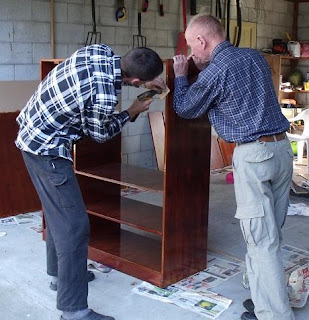 After lunch we got a call from Julia to say that the cabinet doors were ready. What a lovely surprise. His cabinet maker friend had a drill bit that was 5 times more expensive as well as a drill press - so the round holes for the hinges look beautiful.
Julia said they would bring them around. I think the main reason for this was so that Brian could help Brendon try and square up the cabinet. The cabinet is quite old and so it's not all quite straight anymore. This will make it tricky to hang straight doors. But Brian helped to try and get it as straight as possible. 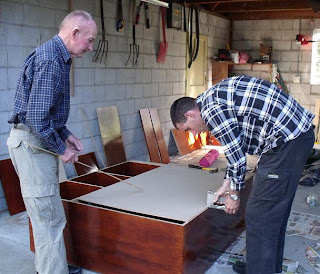 They then put the back board on to try and hold it all in place. Thankfully the back board for the three cupboards on the left is separate. We will need to work from the back while putting the doors on.
I think Brian has enjoyed helping Brendon out with this project. It sure has taken us a lot longer than we first anticipated. 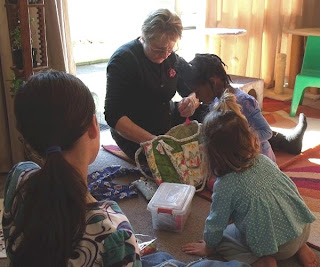 Julia did not come empty handed (as usual). She had brought a sewing project for the girls. 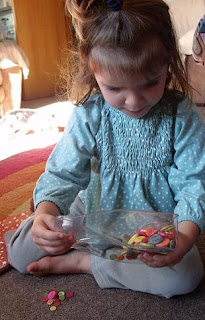 Hannah mainly had fun looking at the lovely buttons. 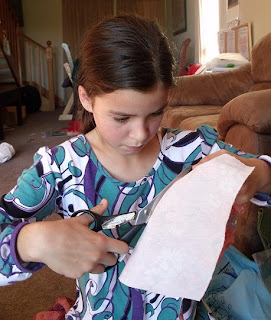 Rachel and Ruth got into it though and Julia got Rachel to do hers totally on her own. She cut Ruth's circles out but just showed her two or three stitches and then said "off you go". Ruth did a lovely job. Julia did help them put the pieces all together at the end.
While they were busy I was checking on the slow cooker pork stew that I had going through today. It would probably have been a good idea to follow an exact recipe for my first time - but as Brendon had cut up pork for me and I had the vegetables that I had - I just had a go. I was a little concerned about the liquid and so added an extra cup of water I should not have added. It was a little watery but was still enjoyed before bible study tonight. I am sure it can only improve from here. 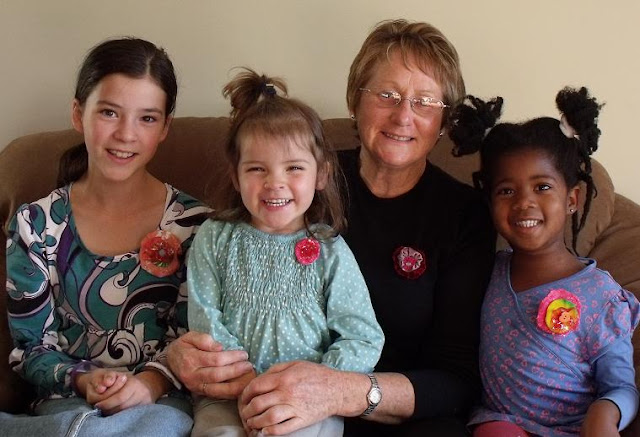 In less than an hour they were all done and they looked beautiful.
Posted by Buckland at 8:00 PM