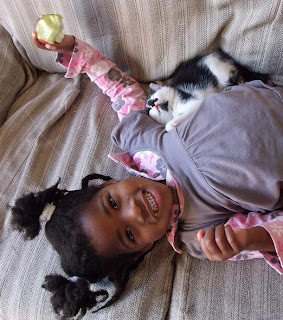 Ruth having morning tea while Patches naps. She is such a cute kitten and when she wants to have a nap she will come up to you and meow. She just loves company (which we all love).
We were all quite thankful when she finally did want to nap as she had been full on playing in the morning. It was so much fun watching her play with Tiger's old kitten toys. 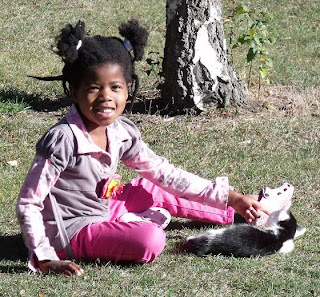 After her nap she went to play outside with Ruth. We are still watching her carefully when she is inside and making sure we take her regularly to the litter box so that she knows where it is. She spent a lot of time outside at the previous home and so they said she is not house trained yet. We hope she will learn quickly. 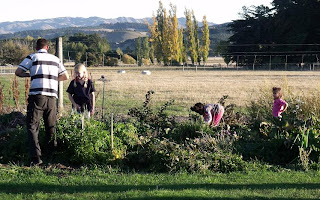 Monday again which means Guides for Rachel. Kerry did transport again this week so Hayley came for a visit. The girls had fun picking the last of the strawberries and raspberries. 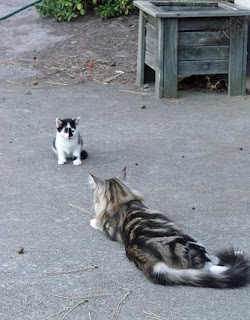 Brendon and I were working in the garage with the TV cabinet and so Tiger had been lying outside the garage (he also keeps us company when we are outside). When we came back from the veg garden Patches followed us back. As she rounded the corner she spotted Tiger and stopped dead in her tracks. 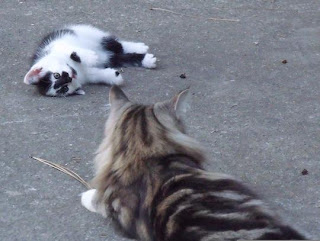 Thankfully Tiger did not run off and so she got to show him she only wants to be friends. So sweet. 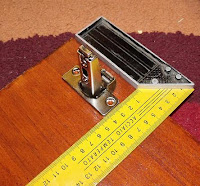 And for the update on the cabinet. The hinges are now attached to the doors. Brian lent Brendon this lovely tool to make sure they were straight as he said this was crucial. If this part is not screwed on properly the door will never hand straight. So we diligently worked on this and even got the first door attached to the cabinet. That's a much harder job though, so it may take us a few days to just get the next step done. But it's fun to see it all coming together finally.
Posted by Buckland at 8:00 PM