When Nick and Lynn left yesterday afternoon the wind had picked up but it was not too bad. During the night however it got even stronger and woke poor Ruth up who came to ask us if there was anything we could do. Her window was closed though so we tried to get her settled but I did not sleep really well from then on. The wind was just so strong. 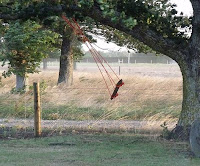 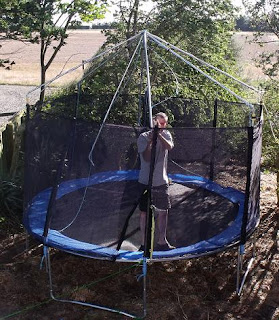 By 6:30 I could see the tramp was already taking strain from the wind and by 6:40 some of the damage was clear. This has by far been the worse wind we have experienced since being here.
By 8:30 the wind had calmed down enough for Brendon and I to get out and get the canopy off the tramp. Brendon tried to get the poles back on but they were just too bent and even with my help they would just not get back on. Hopefully when we have one or two others to help we will manage. The girls got to play outside for a bit before the next lot of gales came through. 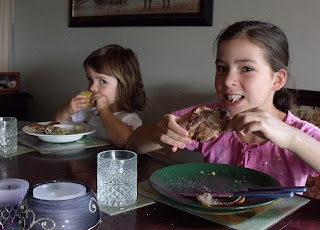 Tiger decided to spend the day inside - away from the wind. He decided this spot under Ruth's chair was a perfect fit. He slept here the whole morning.
It was nice to still have left overs for lunch today. Hannah and Rachel enjoyed tucking in with their hands. The only logical way to eat corn on the cob and chops. 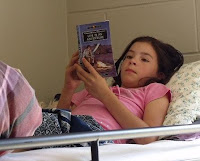 We were all still feeling a bit tired from our late nights so we all had a nice quiet afternoon. Rachel thought she would read in bed and try to have a nap.

As I expected she got a lot of reading done (and no sleeping) but it was still a nice rest.
And can you believe that at 5pm Tiger was still under Ruth's chair. Such a funny cat - sleeping with his paw over his eyes.
Posted by Buckland at 7:00 PM