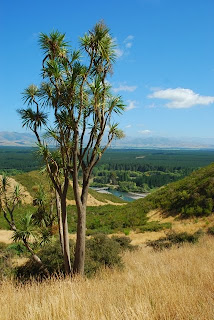 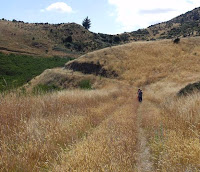 This morning we went for a walk up to the lookout point that Rachel and I went to with the Brownies and Guides for our year end function. It is really dry now but extremely pretty because of that. Ruth did amazingly well and walked the whole way up. This photo on the right is one that Lynn took on the way up. So beautiful. 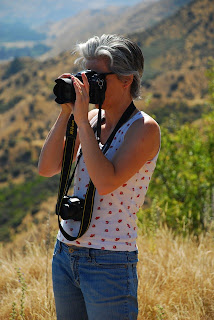 Nick suggested I take a photo with his camera and while I was having a look Lynn got this photo of me. It was amazing to see the difference between my little camera and these big ones. Having a look at their results too makes me very aware of the differences. I have a lot to learn about photography though before I even think of getting such a fancy camera though. 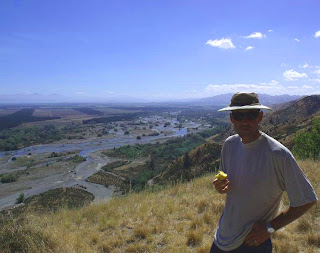 It was nice to get to show Brendon and our guests this lovely spot. 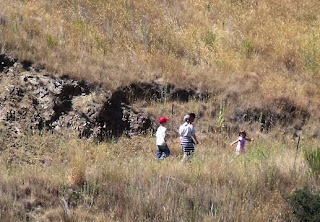 Hannah started out walking but the first section of the walk is probably the steepest and her little legs were very quickly sore. So she got in the backpack and was carried all the way up. On the way down however she had loads of energy and ran with the older children for quite a way. She actually set the pace for quite a while. We saw them way off in the distance with little Hannah out front. 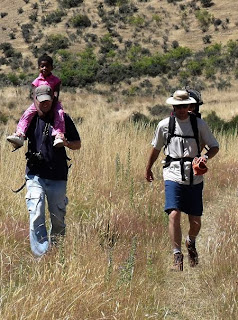 After the long walk up we understood why Ruth asked that she go in the back pack for the trip down. Soon Hannah was back asking to be carried. So Nick carried her for a while. A little later Ruth decided she would like a turn with Nick so this was how the last part of the walk was done with the little two. 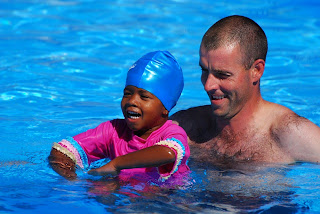 We enjoyed the home made pasta when we got home and then after Hannah's nap we headed down to the pool to cool off. A stunning photo of Ruth with Brendon taken by Lynn.

And she got one of me doing my typical pool entry. I don't know what it is about just diving in. Perhaps I have nothing to think about but the cold water. So doing a back flip always gets me in quicker. 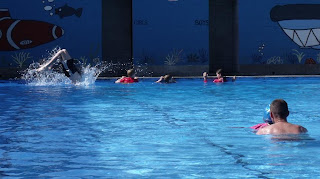 The water was not very warm today so Hannah and I did not stay in for long. The rest of the group seemed to be ok with it though. 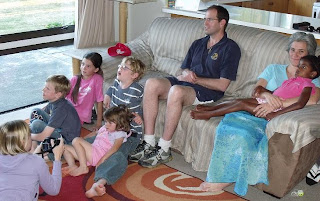 Then it was home for a BBQ. After a very physical day for the children it was suggested they get to watch a movie. There was a little debate on what to watch but when Hannah suggested "Chitty Chitty Bang Bang" there was a very clear "yes" from the boys. They only watched the first half though (I was very thankful for the intermission) as it was already 9pm and our little two are normally in bed by 7:30. Lynn enjoyed getting some beautiful photography done (and Brendon got a photo of her in action). 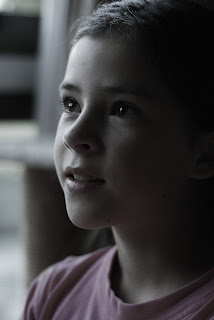 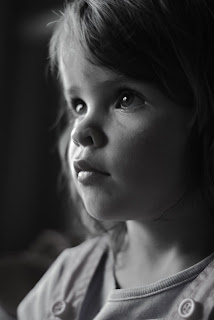 Here are some of her results. 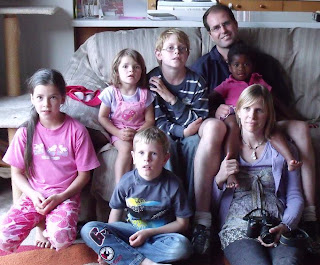 A lovely quieter evening (and slightly earlier bedtime) for the children and then we stayed up till late chatting again. It has been wonderful to get this time to know each other better. We have been "acquaintances" since Brendon and Nick studies together 10 years ago (with our first borns arriving within 12 days of each other). Lynn and I have been following each others blogs for years now (with them spending a number of years on the Island of St Helena) but it was nice to finally get so much face to face friendship building done.
Posted by Buckland at 11:00 PM

I was sorry not to get better photos of Ruth - but there's always (hopefully) March!