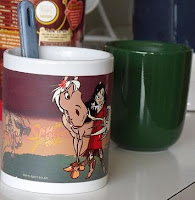 I made a start to sorting out my pantry and with that came the girls spotting the milo (which has been sitting there un-used). So they were really excited about having milo to drink today and Rachel enjoyed showing Ruth how her special cup works (they cup is mostly brown when cold). The only problem is that it's a huge cup - so Rachel only has about half and so only half of the picture shows up. She still remembers Nana giving it to her (and I remember that the first one was dropped and broke so this was the replacement). 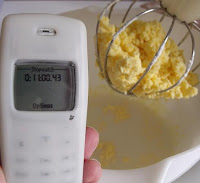 I got some more butter made this morning. The difference in leaving the cream for 3 days before using it is huge. It only took 11 min today (compared to 30min when the cream was only 1 day old). 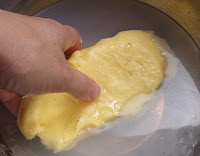 I also learnt about rinsing the butter. So this time there is no buttermilk drops within it. 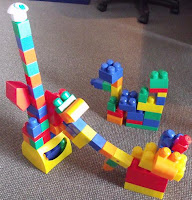 This afternoon Ruth and I went back to the homeopath for a follow up. This is the building she got done while we were there (she insisted on  fetching the camera from the car so she could take a photo). It seems very likely that the remedy she has chosen for me is the right one as things have been so much better. So I got a repeat of that. Thankfully Ruth's hay fever has been clear too. She had drops for only 2 weeks and I was so thankful that her eyes have been fine. She has not needed antihistamine or eye drops. There are a few other things that we were hoping the remedy would help too (like her sore legs) which have not improved so Ruth has a new remedy to try. It was helpful that Ruth was more relaxed today as it gave the homeopath a better idea of who she is. She was so quiet on her first appointment but today she was chatting and excited about different stories she wanted to tell. So we had a good visit and I pray that the new remedy would be the right one.
Posted by Buckland at 8:00 PM