Hair, cows, cats and a dog 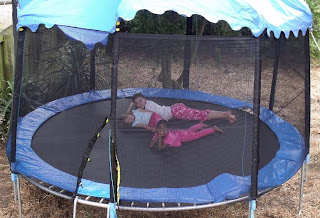 The girls got out to the tramp soon after breakfast. 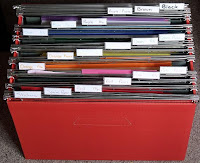 It gave me time to get some sorting done. I finally bought a concertina file while we were in town yesterday, so it was great to get all my coloured paper organized. 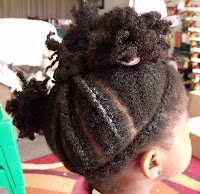 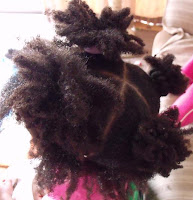 After morning tea (once the girls had already spent quite a bit of time outside) I got started on Ruth's hair. It was Charlotte's Web as entertainment in the morning (the animated version - another of Rachel's dvds that Ruth and Hannah have not seen before). For those who are interested in how this one was done I took a couple of photos through the process. First I split the hair into four sections. 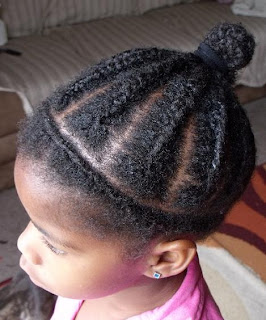 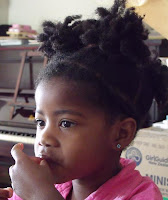 Then I created a "crown" section which I put in a "corn row" (similar to a french plate - where you plate and take more hair in as you go). Then I split each quarter into three and did a corn row from the "crown" up to the top of her head. 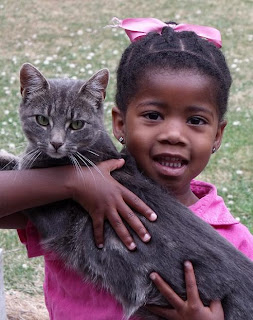 We got quite a lot done before lunch. She looked quite pretty with the crown and two pom poms on top. It's just a pity you can't leave the hair loose - it would knot so very quickly. So after lunch entertainment was Alice in Wonderland (another first viewing for Ruth and Hannah) and we got the style finished. I was really impressed with how it turned out. And we were done before 3pm.
It did not take Rachel long to decide that the little bun needed a ribbon. I just love this photo of Ruth holding Smokey. 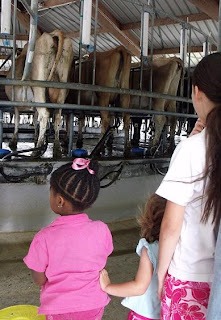 I had asked the dairy farmer if we could come and get some more milk this afternoon at the same time at quick they milk so that the girls could get to see how it's done.

It was lovely to see the cows up close. We often spot them over the road from us - but it's quite a distance from the house and they are only little specks. 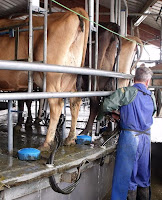 It was lovely to get to see the set up and all that is involved. It's quite different to the dairy farm Brendon and I visited well over 7 years ago. The cows come onto this round section which turns slowly. They eat while they are milked and by the time they get to the other side of the circle they have been milked and off they go.
There happened to be a cow come through while we were watching that had been marked. Her milk is obviously not to be used but she still needs to be marked. She is well marked (paint as well as the red tape on her foot) and so a bucket is attached and the milk goes in there rather than the big tank. 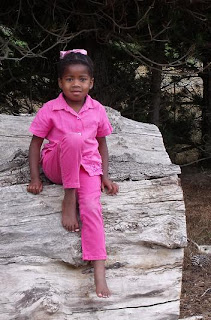 It was so nice for the girls to get to see exactly where the milk comes from. The next time we come get some milk from this big tank they will know what was involved in getting it there.
A lovely school outing this was. :-) 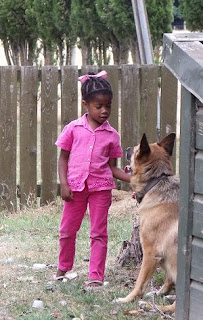 Over the next two weeks we will be dog sitting Jaz. We have been wondering how Ruth would feel about having a dog at the house but she is enjoying her so much already. 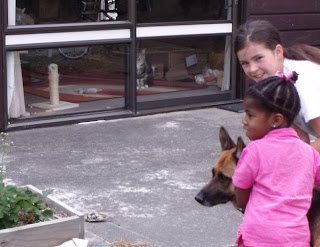 The cats however are not at all impressed. I like this photo with the cats checking Jaz out through the glass door. I just wish it stayed that peaceful. 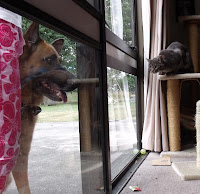 It did for Smokey. She was quite inquisitive. 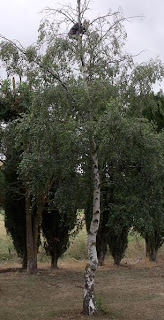 Tiger on the other hand was petrified. He ventured onto the front lawn later and got such a fright from Jaz coming over to say hello that he went straight to the top of this tree. 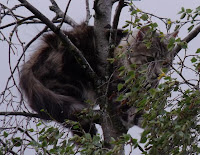 At first he looked really comfortable up there. Just feeling safe from his look out. 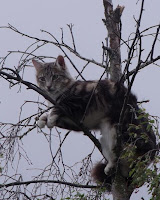 But then he looked like he may be stuck. So Rachel took Jaz for a walk and Brendon and I got Tiger out the tree. Eventually Brendon had to shake the tree to get him to even start trying to get down. It was a wonderful relief when we finally did get him down. I do hope he copes ok with this obviously unwanted guest (at least in his mind).
At least Jaz feels welcomed by the girls.
Posted by Buckland at 10:00 PM