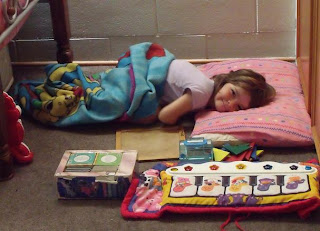 This was Hannah playing this morning. I love how she comes up with her own imaginative games and that she will choose to sometimes just play on her own.
The girls had a fun time at music and movement this morning. After the singing they got to decorate some old Cd's. There is a Christmas Tree festival on in December and so their artwork will decorate a tree for that. As soon as they were done we headed home as I had such a headache. One of the mothers asked "have you been drinking enough water" and I realized the headache was due to the intense heat that we have been having and the lack of water that I have been drinking. 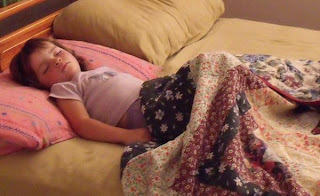 So I forced myself to get some liquid down. I added some apple juice to the water to help. After 4 glasses I was feeling slightly better but was just exhausted. So I put Hannah on our bed and we rested there for a while. Eventually she fell asleep and my headache was gone. It really has been such a hot week. I think it's so funny that so many South African's think of New Zealand as always being wet and cold. Far from it. :-)
Posted by Buckland at 7:00 PM

Labels: These make me smile