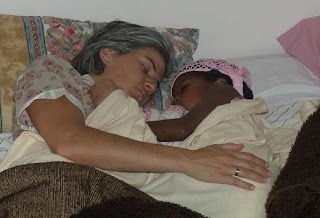 Yesterday Ruth had struggled with eating as she had a small mouth sore. She had also complained of sores on her feet and we did see very small spots on her feet and wondered if the sand had hurt her feet (we did not relate the two at all). In the evening she started with a temperature though and had a really rough night. Thankfully it was a warm night and I was not struggling to keep myself warm as well as keeping her cool. She had a restless night and I felt much more comfortable with her in the bed with us where I could regularly check her temperature. It amazes me that as a mother you can be so in tune with your children that you can - by touch - feel a change in their temperature. Thankfully we were able to keep it from getting too high but were still quite worried about her - wondering what could be wrong. 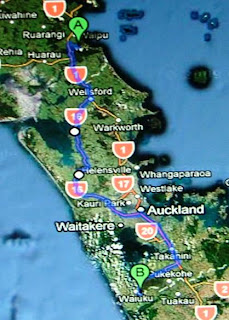 We had 215km to drive today so after breakfast we started off. We decided to come down on the West side into Auckland - through Helensville - just for a change. It was very beautiful.
Once we arrived at our destination (at Jason and Michelle again) I took Ruth to the pharmacy to see if I could get something for her feet. By now her fever was better but her feet were worrying her. The pharmacist asked if she had the sores anywhere else and my first response was "no". He said "nothing on her hands, or mouth?" and then I realized she did have the sore in her mouth. I then had a really good look at her hands and realised there was a tiny one on her one hand too. What a surprise to hear "Hand, foot and mouth" mentioned as the possible answer to what she had. Thankfully I could phone the Health Line once I got back to Michelle's place and also did some reading up on-line. It has nothing to do with the animal "Foot and Mouth disease" and although HIGHLY contagious it is not dangerous at all. Just a viral infection with fever and sores for up to a week.
So we spent the evening finding alternative accommodation in New Plymouth as staying with a family of 12 with an infections child was not an option.
So it was quite a day. We were very disappointed to not get to stay with the family in New Plymouth as originally planned but it was also a good lesson to the girls that we don't always have things work out the way we would like. We need to trust in the Lord and just adjust our plans as needs be.
God is good - all the time.
Posted by Buckland at 7:31 PM