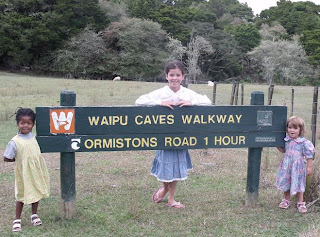 This morning we headed off to Waipu Caves. The girls were all excited about this new adventure and Rachel had so many questions. Looking back I realize she was asking all the questions so that she could overcome some of the concerns she had. 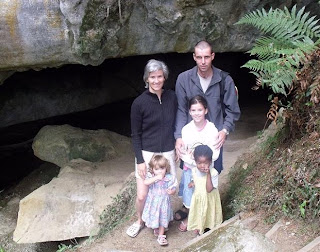 As we arrived someone was leaving, so we took photos for each other. :-) 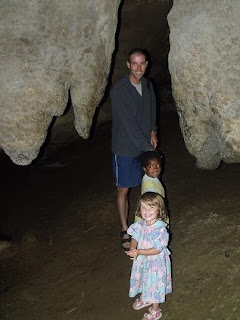 We had borrowed an extra torch but still felt we needed more light for us all. The little two were really brave and Rachel got really scared at the start. We went off to the right without her (she decided to stay at the entrance) but it did not go very far and so we were back with her within a couple of minutes. By this stage she was crying and determined to overcome her fear and go with us. 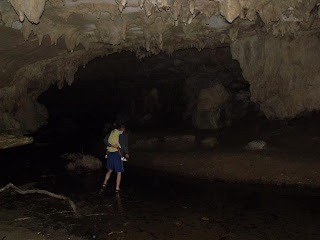 We had read about water in the cave and bringing appropriate footwear and even perhaps a change of clothes. The water was very low though and only got our feet a little wet. Brendon first carried Ruth over. 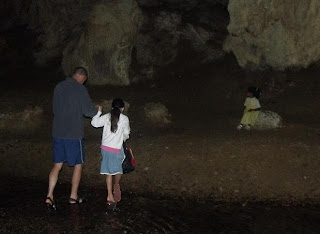 And then he came back to help Rachel walk through. She again was really nervous but knew she did not want to stay behind. So she faced the challenge and realized it was not that bad.
Brave little Ruth just sat in the dark as they crossed as I had the one torch and Brendon had the other. Well done Ruth. 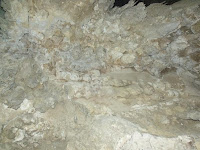 We were all so thankful we crossed over the water and got deeper into the cave because the further we went the more glow worms we saw. This is a photo of the "roof" of the cave, and I so wish I could show you how amazing it is to see hundreds (probably thousands) of glowworms. Apparently this is one of the best glow worm caves in New Zealand. The bonus is that entry is free. :-) 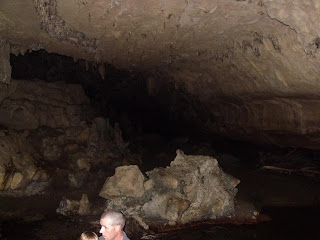 If we had had better torches we would have liked to have gone further. But Hannah was starting to get a little uncomfortable with the dark. By this time Rachel was completely relaxed. It was an amazing experience.

We still had time before lunch to enjoy the beach. There was a boogie board at the house that we brought down.

Hannah was very keen to give it a try. 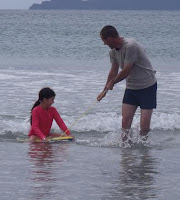 Rachel had a lot of fun too. Starting off siting though - just to be safe.

So much fun. Even though she fell off once.

Rachel tried on her tummy but was not keen on the water splashing in her face. 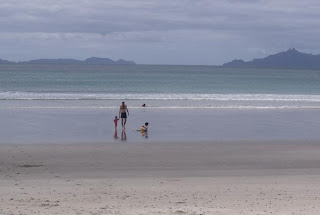 Ruth was very brave in the cave - but not with the waves. At least not on a boogie board. After taking this photo we all headed into the water. Even though it was overcast it was still warm and the water was lovely.
Rachel had her second fear to face as we wanted to get past the breaking waves and enjoy the swells. Eventually (with Brendon and I each having a child in our arms) we pulled her in (almost kicking and screaming). And again - once she had gotten in she had a wonderful time. We stayed in for ages and all had a great time in the lovely big swells (big enough that I had to even jump or "swim" over them). 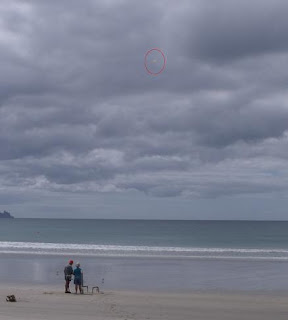 We enjoyed watching this old couple with their huge kite. It was at least a meter wide. You would not think so with how small it is in this picture but they had quite the set up. They had a boy that would float beneath the kite and they had kilometers of line. It just went further and further. Eventually we could not even see the boy on the water - let alone the kite in the sky.

Dad got to do some boogie boarding before we left (showing Rachel how it's done).
We had a great morning and made some wonderful memories.
Posted by Buckland at 1:51 PM