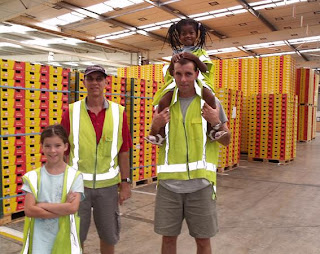 This morning we headed over to see where Richard works. He has been in IT for many years and so it was with interest that we learnt about what he does at the biggest physical kiwi fruit pack house in New Zealand (2nd largest in terms of company size).
Behind them you can see all the boxes ready to be packed with the gold fruit. The gold fruit has gotten far more popular internationally and many farms have been changing their vines from green to gold.
Ruth and Hannah did not have closed shoes and so had to be carried. Ruth however still wanted to wear a special shiny top. :-) 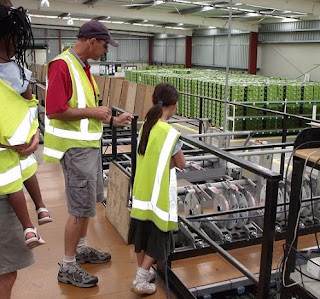 Having a look at the sorting machine. Very similar to the peach farm that we lived next door to in South Africa.
How many of you knew that there were more than just green and gold kiwi fruit. Even within each of those 2 there are a number of different types of fruit just as you would have different types of green and red apples. 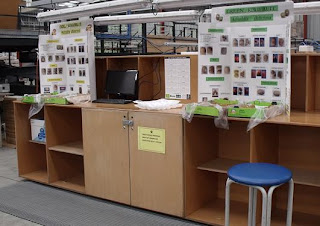 Here is a sorting station where the fruit from each farm is tested and checked. 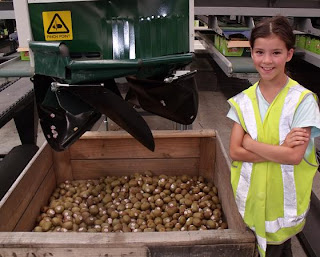 And we recognize these big crate boxes - when kiwi fruit season has really gotten going and our local prices drop nice and low then it's these big crates that are in all the shops. Often the prices of kiwi fruit drop down to between $1 and $2 per kilo. So you can see why such a huge amount is needed. 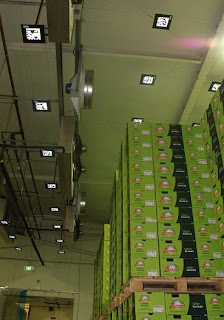 One of the 30 odd HUGE freezer rooms. If you look on the ceiling you see those black and white blocks. Well it's from those that Richard is able to tell you were every single pallet is within this entire warehouse. The whole place is done like this so that every time a pallet of boxes is moved the computer system tracks it and and knows where ever one is. With Brendon working in warehousing some 10 years ago it was amazing to think of what this technology means to warehousing now days.

It was also great to learn some fascinating facts like the root of the kiwi vine goes down 10 meters into the group. It is also relatively quick to change from green to gold. They cut off the green vines, graft the gold on and only miss one season of fruit. Quite amazing. 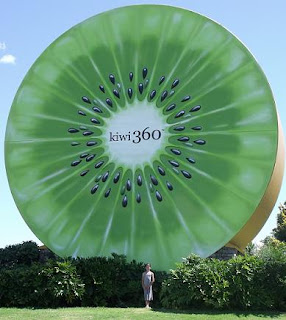 Then we went to look around the Kiwi 360 shop which is not far from Richards work. We got to taste a new kiwi fruit that is the size of a grape and different kiwi fruit jam. Brendon and I got to taste some kiwi fruit wine too. 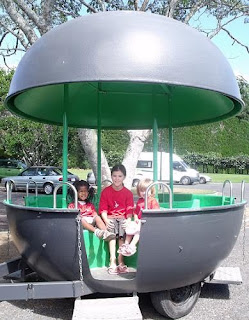 The girls were disappointed to not go for the tour but could at least get to sit in the kiwi fruit looking carts. We chose to rather use the money to buy them some T-shirts. :-) 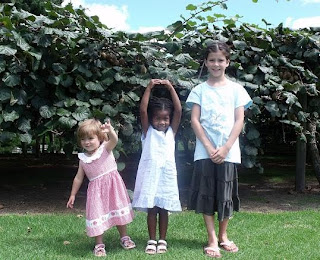 At least here we could get quite a bit closer to the vines. 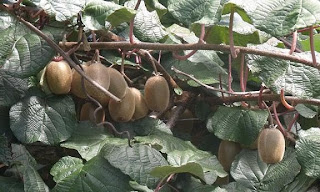 Great to see up close how the fruit grows.
Posted by Buckland at 7:00 PM