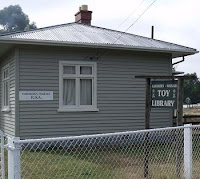 We made it just in time to the Toy Library to sign up and get a tractor ride on for Hannah. It's taken me 2 1/2 years to finally get here. I have heard many people talk about how great the Toy Library is and I am sure the girls will enjoy the different things we get through the year. 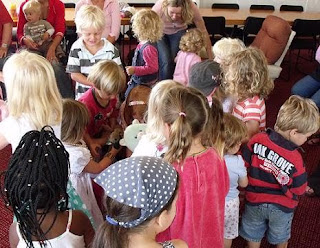 Then we headed off to Music and Movement. A nice group of children were there today and the girls got into it really quickly.

They really enjoyed the songs with the parachute. They enjoyed bouncing a teddy in the middle and moving it at different speeds according to the music. 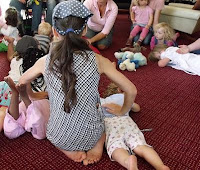 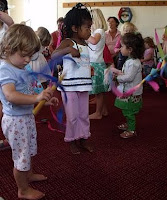 A quieter song where they get a massage of their backs. Then time for ribbons.

It's a faced pace 30 min and then time for a biscuit. 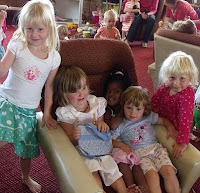 And free time to just play and make friends. They gave each other turns getting spun around on this chair.

We had lunch as soon as we got home and Hannah was bushed so she headed off for her nap. This gave Ruth the opportunity of the first ride on the tractor. I had just seen a blue one and thought Hannah would like that. But now I see it's not the best choice as you need someone to push it. Rachel was a willing helper thankfully and enjoyed some imaginary play with her. 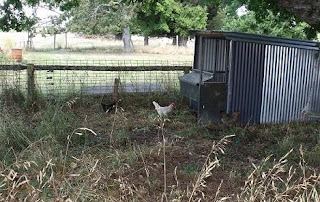 It was great to also see the chooks are settling down in their new area. Rachel decided to leave the shed door open so that they can get familiar with it. Their entrance hole is now on the other side. 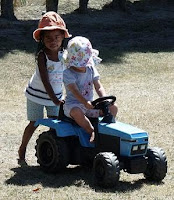 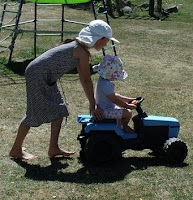 As soon as Hannah was up she was on the tractor. Ruth gave her a push around but got tired quickly (it was really hot out). So Rachel took over for a while but then we had a bit of a performance when there was no one left to push. I decided this was not worth the hassle and phoned to find out if we could change it for another.

So we stopped past the Toy Library on the way to the pool. Brendon watched the little two so that I could get a nice swim in. I got 30 lengths done quite quickly and really enjoyed it. 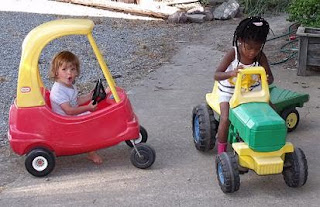 The girls really like the replacement ride-on's (I decided to rather get two as well). Although Hannah can't move herself much on the tractor she can at least ride on her on in the car. 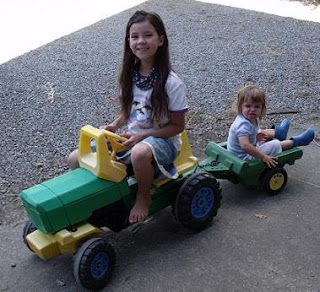 Rachel is also pleased as she can fit on this one and then give Hannah a lift in the trailer. Hannah was not impressed that she had stopped for the photo though.

Rachel was pleased to have Youth Group start up again this year. The exciting news is that they are going to have 2 meetings a month this year. She asked for a French plait and it's probably the best one I have done so far. I actually find it much harder to work with than Ruth's hair because it just slips out so easily. We were both pleased with the result.
Posted by Buckland at 6:37 AM