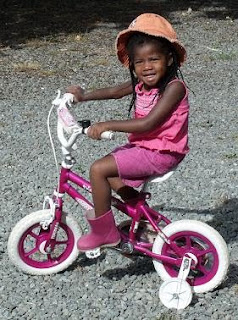 While I took Rachel to ballet Ruth told Dad she wanted to go for a ride on her bike "on the drive". So off they went. Brendon did not expect to even get to the gate as previously it had been too difficult for Ruth to ride on the stones. But today she managed fine and was determined to get down to the old postbox which is 500m away. They had a break when they got there and Ruth was telling him how she would like to ride down the road and then go along the other road. He was just concerned that she manage to get back. So she rode 1km today. Quite a distance for such a little girl. Well done Ruth. 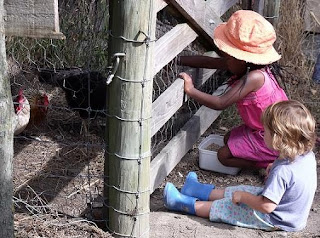 The younger two were quiet for a while so Brendon went out to check what they were up to while I got dinner ready. They thought the chooks needed some extra food (even though they have a feeder that always had food in it). This is one advantage of the new area. The girls take scraps to the chooks each day and now they are able to go into the area with the chooks and try and feed them from their hands. Thankfully the younger girls can't open the gate. But it was nice to see the chooks were interested in what they had for them. 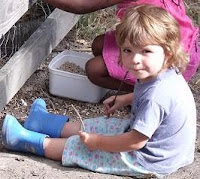