Laid Him in a manger

"And she gave birth to her first-born son; and she wrapped Him in cloths, and laid Him in a manger, because there was no room for them in the inn." Luke 2:7
Isaiah 53:2 "For He grew up before Him like a tender shoot, and like a root out of parched ground; He had no stately form or majesty that we should look upon Him, nor appearance that we should be attracted to Him."
Christ "emptied Himself, taking the form of a bond-servant, and being made in the likeness on men." Phil 2:7

Brendon took this photo of Hannah and he won the competition this week. So two more free movie tickets won. That makes 5 wins in 5 month in a row for our family. Not bad. :-)

Hannah has loved blue for a while now but will call everything blue. Over the last few days though she seems to be able to recognize blue as well as orange. On Sunday she picked up someones orange and said "orange" (well - her version of it) and so I think that was what made it click for her. Quite funny to see her starting with her colours as Ruth has only been learning them over the last couple of months. I think Hannah may do this quite a bit with what Ruth is learning. 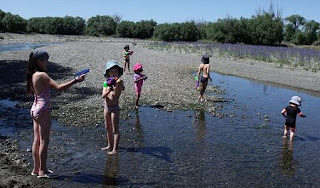 Ingrid came for a visit today with her 3 children. We headed down to the river for a play and a picnic lunch. 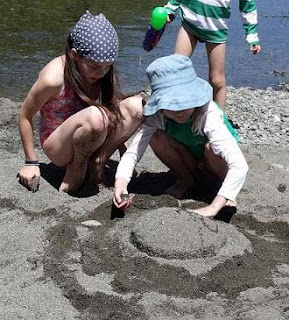 Rachel and Layla are already the best of friends. 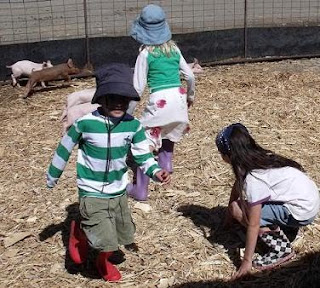 After the younger girls had their afternoon nap we headed over to the pig farm for them to see where Brendon works. They had fun trying to catch a piglet. Brendon caught one for them for them to touch. 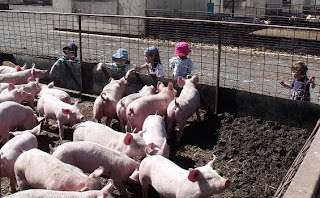 Then we showed them how to just stay still and how the inquisitive pigs will come over to give them a sniff which the children all thought was great.

Looking at the bigger pigs these two climbed up onto the top of two bales of hay (only one picture here - they were quite high up). 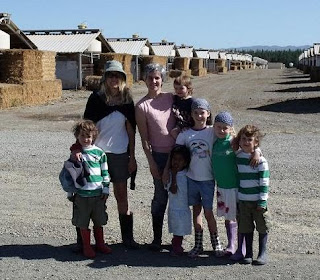 We had a lovely day visiting and look forward to many more visits in the future. Please note the matching head scarves of Rachel and Layla.

After dinner Rachel and I headed over to her Brownie leader who is also a French teacher. She said she would lend us some French material over the holidays. Rachel looks forward to saying something to her in French at their first Brownie meeting next year. We had a lovely hour visit with her and were glad to be able to get a packet of biscuits to her for Christmas too.
Posted by Buckland at 10:48 PM