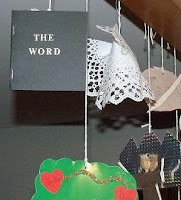 There was a special church meeting planned for today with a picnic lunch afterwards. So I decided bacon and eggs would be a good breakfast as an excuse to have extra bacon to make bacon, mushroom and cheese rolls. I made the dough last night and finished them off this morning. Yuuuummmmmyyyyyyy!!! 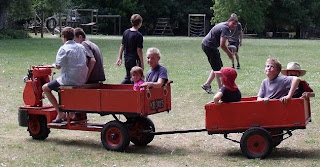 Hannah getting a ride in the "train". 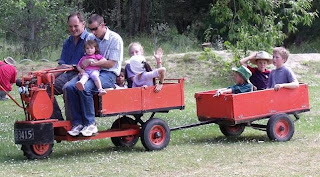 Rachel and Ruth joined in for the second ride. Hannah started crying when Brendon wanted to put her in so he ended up sitting at the front with her. She settled down quickly and enjoyed the ride. I am sure it was the loud noise that worried her as she was very excited when she first saw it. 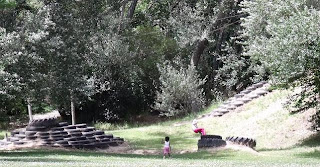 The girls spent ages down at the play area. They have wonderful swings here too with a very high flying fox. 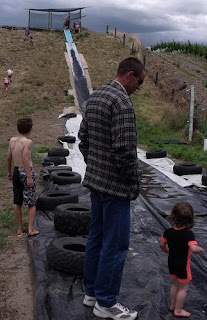 Then just before we left the water slide was on and so just before the rain came they got a few slides in. Hannah had to stay at the bottom. This picture gives you an idea of how very high and steep the slide is. When I saw it again I started wondering if it was a good idea for Ruth to try. She would definitely be the youngest one on it today.

But before I could even talk to Ruth she was up the hill and on her way down. Just after the photo she flipped around and ended up coming down on her back, head first. She was not worried though and had another go. I told her to keep her feet open and so she went really slowly off the top slide part and came down very slowly. So she had another go without stopping herself and flipped again. She was very brave and even though she said it hurt her a little bit - she said it was still fun. Rachel did not take as long to have her first go as last time and when she realized that Ruth had gone 3 times, she quickly went for her 3rd slide. 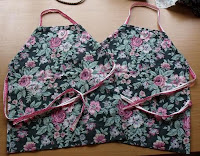 This afternoon while the girls napped (eventually - it was after 3 by the time Hannah was asleep) Rachel did the 2nd apron all on her own. With the first one I showed her what we would do at each step and helped her line the machines up ect. With this 2nd one she did ask me a couple of questions but I did not do any of it at all. So she is excited to have 2 more presents to give to her sisters.
A couple of weeks ago Rachel had said something about how nice the tree would look with all the presents. Brendon then said "but there will only be 3 - one for each of you". She looked at me (as I normally give a joke away) and I said "no - it will be 5 because Rachel has bought a present for each of her sisters". So she expects just one present and is totally fine with that. She decided to buy Brendon and I a small gift each (and told me now there would be 7) and today she was excited that there would now be 9 presents.
She knows the cats were a big present for the girls but we have also bought them an adjustable netball hoop (and netball). Brendon picked it up when he was in town yesterday. So that will be a lovely surprise for her. And the fact that they will each get a couple of extra little presents from us as well. I am glad she is not focused on what she will be getting but is really enjoying being able to do things for her sisters.
Posted by Buckland at 8:54 PM