"By faith Noah, being warned by God about things not yet seen, in reverence prepared an ark for the salvation of his household, by which he condemned the world, and became an heir of the righteousness which is according to faith". Heb 11:7
"For the coming of the Son of Man will be just like the days of Noah.... And they did not understand until the flood came and took them all away; so shall the coming of the Son of Man be.... Therefore be on the alert, for you do not know which day your Lord is coming." Matthew 24:37,39,42 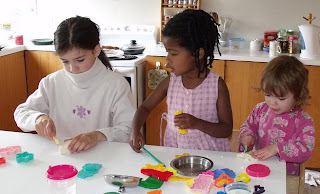 We made salt dough for the first time today. Hannah kept saying "play dough" as she loves play dough but also knew that this was not the normal lot she plays with (and they don't every play in the kitchen with it either). 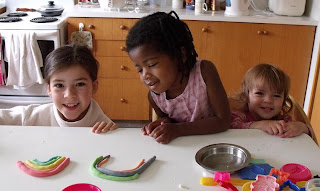 Once she saw the colours that I had made she kept saying "blue" until she had a blue peace to play with. And no - I don't thing she knows her colours - but she does like saying "blue". The older girls made their own rainbows. 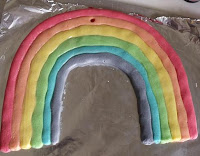 Our ornament rainbow ready for the oven. I decided to put some water on to help bind the different colours and discovered (after cooking this and others) that the water helped a lot in keeping the colours bright. So we learn as we go.
I also tried to make some cinnamon-applesauce ornaments (as the oven was already on drying this lot out) but it was not successful.

This afternoon Rachel did her first "report in" at the library for the summer reading programme our district is having over December and January. She got this folder and has already completed 8 books. They are only required to report in 4 times through the holidays but there are enough lines for 50 books and I am confident Rachel will do very well in filling all those lines. 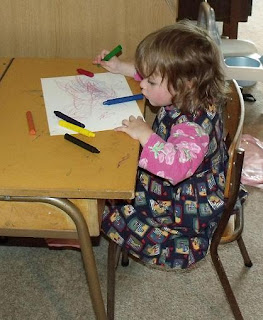 While the older two bathed to get ready for going out Hannah joined me upstairs. She has really gotten into drawing since having the bath crayons and now with our daily drawing for the Jesse Tree. She thought it was very special to be sitting at Ruth's desk to draw this evening. 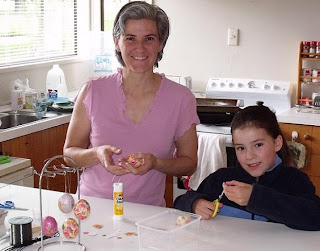 We had a bit of time before we left so Rachel and I had a second attempt at our egg ornaments. 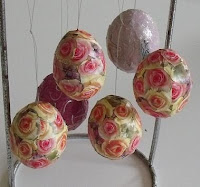 Our first attempt where the pink ones at the back which had ballet stickers on. But the stickers where not sticking and the glue I used to try and get them to stick was a disaster. So we pulled out the good old glue stick and had much more success with the flower paper we used on these. I was impressed that we got 4 done so quickly. There are for presents for Ballet and Brownie leaders, so they need to be done before next weekend. 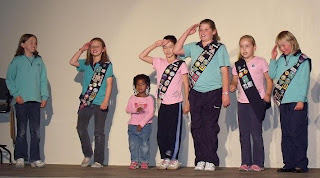 The Lions' Club has a Christmas concert every year where people from the community perform. So this year the Brownies sang three songs. Ruth was excited to join them on stage and was not at all shy about being in front of so many people. Well done Ruth.

I think Ruth did very well for her first every appearance on stage.

We stayed through the first half of the evening and these bag pipes made a big impression on us all. It was lovely to see such young boys playing and they played really well. But I think the biggest impression was the volume. They definitely are instruments that should be played outdoors. Boy was it loud.