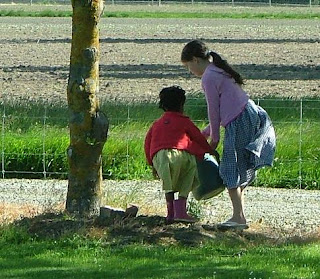 Every morning Ruth and Rachel head out to feed the chooks and this week they have added watering some plants to their outside jobs. It was a bit windy out there this morning but they even did more than what was asked. It's mainly flowers on this side of the house as well as their strawberries in the planter boxes on the patio.

We started a crystal growing experiment today with Table Salt, Epsom Salt and Rock Salt. It was interesting to see how much of each salt we could get dissolved in 2 cups of boiling water. 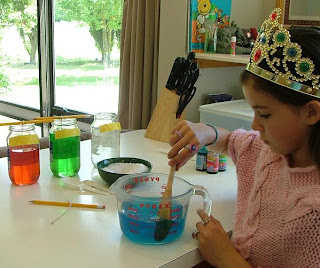 We added some food colouring for fun. We hope we will get nice crystals growing on the string (and not on the top of the liquid or on the jar). Our last sugar attempt was not successful.

Have you ever wondered why some hard boiled eggs peal easily and other don't?
I have wondered that often and I finally have the answer. The newer the egg the harder to peal. So I have had a dozen eggs set aside for over a month now so that I can hard boil them. And even after a month they are only just lifting off the bottom of the pot. So imagine how old the eggs are you buy in the shops.....
So - the reason is that when they are fresh they don't have any air in them. The older they get the more air gets inside the shell. That's why if an egg floats - throw it away - it's bad. But a little bit of air helps the pealing process with hard boiled eggs. That tiny bit of air gets between that thin layer and the shell - making it easier to peal.

It was time to bake bread for Ruth again and I always feel I should use the oven as it's already hot. But I wanted to try something different for a change. So I made a pineapple upside down cake. I have not made one in almost 20 years - boy that makes me feel REALLY OLD!!!!
If anyone from Willow Ridge High has the recipe we used please send it on to me. :D
Posted by Buckland at 9:29 PM