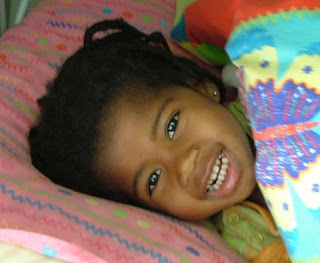 Last night Ruth told us she did not want a nappy on. So just like that she has decided that enough is enough and although she never has a dry nappy in the morning, this morning she had a dry bed. Well done Ruth!!!
We left the bathroom light on for her and so if she needed to go in the night she just took herself. She has also been very good over the last week or two in having no more little accidents during the day either. So it seems it has all just fallen into place for her. 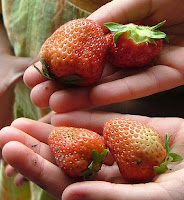 The girls enjoyed picking the first of our strawberries today. Although they could do with getting a little bit riper - they did not want to take the chance of loosing them to the birds.

I got a lovely surprise today in that I won the weekly photo contest again with this photo of Ruth and Hannah picking flowers before the lawn got cut. Thankfully the vouchers are valid for a year - so there is no rush in using the tickets.
Update on Hannah - she has had a good day today. Although she still had a fever for a number of hours through the day I can definitely see a huge improvement. By the end of the day though I could hear a different cry to what we have been having the last week and so checked and saw that she has two molars coming through. Poor thing. From a cold and cough to a viral infection straight into teething. The previous set of molars weren't too bad (much less of a problem than the eye teeth), so hopefully it won't be too bad.
Posted by Buckland at 10:53 PM

Congrats on winning the photo contest!!