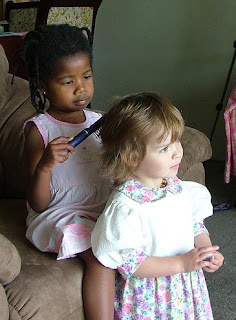 It was so lovely to see Hannah up and about today. Ruth gently brushed her hair for her this morning.

Ruth has been enjoying playing around on the piano lately. What I enjoy about her playing is that it is gentle and soft - not the typical banging that most young children produce. I also thought it was lovely the way she uses both hands and all her fingers. You can also hear Hannah in the background. It's so nice to have her feeling better. What a wonderful sound. She had almost 6 days of no talking at all. So it makes us thankful for little things. 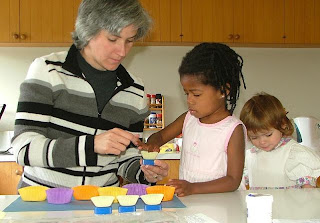 We finally got a bit more done on our craft today.
Dad had the day off today but was off to town by 8am. He did some shopping and then went to have 3 fillings done. It cost even more than we had expected. The appointment was for 11:20 and he sure did not feel like eating afterwards. So by the time he got home around 1 he was starving. He managed to eat a few things but I made roast chicken for dinner so that at least he could have his favorite meal today. 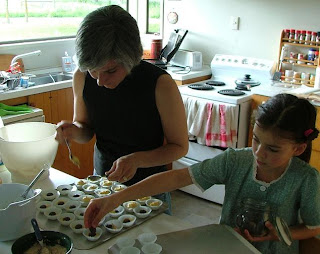 This afternoon Rachel and I made cupcakes for her Brownie Rainbow Party tomorrow. Rachel put a chocolate button in the centre of each one. So if there are other cupcakes at the party at least these will have a little surprise when you bite in. 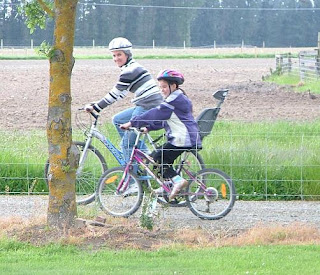 Our "big car" was in for it's WOF (Warrant of Fitness) today. We had dropped it off yesterday afternoon after Rachel's Ballet, but to keep us from having to all go to fetch it today, Rachel and I decided to ride into Hawarden. It's only a 6km ride but for the first km all we were talking about were our sore legs and bottoms. We also had quite a juggle in getting the two bikes into the car. But eventually we managed.
Application for Assessment for Adoption
We got our Application sent off today and were glad that we could already include our medical report. Brendon had dropped them at the Medical Centre on his way to town this morning with a note for the doctor that did our Residency Medicals. We were hoping he would remember us well enough that another consultation would not be necessary. We got a lovely surprise this afternoon when we got a call saying the forms were ready. So Rachel and I went to pick them up after fetching the car. What a blessing. 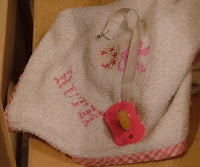 When Ruth told Grandpa and Nana that she does not wear a nappy to bed anymore they asked her about her dummy and blanket. At first she said she still wanted them and I said she would give them up when she was ready. She then said she would not sleep with them tonight. And so she left them in the kitchen. We don't think it will last though. It did show that she is able, but I don't think she is ready to give them up yet.
Posted by Buckland at 7:37 PM