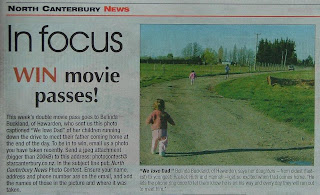 What a surprise when I got the paper this week. I won the photo competition again.....
The caption reads: "We LOVE Dad. The girls get so excited when Dad comes home. He lets the phone ring once to let them know he is on his way and every day they will run out to meet him.”
So now we will have 4 movie tickets. The plan is to perhaps find someone to look after Hannah so that we can all go watch a movie. It would be Ruth's first time which would be great fun. 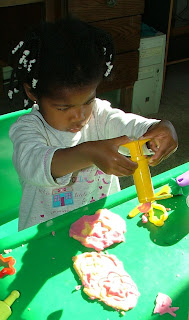 Ruth was given some play dough for her birthday and decided to include some of it with the home made dough. 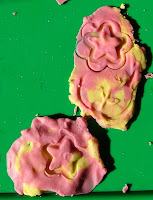 So a colourful combination resulted. I normally don't allow colour mixing (that organizing side of me), but realized if she wanted to use it this way then they could have the fun (even if it only lasted for one day). I was really impressed with Ruth's star within a flower. It gave Rachel some inspiration too. 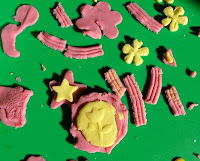 Rachel made some lovely creations. 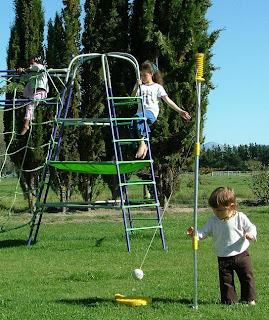 The girls really enjoyed the beautiful warm day and spent ages outside (the climbing frame and sandpit bringing much fun). It gave me a good opportunity to get some weeding done too. 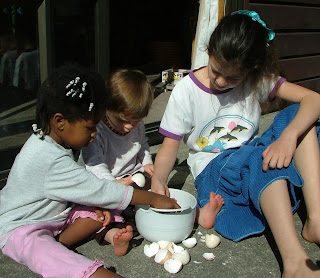 Crushing egg shells to give to the chooks. It's really good for them to get the shell pieces to eat, but you have to make sure it does not look anything like an egg (otherwise they start pecking at their own eggs in the nest). 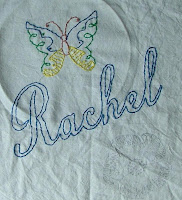 Rachel's sewing is coming on really nicely. She is really enjoying it too.
Posted by Buckland at 12:52 PM