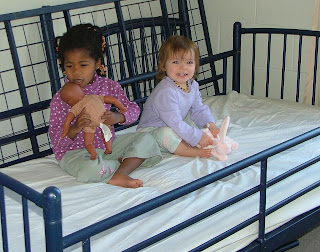 Hannah had started playing with the pieces of the bunk bed, so I decided to rather make up the one section. It would give her an opportunity to learn to get on and off safely before she moves into it as a bed. It has become one of the favorite playing places. 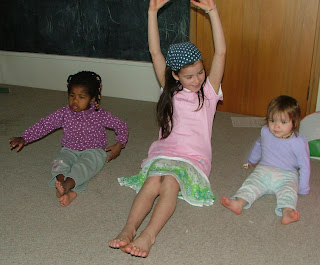 As soon as Rachel starts her Ballet practice the two younger girls will join in. I could not get a photo - but both little ones do their arms really nicely already.

Today I had to cook up all that meat Brendon cut for me last night. I had an appointment at 3, so I started in the morning preparing all the veggies. It took me a number of hours today but it was worth it as there was so much food I had to cook it in two lots in the pressure cooker. I also add all the softer veggies after the meat is cooked otherwise they totally disappear in the sauce. So here is what one pot looked like after the other cooked veggies were added. And even though there was a different selection of veggies available this week, I still managed to get 7 different ones included. So 7 seems to be my perfect number with veggies. :-)
I was also so thankful to Julia who came to watch the girls for me. When I phoned her this morning she offered to come here and I just said "don't worry I will bring them to you". But she called back and said she would come here. What a blessing. Not only that but she brought us some fresh eggs, some muffins (wheat free so Ruth could have) and pieces of material for Rachel to do some sewing with. I so thank the Lord for her.

This is the view from our gate to the drive. The girls walked almost all the way to meet Brendon this afternoon - almost 500m.

A zoomed in shot as proof. Just as Dad arrives home. 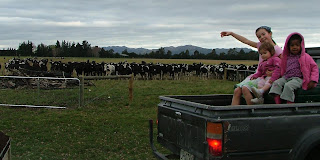 The cows will almost always run over when a vehicle comes past. The girls enjoying a ride on the back of the ute.

Brendon got a trailer load of compost from the office. The farm manufactures compost with all the manure they have and so we were thankful to be given some.

Just to show you how much space those cows have - and they all come running when they think someone has some food for them. They have been moved to these fields outside our study window. So it's been nice to watch them. 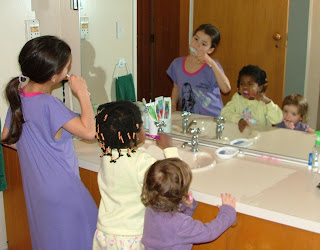 Hannah really enjoys brushing her teeth. It's just like with a bath, if she hears the word she is up and off.

And I managed to get 10 meals out of my cooking today. So the freezer is getting nicely stocked up. The only negative was that I did not have enough containers the same shape.... hehehe.... Brendon's teasing has helped me to laugh at things like my liking everything the same. So although I would prefer all the containers to match, if I can I will but if I can't it does not bother me. Although you can be sure we will use those odd containers first.... :D
Posted by Buckland at 2:02 PM

what are those containers that you store the meals in? They look like big ice cream containers, am I right?

Yes, the are 2 leter ice cream containers. I don't fill them though. When I made the chicken a few weeks back I put in enough for 2 extra - so used those when we had friends join us for dinner. I just leave it out for the day to defrost (or put it in hot water if I only remember at lunch time) and then warm it up in a pot.