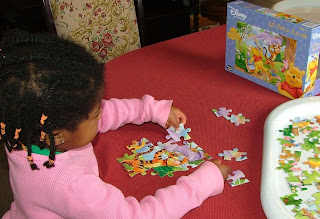 Ruth got this puzzle for her birthday and I will be honest - when I saw it was a 60 piece I thought it would be a while before Ruth would be able to manage it. But she was so excited about trying it that she had a go this afternoon. I sat and asked her what she wanted to do first and would give her tips like "what's next to ..." ect and she did really well.

Putting in the last pieces. 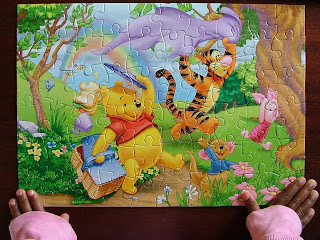 She was also really motivated to get it all done and did it in one session.
This photo also reminds me to tell you about her fingers. When we moved on Saturday I noted that her small finger's swelling had come down. Well this whole week her fingers have been fine. We have had NO SWELLING AT ALL. We are so thankful. It is perhaps a combination of the herbs having had time to work and now being in a warm house.
The doctor did phone yesterday and said he wants to see her and make sure everything was fine. So we have an appointment to see him at the hospital in town next Friday. We are praying that the herbs and warm house continue to keep them down as we don't want to start the medication that the doctor would suggest if there is still inflammation.
What is also amazing is that she has not been on her strong anti-inflammatories since Saturday either. Praise God!!! 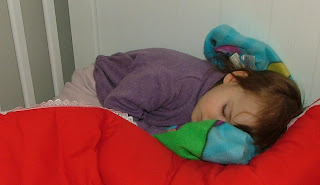 When Ruth was finished the puzzle she headed to bed for her nap and this is how I found Hannah. On the outside of the cot bumper. :-) So it may be a while before we can move this wiggly worm into a "big" bed.

Brendon had started with a sore throat last night and this morning was feeling really terrible. So he slept the whole morning. Because he was home though, I popped out while the girls were sleeping to take Rachel for her Brownie lift club at 3. After dropping her off I stopped into the local store to get some fruit and heard some children talking about the colouring in competition that had ended a week ago. I heard one boy ask "who won" and the reply was "a wee little girl named Ruth Buckland". WHAT??? A huge smile spread across my face and I went to chat to her. She told me her picture was outside so I quickly went to have a look.
Well done Ruth!!!
When they take them down they will keep Ruth and Rachel's pictures so I will be able to take a closer photo of both. Ruth had watched Rachel colour in the Happy Birthday and so she had copied her with that and worked so very carefully.
And her prize.... 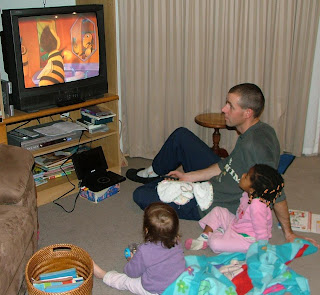 A portable DVD player!!!!
When Ruth woke up I asked her if she remembered the competition - which she did. She remembered that she got a bottle of spring water when she handed it in (every entry got a bottle of water or juice). So I knew she remembered. I then told her she had won and I showed her the prize. She was so excited. She had been given "The Bee Movie" for her birthday but it would not play on our SA DVD player. So Dad got her portable player connected to the TV and she got to enjoy her present and prize.
When I collected Rachel I told her that the competition was finished. I then said to Ruth (who had wanted to travel with to fetch Rachel) "who won" and with a big grin on her face she said "I did". Rachel was so excited. She was just bubbling.
Posted by Buckland at 7:20 PM