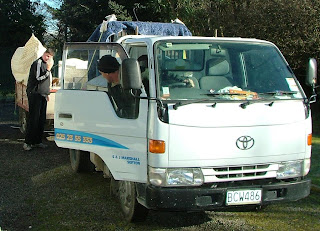 At 9 this morning vehicles and trailers arrived to load everything up. This truck even had a hydraulic lift on the back which made it easier with some of the heavier things. The one trailer was so big they put the whole climbing frame on in one piece. I wanted to get a photo of it all packed on but they were off before I got a change.
The little two only woke at 8:30, so I got them dressed and took them over to Lynn (our neighbour) with the breakfast with so that they could eat there. It was such a blessing to have the girls looked after as things really moved very quickly at the house. 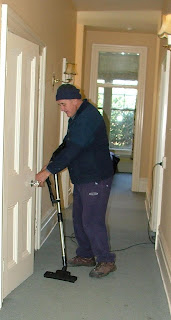 And as the rooms were emptied one of the men went around vacuuming. Maureen came again today and helped pack up the last of the kitchen as well as cleaning out cupboards and wiping things down.
By 12 the house was empty expect for a few odd things in the kitchen and that was also the only room that still needed the floor cleaned.
What a blessing. 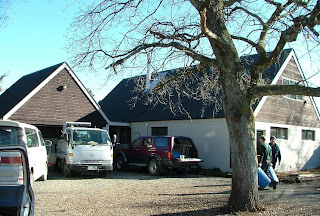 So I picked the girls up and we headed over to the new house. By 12:30 we arrived and Brendon had already gotten the girls beds set up (he had to take the bunk bed and the cot apart to get them into the bedroom). So I got the beds made while Maureen warmed up a big pot of soup for lunch (as well as sandwiches and pizza and scones that people had brought with).
By 2 all the vehicles were offloaded and everyone was fed. The girls were in bed but not asleep. Poor Hannah and Ruth have really been struggling with their coughs the last couple of days and so I tried to get them settled while Brendon and Maureen went to finish up the kitchen and lock everything up.
Once the girls were asleep I had a little rest which meant getting my computer set up (a rest is doing something you enjoy that will help you relax and feel motivated to carry on working - so this was my choice). Then it was back to work and I brought most of the boxes into the house. Most of the big furniture had been put in the house but the boxes and smaller items were packed in the garage. So as soon as Brendon got home he started sorting through the garage so that we could at least get one of the cars in there for the night. Eventually we just had to say "enough for today".
Thankfully there were left overs for dinner and finally by 8:30 the girls were all asleep. Brendon and I were exhausted and were very glad to crawl into bed at 10 (which was so good as the last two nights had been close to 12).
We are so thankful to God for all the wonderful help we had for this move and we are very excited about our new home.
Posted by Buckland at 1:52 PM