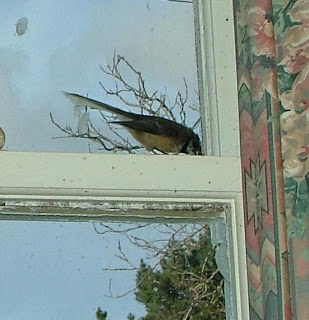 Today Ruth had a follow up appointment at the hospital. So Julia came over so that Rachel and Hannah could stay at home. The photo is of the bird that flew into the house while the door was open and we were seeing Julia off.
Today the specialist who we normally see had actually called someone else in (perhaps even a senior to him I think) to give some input on the case. She had a few other blood tests that she wanted done and has said they will make an appointment for us to come back next week. I think if nothing clear comes up on these tests they are wanting to start her on Methotrexate (as a treatment for Juvenile Arthritis) which is a very strong drug that is even used in treating childhood cancers.
They were not interested in doing x-rays and so from their side I think they have run out of other options. Last Thursday her entire right hand was swollen and the poor little finger that had been swollen was even worse. So although they were down slightly today the doctors still got to see a swollen little hand. I think for next week's appointment Brendon will have to be along because it will be a lot easier for him to say "no" to the drugs they are wanting to use. We are in the process now of trying to see if we can get a second opinion. We pray for wisdom for us and healing for little Ruth.
Posted by Buckland at 4:44 PM