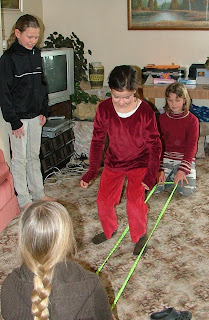 Rachel was invited to a birthday party today and because it is a bit of a distance for us to travel, we had graciously been invited to stay too. The family have 7 children and only have a party for a child on the even birthdays and they may invite only invite as many people as 1/2 their age. Ruth was invited to Danielle's 4th birthday party in January.
Julia was turning 8 and got to invite 4 guests - so Rachel felt very privilege to be included.
They had SO MANY games organized and Rachel had a wonderful time. 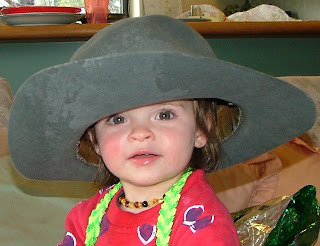 The girls in this family all love children, and so I think they really enjoyed having Hannah and Ruth there too.
What an adorable little girl (ok - I am biased).
Poor Hannah started with a runny nose this morning and during the party her temperature went up too. Her right cheek was very red and I think those eye teeth were worrying her a lot. But she did really well at the party even though she was not feeling very good. 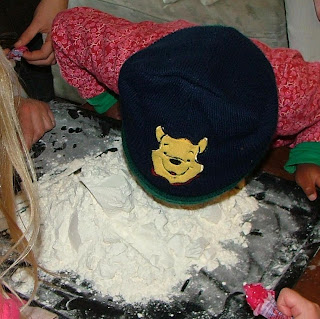 One of the many games. Ruth knocked the lolly off while "cutting the cake" and so had to try pick it up with her mouth.

You can see she was a bit nervous about getting a load of flour on her face. Even though this was the second time they were playing and someone else already had a face FULL of flour. 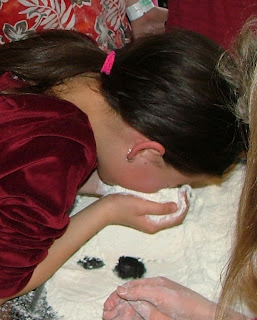 But then they all decided to get floured up.... And even Rachel built up the courage. 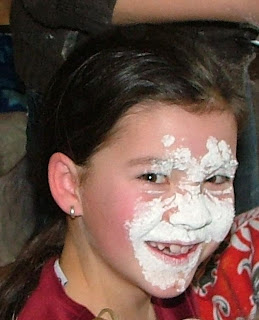 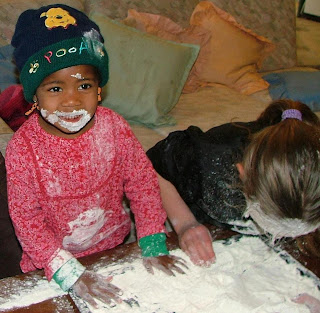 So Ruth had another go too. 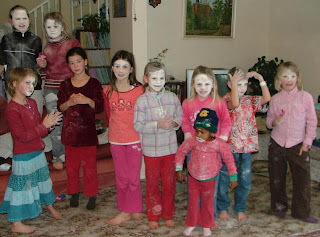 Unfortunately Rachel had already washed hers off by now (it was hurting her eyes) but you can see how much fun the girls had. You may also notice that there is a lot of RED. Julia's favorite colour is red and so the guests were asked to wear red. We had fun in that all 4 of us had red on. It was such a good idea.
We all had a lovely time and it was especially good for me to get some time away from the house and all the boxes.
Posted by Buckland at 8:33 AM

Labels: These make me smile