Weekend in the Lewis Pass 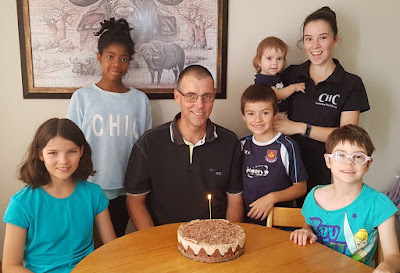 We decided to celebrate Brendon's birthday with his cake this morning before Rachel headed off to work, and before Asher headed off to her carer for the weekend. 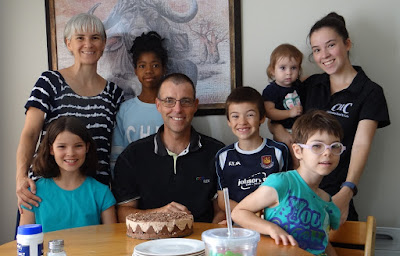 The Toblerone cake was a hit for my birthday, so it was decided as the best option this time too (it will serve as a great morning and afternoon tea through the weekend too).
BELOW: Beautiful scenery on our trip up. 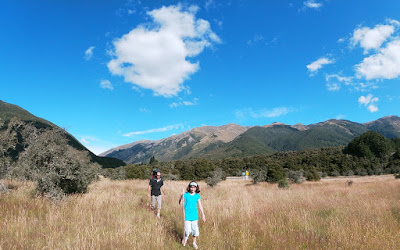 We were blessed with the use of a holiday house up in the Lewis Pass this weekend. We had a nice relaxing Friday. We didn't leave too early as we had planned to have lunch in Culverden on the way up. Rachel was working till mid afternoon, so when she arrived she was quite tired. So she stayed home while we went out for a short walk down to the river on the other side of the main road. 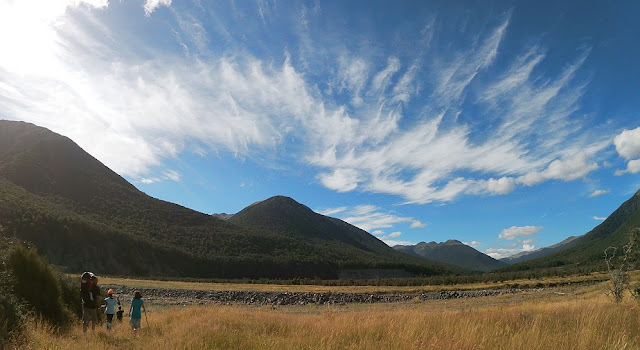 I forgot my phone charger, but thankfully had my new GoPro to try out (mainly bought for an up-coming swimming weekend). It was nice to make a Quick Story video with the good photos. I had over 130 photos from the weekend, so had to just pick the best ones to add. 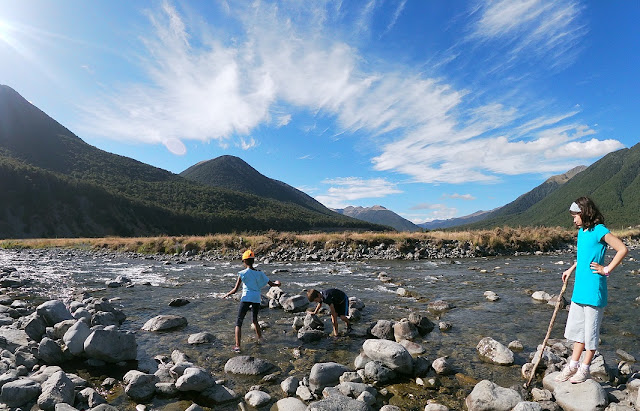 The sky was just so beautiful.
The video quality is not that great - designed for watching on a phone really. It was quick and easy to get made though, so it will have to do as a record of the fun. 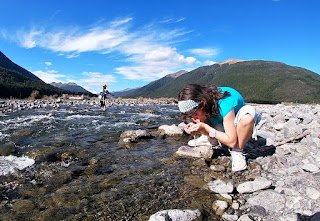 And a photo taken from one of the video clips that I really like. :-) 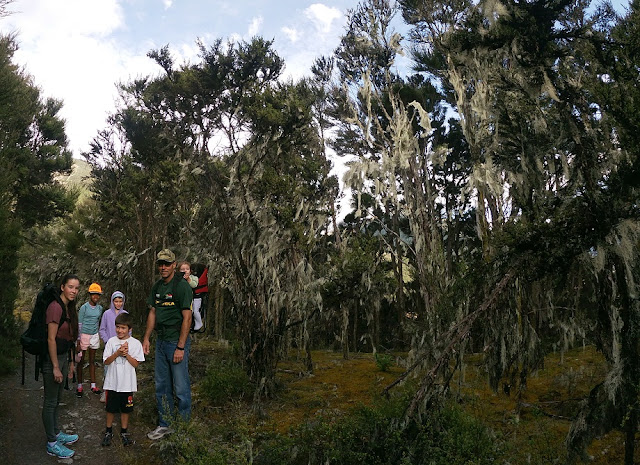 On Saturday morning, before 8:30, we were already out on our first walk. We did the Loop 1 today as they say each loop can be an hour. So this was the test to see how we would do. It only took us just over half an hour. It was really beautiful. This was my favorite photo. 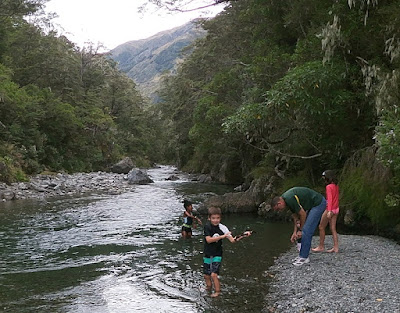 As the walk was so much shorter than we had planned, and Anastasia wasn't due for her nap yet, we decided to try find the spot in the river that is good for swimming. We made a wrong turn after finding the old chimney, but soon found the right path and the children had so much fun. It was so beautiful.
The water was freezing, but Anastasia even wanted to spend time with her feet in it. Eventually the sand flies forced us to head back to the house. 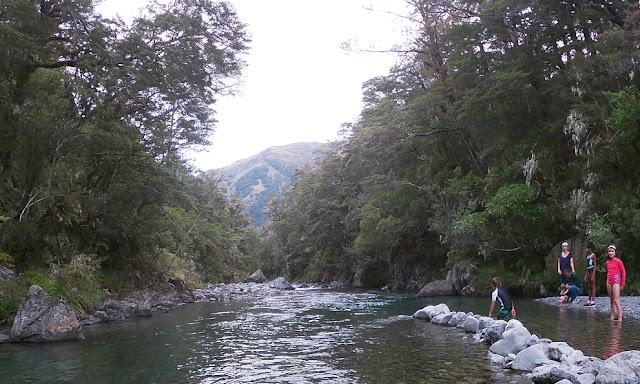 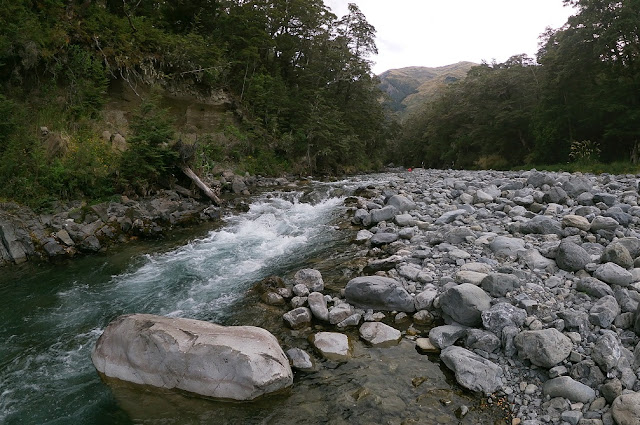 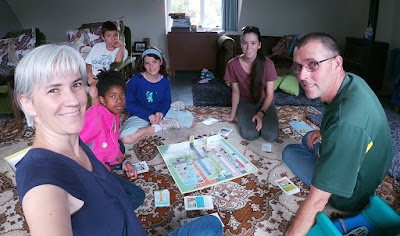 While Anastasia napped we played a few games 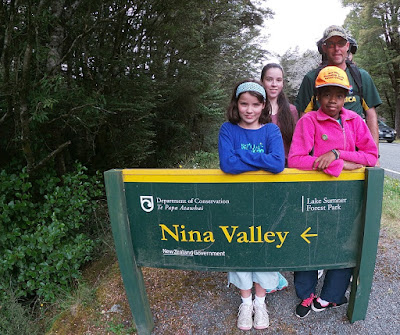 And then after lunch we decided to get another walk in before the rain arrived. We took a short drive to the start of the Nina Valley walk that Ruth often goes on with the Kiwi Watch group at school.They hike all the way to the hut and empty traps and re-bait them. It was so nice to see some of what she does. She was able to show us a trap with a ferrit in. The highlight was the swing bridge. :-) We walked for about an hour and the rain started just as we got back to the car. 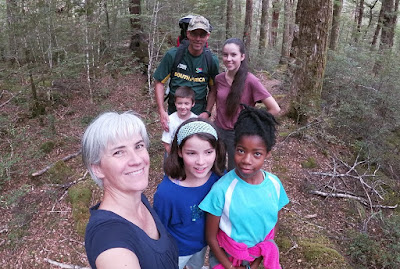 Nice to be able to get family selfies. 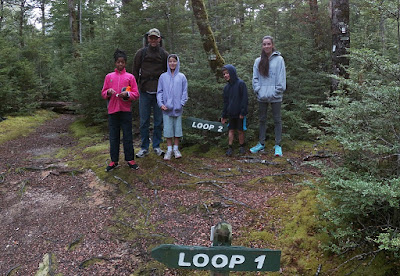 It stormed Saturday night. Hannah did especially well as the house moved a lot in the wind (especially for those of us sleeping upstairs).
The rain had cleared in the morning but it looked like more might come, so we decided to head off asap to attempt the Loop 2. It was drizzling when we left, but it was mostly dry through the walk. 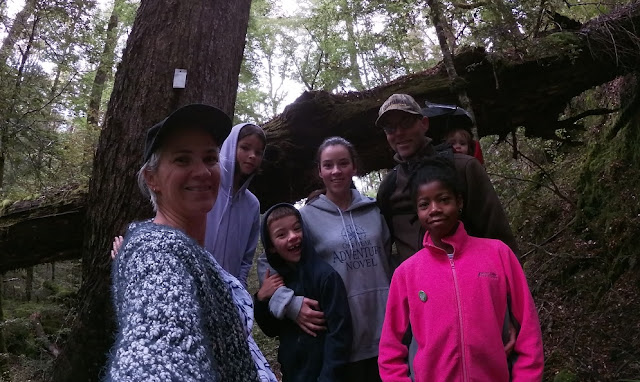 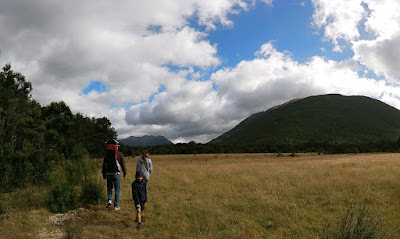 The Loop 2 is obviously used far less and was a lot more tricky for Brendon with the big backpack with Anastasia.
When we got to the grassland (that we remembered from the map) we didn't feel confident as to where the path went from there, so we ended up having to just forge our way through the last bit of forestry. We were all very relieved when we finally got to the road.
Loop 2 video.
It was such a lovely weekend. It was Brendon's birthday today, so it was a nicely timed weekend away to celebrate with him. His gift from us all (that the children contributed to) was a fitbit. We decided to give it to him on Friday though so that he could enjoy using it through the weekend.
Posted by Buckland at 10:00 PM