With almost 50 photos from the morning it was easier to just make a video with most of them. 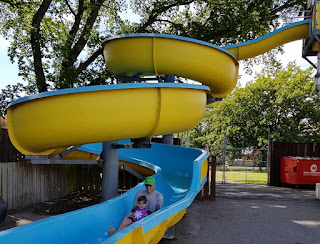 Then I can just pick a few to post.
Asher kept her dark goggles on the whole time and wonderfully she managed with all the swimming, sliding and bouncing. She just LOVED the water slide. 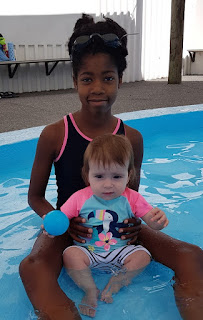 Ruth was a great help with Anastasia. 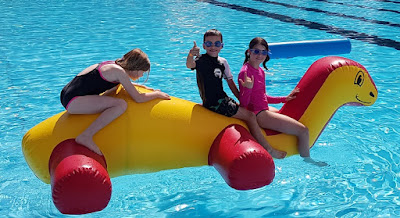 They had fun blow ups for the children to play on too. Just after this Hannah had a great idea and got that jumbo pool noodle (just behind them there) and used it as a paddle. 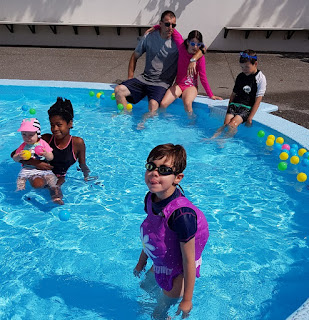 It was perfect for Asher that there were so many balls to play with in the toddler pool. 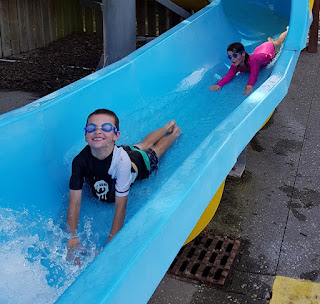 Hannah and Hezekiah just loved the slide too. This was free with the pool party entry today - so it was a real treat. 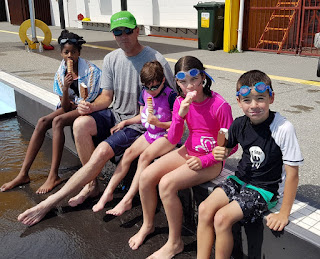 They had free snacks and cool-dink as well as free ice-creams. I think what we paid for the entry didn't even cover the cost of the ice creams. So it was worth the trip into town. 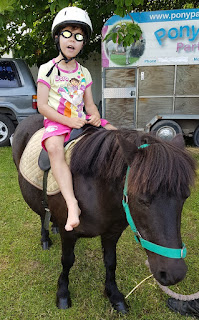 It was great to see the improvement Asher has made over the last year. A year ago she would not have even given the horse an extra look. Today she looked in it's eyes and wiped it and was very excited about getting up for a ride. 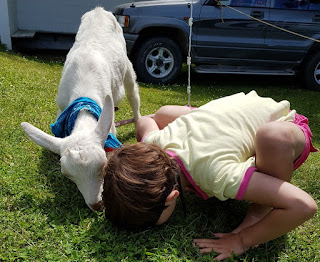 We laughed so hard though when she went to the goat. She looked in it's eyes (to say hello) and then after watching for a bit, went down and seemed to want to copy him eating the grass! And then she thought she could have a ride too - so we had to quickly stop her from climbing on his back (and the back of the calf). 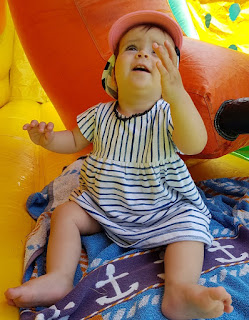 Anastasia really enjoyed the jumping castle. She did so well today with missing her nap. 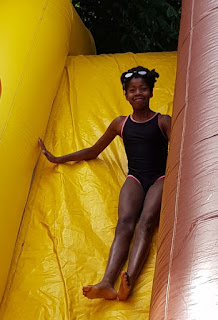 The older 3 also had fun on the huge jumping castle / slide. Hezekiah just managed to get a ride as they were starting to pack up when he finally decided he wanted a ride.
It was such a lovely outing. We were thankful to have Rachiel join us so that we had enough adults for the 3 little ones (Hezekiah still needs proper supervision).

Asher had a seizure this afternoon. We had stopped at a mall to have some food and she only had hot chips. So I started wondering if protein at lunch was something I need to start making sure she gets.
Writing this on 25 Jan I can note that she went 6 weeks after this before having another seizure (which was only 10 seconds and due to jumping on the trampoline). So she has been doing really well. She only had 2 seizures in December.
Posted by Buckland at 1:00 PM