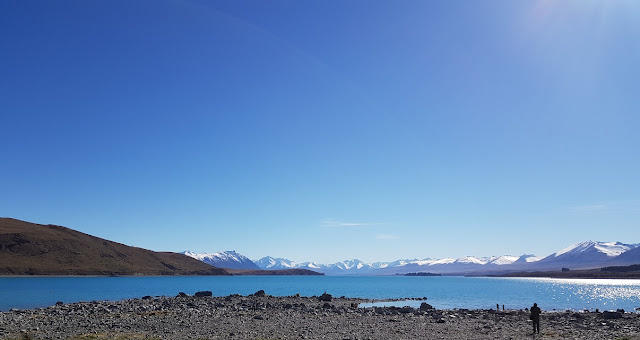 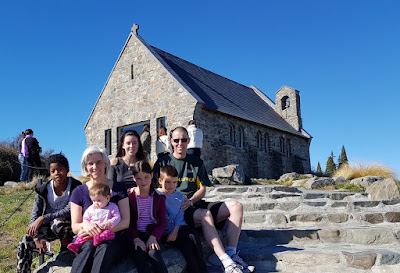 Saturday 15th: A fun filled but relaxing day today. It was nice to have ideas of what we wanted to do, but no actual plan that we had to stick to. The children would ask what was happening and I kept saying "there are no rules - lets just see what we want to do". It was a great mental break for me to not have anything planed or organised. Nothing needing to be done by a certain time, just enjoying every hour as it came.
Our casual start to the day led us to Lake Tekapo first. 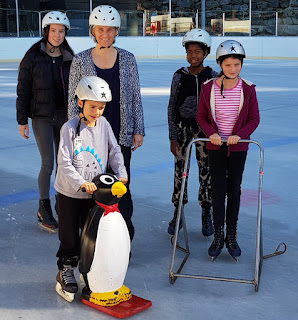 The last time we were here I was pregnant with Hezekiah. :-)
Then we headed to the ice rink that Ruth had found out about on-line. It opened at 10am, so we had the timing perfect.
We hired a penguin for Hezekiah and a frame for Hannah. Unfortunately Hezekiah got very stressed as he felt unsteady and worried about falling. So he got off the ice and we switched the penguin for another frame. 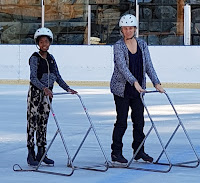 Hannah also felt very fearful, so she didn't stay on the ice long either. So Ruth and I ended up using the frames for a while. This was a great help to me as I could skate around quickly and get my own confidence back. 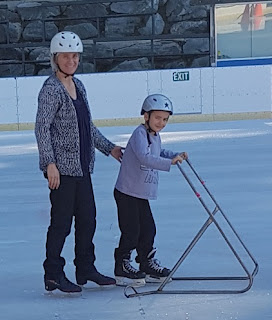 The last time we went ice skating (also over 7 years ago) I was very unsure on the ice and kept feeling like I was going to fall. I ended up staying at the side most of the time. Such a contrast to the confidence I had on the ice as a child. I remember skating rings around my Dad when he came. My older brother and I would often take a bus into town to go skating on a Saturday. Such lovely memories, but so sad when all the skill I had as a child was gone. So today restored some of that confidence. Having a quick skate around with the frame was an amazing help. Especially as I felt unsure as soon as I put the skates on. I started wondering why I was trying this, but it ended up so worth it.
I was very pleased when Hezekiah decided to have another go. This time with the frame. And having watched Ruth and I use them for a bit helped him to understand how much they helped. He did so well. 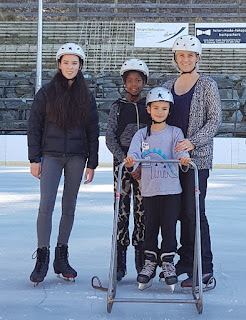 VIDEO: Ruth really enjoyed the freedom the frame gave as she could skate around quickly too. So we decided to have a race. :-)

LEFT: It ended up being the 4 of us on the ice this morning. We had loads of fun.


BELOW: Did I mention it's an outdoor ice rink? So it's only open till the end of September. We timed our holiday perfectly. It was such an amazing experience to be skating outside. The ice rink that I went to as a child was underground. So quite a contrast. :-) 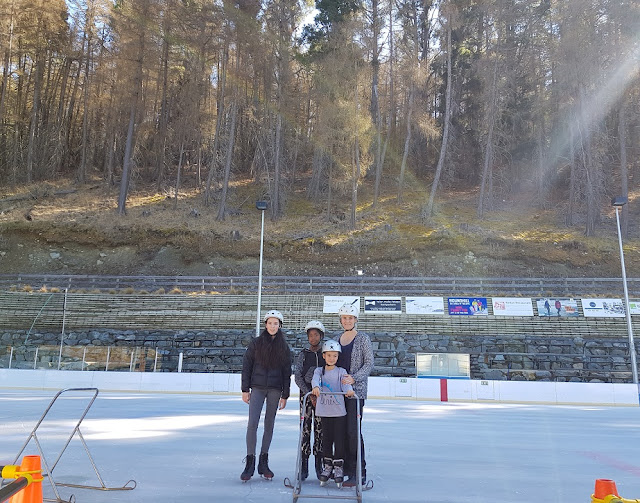 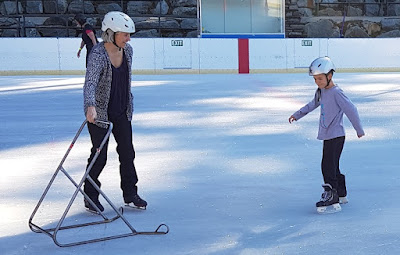 Hezekiah did so well that he even had a go without the frame. Great job Hezekiah. 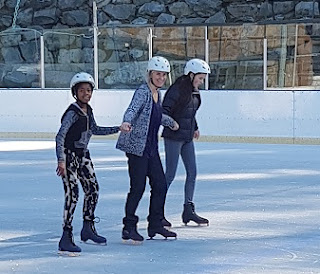 Rachel was disappointed that she didn't feel as confident as when she went with her friends earlier this year. We chatted about what might be different and she said perhaps it was that a few of them held hands and skated around together. I was a bit nervous as I wasn't sure my skating was good enough for that, but we decided to give it a try (and mentally risk a fall). We didn't fall though and it was good to get Rachel moving a bit more confidently on the ice. We think the distraction of friends chatting away was also a big help on her previous skate. 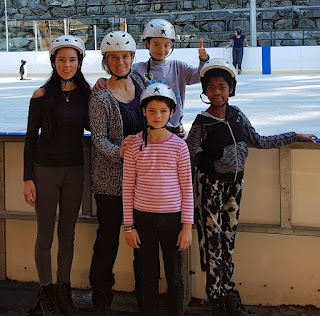 Thanks Dad for watching Anastasia so that we could enjoy this experience. Brendon isn't too keen on skating, so it worked out well that I could join the kids.

Hezekiah said he wants to take a photo with him holding the lake. :-) 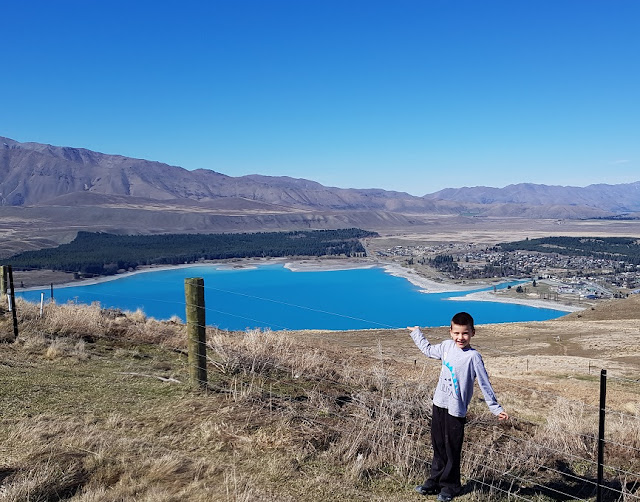 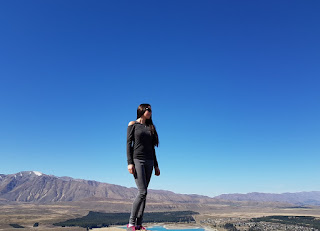 Rachel's idea of a photo from the very popular rock.

We had to wait in line for our turn to take photos. Thankfully there wasn't anyone waiting after us, so we could take quite a few. 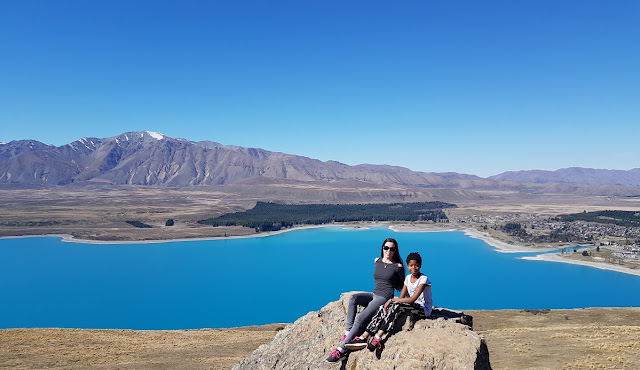 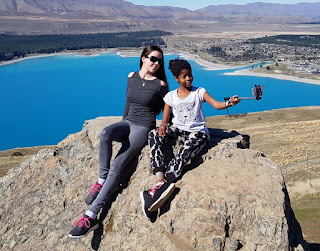 This time Ruth's suggestion of a photo - a photo of a photo being taken. :-) 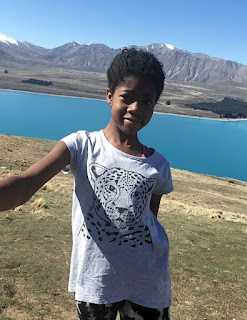 And then I will include some photos from Ruth too.


BELOW: She was the only one who took a photo of the top section of the lake. I really like this one with the reflection of the mountains in the water. 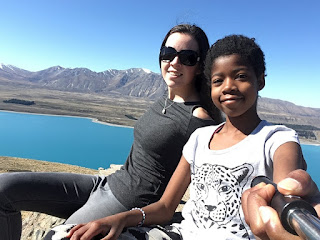 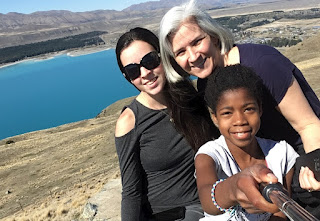 Hannah and Hezekiah didn't want to join in.

And after this photo I had to go and get some big splinters out of Hezekiah's hand. The had found a stick that he was having so much fun with, until he got injured. It was probably the worse splinters he has ever had. The staff at the tea rooms were really friendly and helpful though and got their first aid kit out. They didn't have a pin, but Rachel spotted a triangle bandage and told me that there would be safety pins in there. Which were instrumental in getting them out. 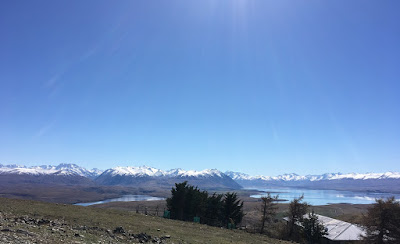 Another beautiful photo taken by Ruth.

BELOW: Another of Ruth's. She liked the spot this guy had chosen and it makes a great photo.