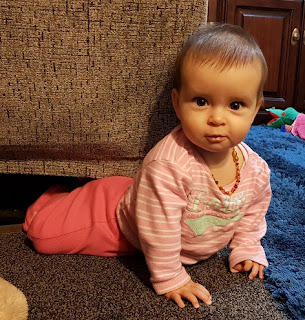 Wednesday 18th: Anastasia is really good at her backwards crawling. She often gets herself backed up against the furniture. Such a cutie. 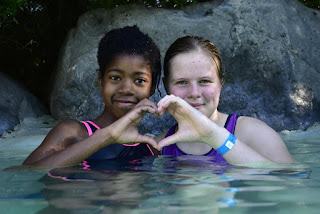 Ruth and her friend Rachael joined the HYP and other Year 7 and 8 students from the district for a trip to Hanmer Springs Hot pools. We only had to pay $5 for the transport. The children were told that if they wanted to go on the slide, they could pay for that themselves. Ruth had found a few extra jobs to earn the extra for the slide, so she was really pleased when they arrived and told them that they could all go on the slide for free. What an added bonus. Free entrance and free slide use. 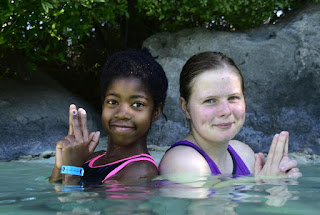 And then the professional photographer took photos of loads of them too and gave digital copies to HYP. So special to have some photos to remember the fun day. 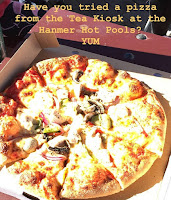 They even got 20 pizzas from the Kiosk at the Pools. What an added bonus. She ate her packed lunch for dinner when she got home. Pizza a much nicer lunch. :-) 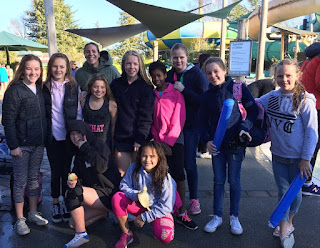 I took the girls to the bus in the morning and then they got dropped off in Culverden on the way back, where Rachael's mum works. Ruth was treated to an ice cream while her mum finished off work. So a day full of treats. 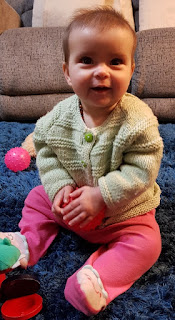 Thursday 19th: Sitting so beautifully. She has even worked out how to reach forward and get toys and still keep her balance. 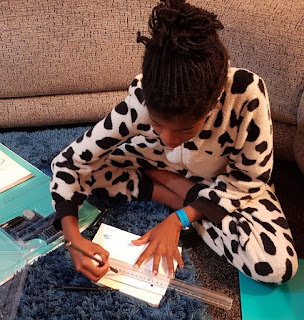 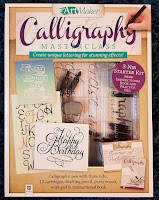 Ruth's birthday today. A big 12 year old already. She was very excited when she saw that we had bought her the Calligraphy book she had contemplated buying from the Scholastic Book Club. She has often been interested in learning Calligraphy, so she didn't take long to get started this morning. Even before she had breakfast. 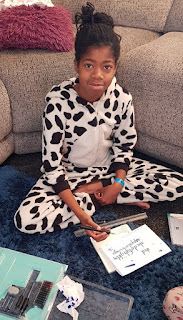 I know she is really going to enjoy this. She says she hopes it will help her general handwriting improve too. :-)

BELOW: I wanted to get a video of Anastasia's backwards crawl. Not the best video, but at least some bit of record of the fun we have had watching her develop her skills.
Those little hands just keep moving backwards. So sweet. 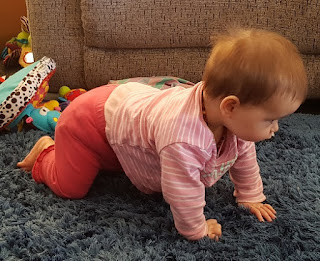 Friday 20th: No photo record, but this afternoon Ruth headed off with her friend Rachael to another HYP event - ice skating and a mall visit. The mall visit actually happened first and I only heard when Ruth got picked up that they were only going to be finished ice skating at 9:30pm. So I picked them up from the bus at 11pm. They had a great time and I was so pleased Ruth got to have 2 special days around her birthday.

Left: Anastasia in such a lovely crawling position. I'm sure it won't be long before she figures out how to move forward from here.

Anastasia was very motivated to get to the DVD player this afternoon, and managed to wiggle her way forward. Asher enjoyed all her wooden puzzles this afternoon. And she played with the abacus at the same time. Moving a little piece every time she put a puzzle piece in. 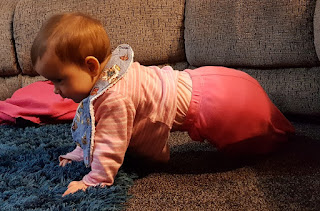 In her desire to work out how to move forward she even went up onto her toes a few times today. This was the best photo I could get of it. She would get her body really straight - a very good plank exercise - but just not achieving her desire result.

Rachel got back from a very successful CEF Camp this evening. She couldn't believe it when she saw Anastasia sitting so well. Before camp Anastasia had the ability to sit, but never bothered doing it for more than a few seconds and then would happily just roll back. So Rachel was so surprised when we just put her down in a sitting position and she happily played there for ages.
Posted by Buckland at 10:00 PM