A very up and down week for Asher

Saturday 17th: Rachel was excited about going for a job interview of sorts at the Nor'Wester Cafe in Amberley today. It was perhaps more for her to see if she would want to work there. She spent two hours over lunch doing a whole range of tasks. She will start working there next Saturday. 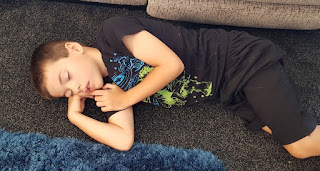 Hezekiah had a runny nose when he came home from school yesterday and when he woke this morning he had a fever and just slept the day away. He likes to be around people, and so just moved around the lounge (on and off different chairs through the day). He didn't even have the runny nose today. He did vomit in the evening and again during the night. So Anastasia and I stayed home with him on Sunday and he missed school on Monday to make sure he had the 48 hours clear. 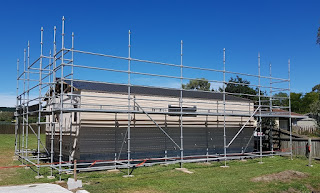 On reflection (a week later) I think the vomiting may well have been because of not eating the whole of Saturday (as this has happened to him before) rather than a tummy bug. No one else vomited and for this I was extremely grateful.

RIGHT: The roof and walls went on to the cottage next door very quickly. It's a metal exterior and that made it very quick to get done.

Sunday 18th: Ruth went to a Kiwi Watch overnight. They hike up to a camp site and change bait in traps every 100m on their long hike. The traps are for the Kiwi predators (thus the name). She was exhausted when she got home and also struggling with a cold. So she stayed home from school on Monday too.
Hezekiah had a relaxed day on Sunday (staying in his pjs the whole day) but already felt much better. 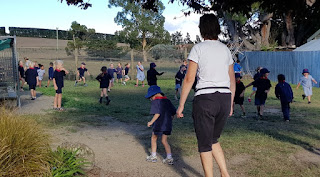 Monday 19th: School visit for Asher today. She didn't have Hezekiah there to draw her into the game, but at least she went out there with the other children around. 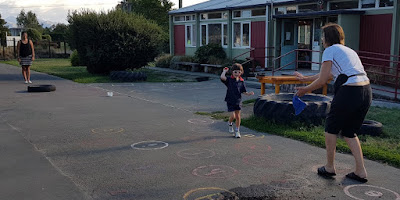 She loved playing with balls again. There were plastic ones as well as tennis balls. She sorted them by throwing all the tennis balls to Rachiel (her Teacher aide) and the plastic ones to Harriet (her Special education teacher who was here to visit with her for a bit this morning). I headed to the office to drop medication off and when I got back the game was still going. 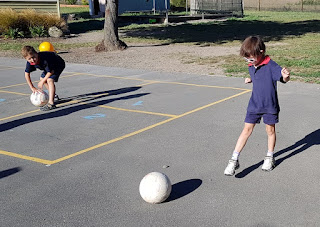 So I asked her teacher if there were any bigger balls for kicking. She found a couple and I helped move Asher onto a new game. Rachiel had experience from this at preschool and told Harriet to just leave the balls where she threw them (to be collected later). Asher then started wanting to pick the bigger balls up to throw. She did that a couple of times but then Rachiel took her leg and helped her kick it. I had also asked Jens to kick with her - so with both demonstration and physical help, she got directed and then enjoyed kicking. I'm so thankful for how well Rachiel knows Asher as this makes it so much easier to direct her. 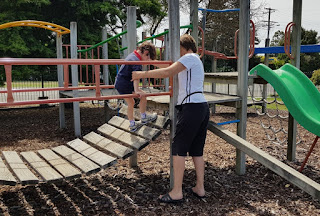 She stayed a bit later today (till 1pm rather than 12:30) and so she was enjoying a play at lunch time with Rachiel when I arrived. At 12:30 she had asked for me and went to get in her buggy. This may have been her "clock" set from the previous 12:30 visits, or the fact that Rachiel went for a break and she didn't know the other teacher aide as well (or a combination of both). At least she has the buggy there to be in when she needs to feel safe. And as soon as Rachiel was back she was out and playing. So great steps forward. 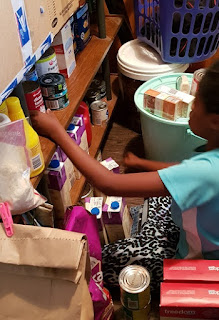 Ruth decided she wanted to sort out my pantry this evening.

Thanks for sorting Ruth - I love having things a bit more organized and just haven't gotten the time to do it myself.

It's fun to see more and more areas where Ruth is very similar to me.

She benefitted from the day home resting, but is already feeling much better and will be back to school in the morning. 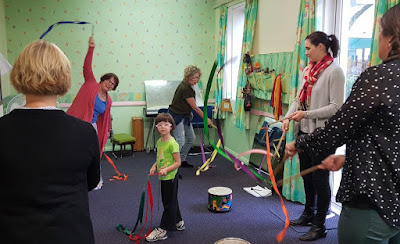 Tuesday 20th: There was so much planned for this Tuesday that I was really glad Asher was still well. It is her last day at Champion Centre and she also had 4 ladies visiting. From school she had the 2nd Learning Assistant (so that Rachiel is able to have breaks in the day) as well as Harriet (Learning Support Teacher - who will see Asher once a week and draw up her weekly plans). And from the Ministry of Education she had her Speech Therapist and OT. 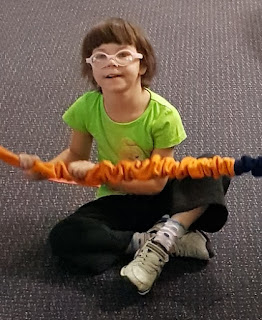 It was lovely for me to meet the MOE ladies and for them all to get to watch Asher and see how much she is capable of. The music session was especially eye opening for me. I was confident that Asher would not be upset by having the extra ladies around (and she wasn't). They had asked Lynda if she was ok with them joining in her music session. She said yes, as long as they joined in. ;-) After some of her routine games (like ribbons pictured) we got the teddy bears down and first did her favourite song. Then Lynda introduced 2 new songs. I was amazed to watch Asher. She looked around the circle at the different ladies doing the actions and then started doing some of the actions herself. She did just a couple of actions on the first new song, but on the 2nd one, she did them all. Normally she would just try and get away from new things (or just ignore the new song). So this was really amazing to watch. Modelling is very clearly going to be a huge key in getting Asher to learn new things. 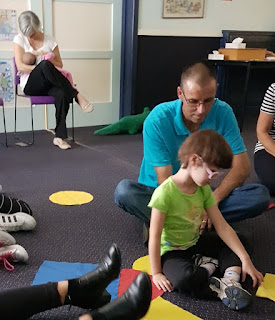 There were a number of things that happened at each session that gave us things to chat about and helped the ladies learn more about Asher. It was such a productive morning.
Asher enjoyed the rainbow ring during group music (another of her favourites) and then even allowed Dad to massage her during the last massage song. To think how far she has come. Last year she just wanted to run every time this song came on. Slowly she learnt to just sit through it and eventually allowed a little bit of touching. So it was special to see her getting a nice massage from Dad.
Thanks to Sarah for taking photos for me while I was feeding Anastasia.
And thanks to Brendon for taking the day off to join us. It made it so much easier for me as other than when Anastasia was feeding, he looked after her so that I could focus on Asher and the guests. 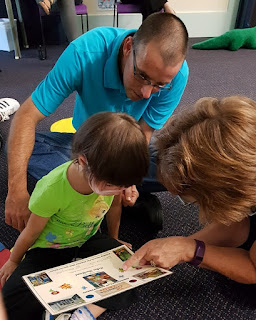 Asher got her certificate from Champion Centre and they sang "Happy School Days" to her.
Once the sessions where over I got to spend a bit more time chatting through things with a few of the therapists and her guests. It was good to have a quick brain storming session and also get to answer questions and allow the guests to understand a bit more about Asher and how she learns and the progress she has made over the last year.
Originally Asher had a hospital appointment for this afternoon (and that was the main reason Brendon had taken the day off), but as we had seen the doc during her hospital stay last week, he was happy to cancel he appointment and have a check up again in a months time. 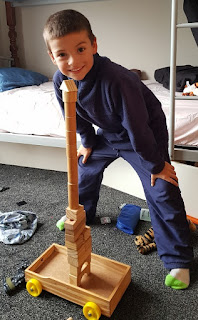 Hezekiah enjoyed making a huge tower this afternoon and asked that I come and take a photo of it. Great job Hezekiah.
A local bible study used to be every 2nd Wednesday but has now been moved to Tuesday and so we went as a family for the first time this evening. We had a shared dinner and then the study. During dinner Hezekiah and Jens had a great time playing. Such cool masks. 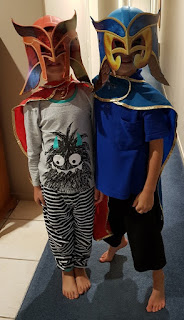 Thankfully it went really well with Asher and so it looks like we will be able to attend together more often.
St John Youth was cancelled today due to the potentially bad weather with cyclone Gita arriving, so it was nice to have her join us this evening too. Although there was a lot of rain through the day and we felt it was safer for Rachel not to drive this evening, it thankfully was not too bad in our area. We have had storms that were a lot worse. Other parts of the country didn't fair as well, so it was still a big event for the country.
Wednesday 21st: Asher was due to have a school visit today but had a seizure at 7:40am. When she woke after her sleep she seemed ok, so I took her to school (although a little late). She was not very happy and within half an hour of me being home they called me to pick her up. We didn't know if she would settle, so it was worth trying.
She looked like she was perhaps starting with a cold (although the runny nose may have been because of her crying) and so it was good for her to be home. She just got worse through the morning and was eventually having so much neurological activity that I was relieved when just after 1pm she had another seizure. 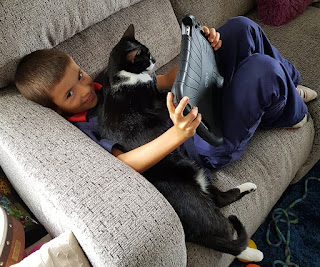 She actually had a sleep late morning (which she never does) and when she woke she had pain on her face and big jerks which just kept going on. Thankfully after the seizure she was able to sleep well. She ended up sleeping most of the afternoon and developed a fever through the afternoon too. She didn't eat at all through the day, so a very similar day to what Hezekiah had on Saturday. She had another seizure at 8:40pm but thankfully had a restful night after that.

LEFT: I just love how Anakin lies on people. He is too big to just fit on a lap, but that doesn't stop him. So cute.

Thursday 22nd: Asher was due to have another school visit today but she still had a fever when she woke. She ended up sleeping almost the entire day.
Her new drug arrived yesterday and although it's not ideal to start with her feeling unwell, we also want to get more seizure control. So we started that this morning. It's an addition medication rather than replacing the one she is already on. 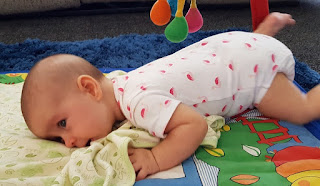 The research indicates that the help that it may give is to get her other medication working more effectively. We know the drug she is on helps a lot - so if we can get it working even better - that would be an answer to prayers.
Rachiel popped in for a visit this morning. While she was here Anastasia rolled over on her own for the first time. She did it a couple more times through the day and so I took this photo to remember it. 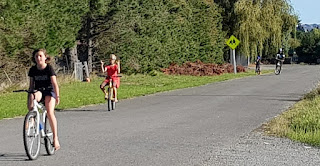 Fun with the neighbours on their bikes this afternoon / evening. This photo was taken at 6:10pm. It's nice that they can enjoy the sun as it won't be too long and the days are going to start getting shorter.
Posted by Buckland at 10:00 PM