My week of waiting

Monday 6th: Brendon got some work done this morning and then at 10 we headed to the hospital for our 12 o'clock appointment. The plan for today was to do an ECV (to turn her from breech to head down) and then induce labour. There were a few emergencies, and so we finally saw the consultant at around 2. (I was slightly intimidated when he first walked in, but his lovely West Indies accent and his kindness soon had me very relaxed with him.) To everyone's surprise, she was already head down. At first they suggested that I just head home, but the suggestion made me very emotional. The consultant was very caring and we spent some time chatting about things. The complex situation at home with Asher was a big part of it, as well as the distance we have to get to the hospital. It takes a good hour and a half to get in.
They had a few discussions and eventually the decision was made to induce now, while she is head down. They don't do things too quickly, to keep things as safe as possible, so to start with they use a balloon catheter to help open the cervix. It's much more gentle than hormones, which they felt might be too stronge as I have had a few births before. The plan is to leave that in for 24 hours and then re-assess. Unless the cervix opens really well and it falls out before then.

Tuesday 7th: That was done at about 5 pm on Monday, and we just stayed in the birthing suit as they were not too busy. I had a number of strong contractions overnight but at 5 am I went to the toilet and the contractions all stopped. By mid morning we had moved up to the maternity ward to wait. At about midday a different consultant came to check up on me, and to our great disappointment, we found she was breech again. So the induction was immediately stopped (and the balloon removed). They are happy to deliver a breech baby if labour happens naturally, but they will not induce a breech.

With her moving so much, she is now seen as an unstable lie. If she is in the middle of one of her turns and the waters break, it could be an emergency situation. So I just need to stay put. A similar thing happened when Asher was around 38 weeks. She was in an unstable position and so I spent the weekend in hospital. Thankfully with her, she got head down by Friday evening and stayed that way the whole weekend, so I was able to head home on the Monday. She ended up staying in for another 4 weeks (and staying head down the whole time). Something I could not even imagine this time as I have been so very tired.

There were a lot of raw emotions on Monday afternoon as I was the one not wanting to just head home to wait. I had a good long discussion with my midwife on Monday afternoon, with lots of tears and uncertainty. She encouraged me to trust my instincts and then not have any regret. By Tuesday afternoon, I had the assurance that I had made the right decision. If I had gone home on Monday, I would have seen my midwife for my appointment on Tuesday afternoon, only to discover that she was breech again and I would have ended up in hospital anyway. The Lord had given me peace, and now this extra assurance that the right decision had been made.
So Brendon headed home and I got settled. 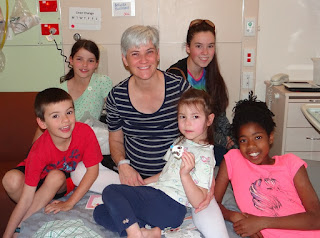 As we didn't know how long my stay would be, Brendon got the kids fed after school and they headed in for a visit. It was nice for them to get to see where I am. It helps them feel more relaxed about it all. I also needed some more tops for the unknown days ahead, so they could bring those in for me too (as well as some frozen cheesecake slices I had at home - my evening protein rich snack that has helped with nausea the last few weeks).

Wednesday 8th: She was still breech this morning. The proposed plan was to check dilation this afternoon and if dilated enough, do ECV and break waters (the plan we had in place for Monday). They got too busy though, and so I just had the day to relax.

It was a God ordained afternoon for me though as my room mate went into labour. Her husband had only finished his shift at 9am, so he had gone home to get some sleep. Long story short: I got to be her support person for 45 minutes, and she was so appreciative of the help and tips I could give her and her husband when he arrived (as intense contractions hit quite suddenly.) Later that afternoon he popped in to again share his thanks and let me know baby had been born (and I got to visit them each day till they were discharged on Saturday.)

Thursday 9th: The consultant came around this morning and felt that baby was head down again. She checked and felt I was dilated enough to break waters. So once there is space in the birthing suit they will get me down there. So I packed everything up and as soon as they moved me down, Brendon started heading in. By 11 they had scanned to confirm that her head was down. I had a line in for hormones so that they can get contractions going as soon as the waters are broken. That way the contractions help hold her down. Brendon was about half an hour away and they said they could wait, but I was happy for them to start. Unfortunately her head was too high, and there wasn't a nice little pocket of fluid above her head, so they were not able to break the waters. They suggested I walk around a bit and try get her lower. After about 2 hours I asked them to check, and as I suspected, she had moved into a transverse position. Another consultant was called to discuss options and the suggestion was that it would be safer to wait. If we tried to move her and break, she may just flip out again and then we could have a potential emergency.

So I headed back to the ward and Brendon headed home. Again. Thankfully we were able to organise a lift to dancing for  Ruth and Hannah, and because Brendon was home, Rachel drove herself to her lesson. I was also really thankful today for the Lords provision of someone to watch Asher this morning, so that Rachel could get to work. She has had to watch Asher so much this week, and I was pleased she didn't have to miss out on earning some money.

Friday 10th:  Thankfully she felt head down by Thursday night and she seemed to stay head down through the day on Friday. I am so very thankful to be in a country where they are not in a rush, and want to encourage natural birth as much as possible.

When I had the CTG on Friday evening it picked up that I was having very strong tightenings  every 10 minutes. It made them a bit nervous on the ward, as they really didn't want me going into labour with her unstable, so I headed down to the birthing floor to play it safe. They did a scan and confirmed that she was head down, and kept me there for the night. In the mornings hey did a quick scan again and although head down, she was higher. An hour or so later the consultant came to chat about things (she was wondering again about possibly checking if we could break waters) and on checking she was totally transverse again (after almost two days of staying head down.)  So all proposed plans where again out the window and as the tightenings had calmed down, I went back to the ward. Now into my third room. :-)

Saturday 11th: After lunch Brendon brought the children for a visit. I had spoken to them on the phone in the morning and Hezekiah had said he was looking forward to visiting again. I suggested to Brendon that he take them to the museum after the visit and when Hannah heard that she was bouncing all the walls in excitement. She does love going to the museum.

They had a nice visit here and then thankfully had a decent time at the meuseum before Asher had a seizure at 4pm. She had one on Friday around midday, but that has been the only two this week. So I'm really grateful she has had a good week.

Sunday 12th: I had a nice quiet and restful sleep on Saturday night and then just focused on using my time here to continue to relax and recharge. Other than Monday and Friday nights, I have been sleeping so very well, and it has done me the world of good. This week has helped my body to recover from the strain it's been under the last couple of months. My "forced holiday" (as I call it) has clearly been a part of God's perfect plan for me. He knew what I needed before having this baby. I am so thankful I can so fully trust Him through this time.

Seven years ago I had a friend spend many months in hospital (her waters broke before 20 weeks). I clearly remember our conversation about not knowing who God had planned for her to meet during those months. And so I had the same view of my unknown-length hospital stay. Our Pastor calls them "Divine Appointments" and I enjoyed so many of them. I am so thankful to serve such a loving God, who is my Father and cares for me and every detail of my life. I am thankful that He is in control of all things and I really can trust fully in Him.

Rom 8:28 "And we know that God causes all things to work together for good, to those who love God, to those who are called according to His purpose."
Posted by Buckland at 10:00 PM