Athletics, breech and a nasty bump 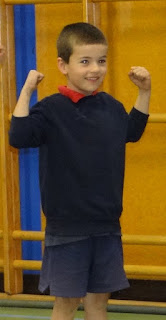 Friday 27th: It was nice to have Brendon join us at assembly today. Hezekiah's class had their faces painted like Tigers but he didn't want his face painted (or said he wasn't allowed - either way I understood his choice). 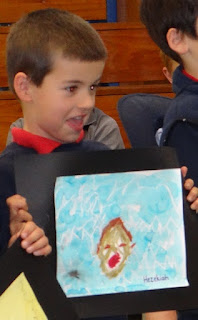 They sang "Eye of a Tiger" and it was a lot of fun watching him do the actions with such enthusiasm.
When I first spotted him I could see that he was very tired. I heard later that he didn't sleep much at the friend's house. He was too excited to get to bed early or to stay in bed very late in the morning. So I was pleased he found some energy for the song. :-)
The class also showed some of their artwork. They did self portraits. So perhaps that's why he had his mouth open for the photo. ;-) 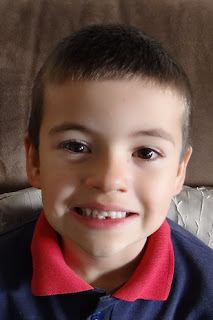 At school today his first wiggly tooth came out. I had seen it was getting nice and loose this week and was pleased that it fell out while he was eating his apple for lunch and he didn't even notice. Hannah has struggled with so much pain with her wiggly teeth lately, so I was pleased it was an easy one for him. 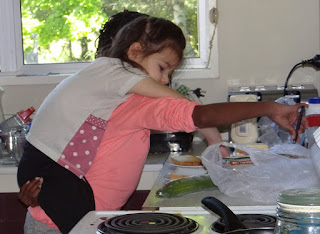 Saturday 28th: This morning Rachel headed off to the Sampson's house to spend the afternoon there before a number of them head off to the Home School Formal this evening. I'll have to get some photos loaded at a later point.

I love this photo of Ruth making lunch with Asher on her back (trying to help). 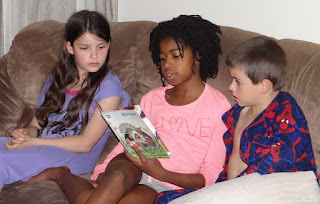 With Aeleen helping a few times in the evening with getting Asher ready for bed, it's helped get the others ready a bit earlier too. So there has been more time available for evening bible stories. Ruth took on the role of reading this evening. :-) 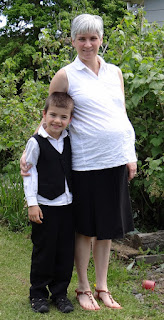 Sunday 29th: Only when we left church did I realize that Hezekiah and I matched today. So it was a good excuse to get a photo when we got home. I haven't got many photos of my "bump" in this pregnancy. I am starting to outgrow most of my tops though. They are almost all looking just as stretched as this one. ;-) 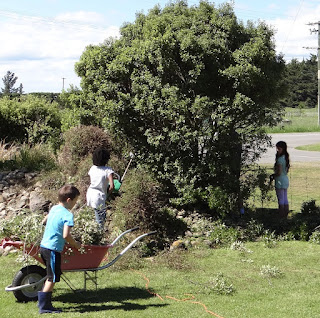 Brendon and the middle three got stuck into this front area today. Ruth did a great job of trimming back the three funny bush things that grow very quickly (and can look really messy). Hezekiah had actually been asking when the rocks would be put back, but he ended up not being able to help too much with that. So he was the branch collector and Hannah and Ruth worked on the rocks. The trees were also getting a bit overgrown, so we decided to rather cut them back and keep them small enough to maintain ourselves.

Monday 30th: The kids had moved the rocks off the next section yesterday, and this afternoon Hannah decided to pull the long grass out of the section to make it look neater. I thought it was a good time to get a big picture of the final result of all their work. Rachel even helped by clearing the last of the branches today that didn't get finished up yesterday (she was only back at 7:30pm last night). She had another safe, long solo trip. So that was good. She is just rather frustrated with her phone as the GPS / Map does not work well at all. So she has to start looking at getting a good quality phone.
Tuesday 31st: I have loads of athletics photos from Wednesday, so I will just add captions on those and write about all the events of Tuesday (where there are no photos).After Champion Centre we headed to my midwife appointment again. Brendon met us there after his training and I was especially glad that he had this week.
My midwife was concerned that baby was breech. So Brendon was able to take Asher home and I headed back into town for a scan. Confirming that baby is indeed breech. Thankfully she is not in an "unstable lie" as that could have meant me heading straight to the hospital. It was all very emotional for me. If I got into labour with baby breech, I have to go straight to Christchurch Women's Hospital.
It was hard to adjust my thinking, having pictured myself in labour at the Rangiora Health Hub, and now to think about labouring in a place I have never seen before. The emotions were all just very raw. We had been thinking of taking the children to the "Light Festival" in Amberley, and so I asked Brendon if he would take the children so that I could just get some time at home on my own. I needed space to let all this new information start to settle.
﻿ And I was honestly just exhausted from a very long day. Unfortunately no photos were taken. Hannah looked beautiful in a long green dress with her hair done up so beautifully. When I got home and saw her I thought immediately of "Princess Leah". She looked lovely. I was sorry to have not taken a photo straight away.
It was rather busy for Brendon as Asher just headed straight to the Jumping Castle when they arrived. Hezekiah had a fun time within the limits that Brendon set for him (so that he knew were to find him). Unfortunately Asher's jumping ended as it has the last few times she has been on a trampoline or jumping castle - with a seizure. Brendon said she had so much fun before though. So although we have been avoiding it for so long, he didn't regret allowing her to have all the fun she had. And it does confirm that it's still an issue for her. Thankfully it was short, but it also then cut short the evening for the rest of the children. Hannah had been waiting in a very long queue and so ended up not getting to do anything as they had to leave well before her turn.﻿﻿
Wednesday 1st: Great to get the children photo taken this morning. Rachel happened to be wearing her blue top and so I specifically put a blue one on Asher. The children's school "house" is blue, so they are allowed to where their house colours for Athletics.
It was nice to get to chat to some of the mothers when I arrived at the athletics and we waited for the sprints to get started. I was still very emotional about the likely hospital birth and all the unknowns around it. So it was nice to chat to them and let some tears flow. At that point I thought it would be a good idea to organize to go and see the birthing units at the hospital, and even making that plan helped me to feel a little less fearful about this big unknown ahead. 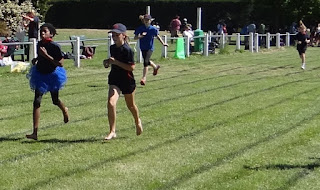 It was hard to try and get to see everything the 3 were doing as the field events continued while the sprints were going on. So I missed Hezekiah's ball throw and Hannah's shot put. At least I got some photos of each of them.
Ruth did the 1,200m again this year. There was a nice group of girls with her this year. They all did so well and put so much effort into it. 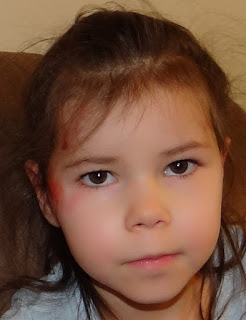 Just minutes before I was going to leave to fetch Asher from preschool, I got a call saying she was having a seizure. They warned me that she had fallen and had a nasty bump and graze on her head. I'm glad they had warned me as it looked really nasty. It's hard to even capture on camera how banged up she was. She had been hot and bothered and kept running to the gate asking for me (for 1/2 an hour before home time). This last time she just went too fast and fell. She landed so hard and the bump caused the seizure. With Dravet Syndrome the children are often unstable on their legs. Asher is not too bad, but her OT and us as parents often wonder how she doesn't fall more often. She had a big swollen area on her temple with the big graze. I tried to take a photo from the front to show the swelling - but by this evening when I took the photo it was already looking so much better. Thankfully she had a ice pack on it for a few minutes straight after the fall - so I'm sure that helped.
Posted by Buckland at 10:00 PM