Beauty, ballet and a birthday 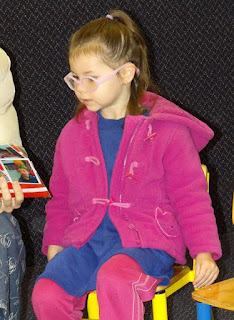 Tuesday 6th: At 6am Asher had a 1 minute Tonic Clonic. Always an unpleasant way to start the day. Thankfully she could still it off and still be up by 7 (her normal time). 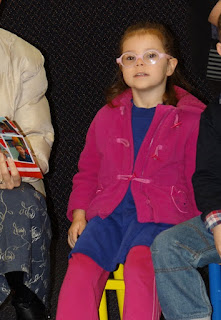 It was a teacher only day at school today. When Ruth saw that it was going to be on a Tuesday, she asked that she could come with to the Champion Center. So she took some photos during group session at the start of the day. She is doing so very well.
Wednesday 7th: We often enjoy the beautiful colours in the morning. I took this photo this morning as it was just stunning. 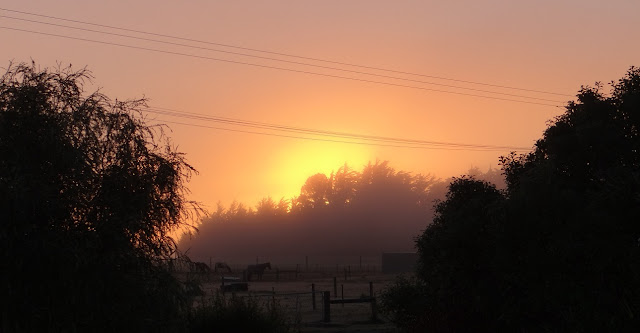 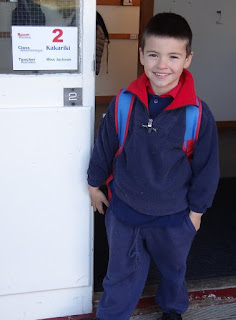 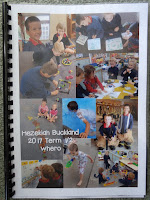 Hezekiah had his first day in the Year 2 class today. I took a photo outside the Year 1 class when he started, so I thought this would be a nice photo to take of the change.

His year 1 teacher made a lovely book for him of some of his work over the last 6 months. Some very special photos on the front too. 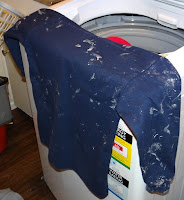 He came home full of paper mache. He was not very happy that a boy had been flicking his hands off - onto Hezekiah - the whole time. Thankfully he got used to it and it washed out ok. I just ended up having to wash his top each day this week. Thankfully he does have two. He has adjusted really quickly to the new class and I know he will be very happy and do well. 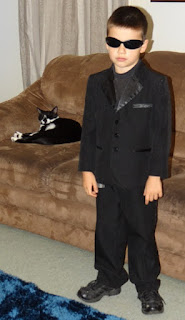 Thursday 8th: Asher woke me again with a 1 minute Tonic Clonic at 6am. She then had another 1 minute Tonic Clonic at 3pm. It wasn't nice to have 3 seizures this week. I had gotten really spoilt with her nice 10 day breaks that she had over the last months.
There was a mufti day at school today, the funds raised for the Wetspac chopper. The theme was Wacky or Movie character. So Hezekiah went as Neo again. This time he even had some black glasses. He also said he needed a black shirt and not his white one. Not many children now about the Matrix though, so most just thought he was on of the "Men in Black". He posed for me and had a nice serious face. Quite a hard job for him. 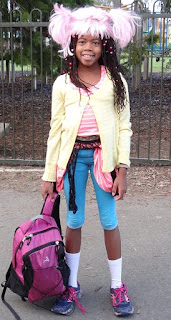 Ruth went with Wacky and just threw a whole lot of things together. I manged to find the tool we were given that helps you put beads on. So we quickly got a load of pink beads in her hair too.
Friday 9th: I called Asher's dietician this morning as Asher has not been enjoying her food lately and I have been a bit unsure of what to do. I have also been feeling very pressured with a load of things happening and so the dietician suggested changing to a Modified Ketogenic diet, to try take some of the pressure off. So we got started on that today. The main change is that she will not really be limited on her protein intake, although her carb intake will drop (because the protein is up). Eventually we will only need to weigh the carb items and be able to make sure she is getting enough fat in with each meal by knowing teaspoons or tablespoons (not having to weight to 0.1g for everything). I was so pleased that this change could be made immediately as it has already taken a lot of pressure off. I was due to make quiches again for her today, and I am honestly relieved that I don't need to. It involved measuring each item for each mini quiche (24 quiches x 5 items) and if Asher was still loving them as much as when I first made them, then I wouldn't mind. It's hard however to put all that effort in and then still have to try and convince her to eat it. 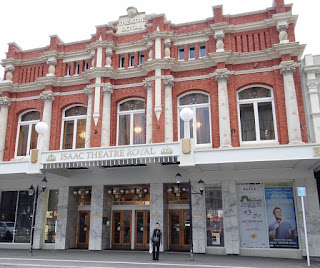 Saturday 10th: Rachel, Hannah and I left early this morning to get Rachel to the Isaac Theater Royal for a ballet lesson with one of the professional ballerinas. What a treat. She had a great time. No photos from inside though, as she was just too busy. No parents or even teachers were allowed in - only ballerinas. So Hannah and I kept ourselves busy while she was having the lesson. 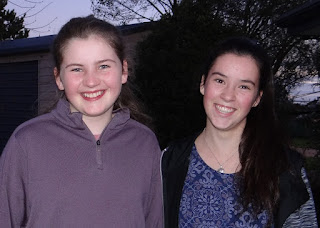 Then we got some lunch and headed out to the Sampson's house for Susanna's 13th birthday party. We were so very thankful to be included in this special day. And what a special way of celebrating the special 13th birthday. Only ladies invited to share encouragement and advice. Her older 5 brothers were the "Men in Black" who served and also shared encouragement. 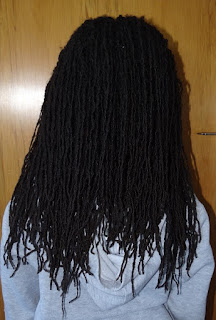 Sunday 11th: I suggested we make sure we get a photo of how long Ruth's hair is at the moment. We have now re-done almost 100 of the braids (there are 260). They are quite a bit shorter once they have been un-done and re-braided. So her hair will be a lot shorter by the end of the year - as our plan is to have it done by then (Lord willing). At this stage we have started working specifically on the bottom (so there is already a section that looks a bit shorter) and then the sides (to help it look neater).
Posted by Buckland at 10:00 PM