Fun on the tramp and tramping fun 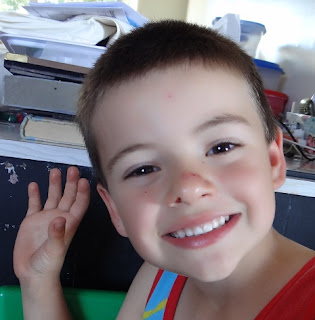 Wednesday 15th: Hezekiah had an accident at school today and got a nasty bump on his nose.
He was very brave about it all.
Saturday 18th: An early start for Ruth today as she headed off on the Kiwi Watch with some children from school. 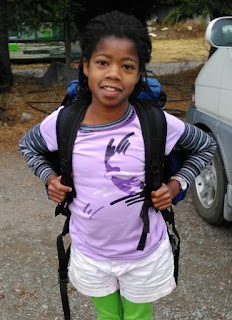 Her best friend was also going, and her mother was going too and taking their car. So Ruth drove with them. Around a 1 1/2 hour trip to where they park. And then a good hike up to the campsite. The friend's mother was also a great help in sorting all of Ruth's food. She is very experienced in tramping (hiking in NZ) and so she said she had enough to bring extra for Ruth. That took a load off my shoulders as we only heard about this trip during the week (while I was in hospital with Asher). 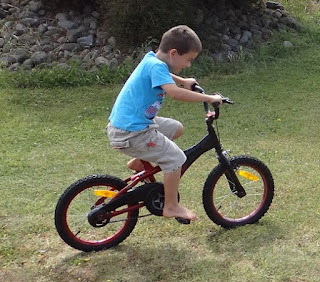 I bought a 2nd hand bike for Hezekiah last week before heading to hospital. The person selling it works on the farm, but Brendon kept forgetting to pick it up. So he finally brought it home today. I am so glad he had forgotten through the week, as I got to experience the joy of watching Hezekiah riding on his own for the first time. (It doesn't really count when Brendon had to help him get started and be right beside him the whole time). The previous bike was just a tiny bit too big, and now we realise the back wheel was also really stuck. Hezekiah is finding it SO much easier on this "new" bike. 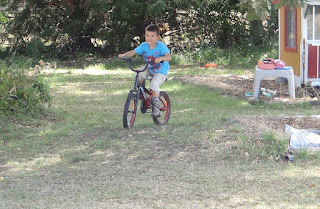 He called me to watch him going over the bump. Extra work having to go up a little hill. Good job Hezekiah. 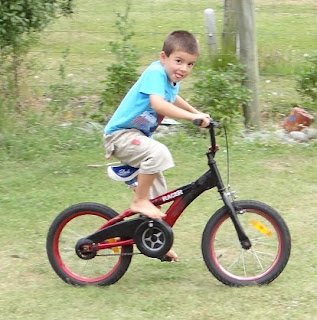 And then I had to come and watch, as he had learnt how to stand while riding. Such a clever boy. 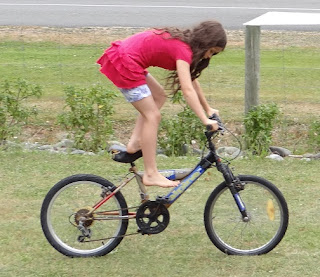 Hannah then showed me how she stands on her bike. :-) Thankfully Hezekiah knows he has to get a lot stronger and more balanced before he can give that a try. ;-)

In the afternoon Brooke and Logan came over for a visit. Logan used Hezekiah's old bike and Brooke borrowed Ruth's. It was so wonderful for me to see Hezekiah being able to join them with their bike games around the garden. Previously he always ran along. Now he is fully a part of it all. It was so special to watch.

And they got a restaurant game going again. Rose Cottage gets it's most use when they are here. It's always so much fun for me to watch. :-)
The "table" and chairs to the right. They were all busy on the chalkboard, writing up the menu (I think it was). 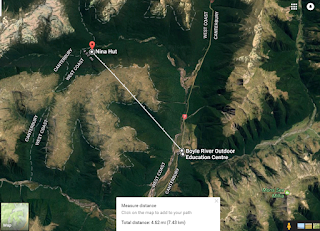 Sunday 19th: Church, lunch and then I headed off to pick Ruth up. It was lovely hearing all about their overnight adventures. They had a long hike of at least 7km to their campsite, checking and re-bating traps every 100m. The Mum was telling me how it is a bit daunting when you start and there are 72 still to go. It is a help on the way back though, as the countdown to being back at the start is on. Ruth and her friend were really quick on the return journey because of this. She said Ruth is a really good walker. They did around 15km over the two days - so well done Ruth. They didn't get to see any Kiwi, but she did have a great time. 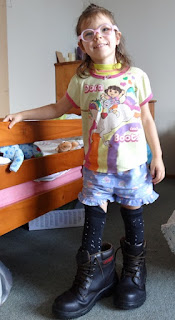 Asher always enjoys putting socks and shoes on - especially if they belong to someone else. :-) 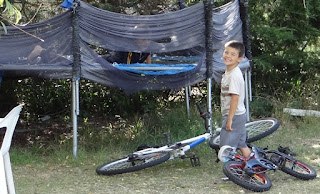 Hezekiah was so pleased when Brooke and Logan came over for a visit again this evening. This time they brought their own bikes. 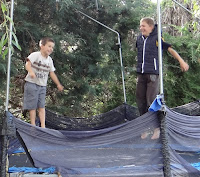 Some mid are photos.
So much fun. 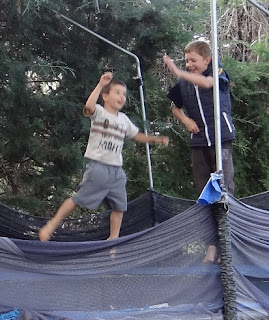 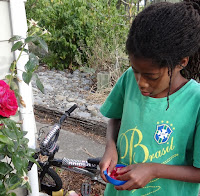 Ruth and Brooke had some interesting cooking game going on. Here she is creating something with flower petals.

I think I get as much enjoyment from watching them as Hezekiah does from having Logan over to play. 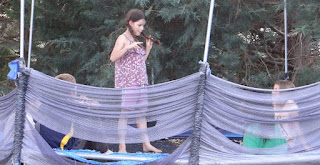 And then all 5 of them on the tramp playing a game to end of the evening.
Funny how a trampoline is called a tramp and if you go hiking you are tramping. I am sure most of you (non Kiwis) are used to me using tramp for trampoline, so tramping is your new word for this post. :-) 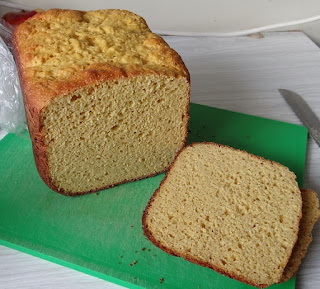 With Ruth back on the FAILSAFE diet, I had to think of a bread option for her without the rice flour (she reacted to a rice trial last time, so we want to just make sure and be really strict to start with). I first tried oat flour, but it didn't work well at all. Last weekend I made her a small loaf with chickpea flour (that I quickly made from chickpeas I had). Just switching the rice flour to chickpea flour in our daily recipe. It worked really well although looked a bit dark as it was half the amount but the same cooking time as a full. So today I made a full loaf. It looked really good and Ruth said it tasted good. The only problem was that it doesn't last as long as when it's a bit over cooked. And it doesn't freeze well. So although it looked great - we will be doing the smaller loaves in the future.
Posted by Buckland at 10:00 PM