A splinter, some testing and a migraine 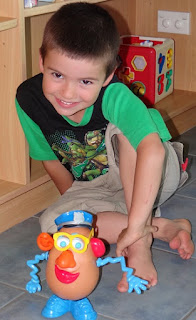 Wednesday 24th: Off to the doctors this afternoon with Hezekiah. He made this potato head while we waited. 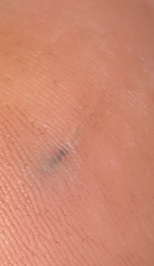 An odd reason for the visit today - a really deep splinter in his foot. It was so painful for Hezekiah. He had gotten it while playing at his friend yesterday, but only noticed when we got home and showed him the new school shoes I had bought for him. When he tried them on he said they were hurting. I checked out the shoe and then his foot, and spotted it. I think he had just been walking on his toes up till that point (being bare foot) and didn't really think about it. So I tried the baking soda paste overnight last night - but it's just too deep to budge.

He had a bath before we went, so it was nice and clean and soft. The doctor used a needle to scrape away layers of the skin above it. It was good for me to watch as I would have been very nervous about removing so much skin (and a needle is so much effective than a pin). It also helped Hezekiah that it wasn't just Mum hurting him - but it was the doctor - doing the only thing we could to get it out and stop the pain. He was so brave. Sometimes his foot would jerk and he would say "it's not me moving my foot - it's just my body". It was so cute but I fully understood what he meant. Those reflex jerks when nerves are touched. He did really well.
When enough skin was finally out the way, the doctor let me take over with the tweezers and I got it out (my eye sight just that little bit better). It was a great team effort. Once we were home I was able to get the other smaller one out from the other foot. ;-) 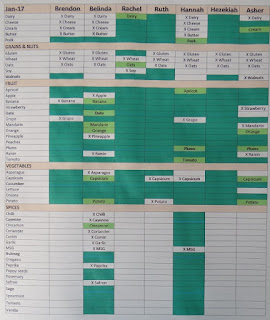 In the morning Hannah and I had headed off to Megan for a follow up EAV test. I knew the chlorine had been a problem for her again through December and the tests showed that I was right, there was chlorine in her system. So the drops will help clear that out as well as help her deal with all the extra chlorine she will be exposed too through the rest of the swimming season. (NOTE from 8 Feb - Hannah is doing so much better. Even within the first week on the drops I could see an improvement.)
I specifically asked to get herbs and spices checked. As I suspected, I can NOT have Coriander. I found that out the hard way in December when I made (and enjoyed) biltong (which I load up with Coriander). Cinnamon is border ling (but I'm still to scared to even try it from the terrible reactions I had when testing it on the FAILSAFE diet). 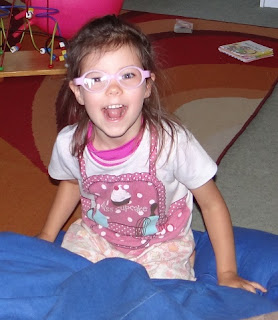 It was good to see that there are a number that I should be ok with though (I have avoided all herbs and spices since around August 2015). It seems to be more the red spices that I need to stay away from (chilli, cayenne, paprika and safron) as well as a couple of others. I was so excited about putting some nutmeg in my almond biscuits (not cinnamon - but good enough).
Right: Asher having fun this evening with the big soft beanbag. She was jumping into it and having a great time.

Thursday 26th: I got to trying out some ketocal recipes this afternoon. Ketocal is a powder that is specifically 4:1 ratio - and I have a whole book with recipes. So I did some blueberry muffins (with the vanilla one) and some cheese and bacon muffins with the unflavoured one. The dietitian had hoped that we could just try something out so that she knew if she should order both unflavoured and vanilla for us. It was tricky not having a proper scale - but worked well enough for a taster. 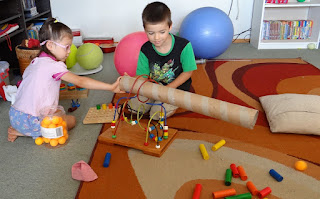 Friday 28th: Great to get something arrive in a nice long tube yesterday - it made a great game for them this morning. Asher does love "posting" things. 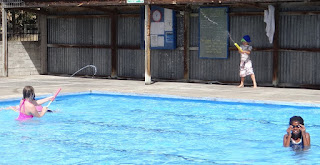 At 11 I headed up to the pool with Ruth, Hannah and Hezekiah for a pool party of Hannah's friend. It was rather cold, so they didn't spend too much time in the pool. Hezekiah hardly got in but mostly ran around enjoying the water "guns" that were there. I can't believe I didn't get any photos of Hannah or the birthday girl. I did race back home at one stage (when they were all out trying to warm up) to grab some extra towels and jerseys. 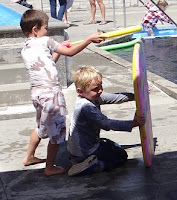 They had so much fun. A friend of Hezekiah's happened to walk past with his mother, and they came in for a bit. Hezekiah had so much fun with him.
I'm so thankful for Rachel watching Asher so that I could bring the other to the pool. 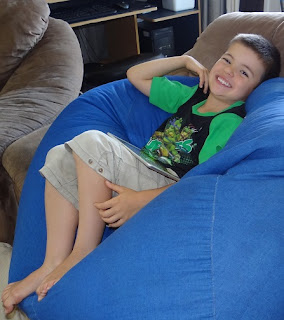 Once home and dry Hezekiah got some "school work done" so that he could earn permission to watch a movie this afternoon. His spot today - on a beanbag on the couch. 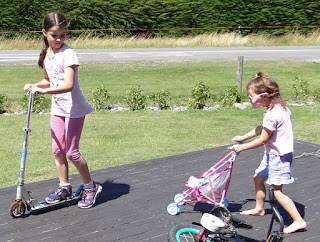 Hannah had her bath with Epsom salts and baking soda when she got home (to not only wash off the chlorine but also try neutralise some of the negative effect it has on her). She was then a great big sister and played with Asher on the deck for a while. 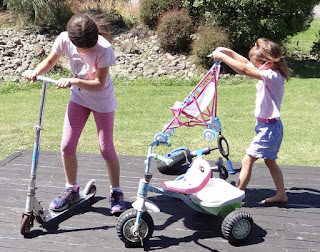 They had a little bit of an obstacle course around the deck today. Asher had so much fun "chasing" Hannah.

And then just 10 minutes after these photos were taking, Asher had a 1 minute Tonic Clonic. The strange thing was that she was so very tired, she slept for 2 hours. She is finally off the drug that she started in December, so I wonder if this is somehow related to her body adjusting to it getting out of her system.
Brendon then got a migraine and although he took a migraine tablet and went to bed, it didn't clear quickly. So I headed off to Bible study with the children.

We had hoped that Brendon would feel better after an hour or so, but he didn't and even had to take a 2nd tablet. So I brought the younger two home after dinner, got them into bed and then went back to fetch the older girls.
Hezekiah had a fall while we were out - and that was the only photo I got from the evening unfortunately.
Brendon had an excessively stressful week last week, so we are wondering if that was perhaps the trigger this time. He has been diligently not eating any chocolate over the last 6 weeks, so it was really disappointing to get such a bad one again. Stress is very likely the trigger this time though, as his body finally relaxed as he got home on Friday afternoon -and made it very clear - enough is enough. Now you rest.
Even though this blog ends Friday night, I may has well finish the story of Brendon's headaches. He felt better on Saturday morning, but another migraine hit in the afternoon. So he spent a number of hours sleeping it off. And then on Sunday afternoon the headache returned again. Thankfully he avoided the stronger migraine tablets this time, but it really knocked him. Poor guy. I really do pray we can find out what we can do to help him not suffer from these so regularly.
Since I started keeping records in August 2014, he has had one almost every month (every 4 to 6 weeks) since then, except for 5 months  (Nov 2015 to April 2016) while on a strict FAILSAFE diet. So although the diet did seem to be the only thing that has helped, I can't seem to pin point a specific food that we have re-introduced as being the trigger. And the FAILSAFE diet is so hard, we can't go back there. So I continue to pray and ask the Lord to help me know how to help this man, who is so precious to me. I hate to see him in pain.
Posted by Buckland at 10:00 PM