Birthday celebrations for the big 40 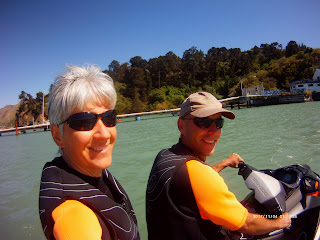 As a change of birthday celebration plans, we had booked to go on a jet-ski on the Lyttleton harbour for Monday 12th. Unfortunately the weather was not good (a strong southerly - so not much was happening on the harbour that day), so we had to postpone till today. Last week the children would have been at school and preschool, so to lighten the load for Rachel today, we organised for the 3 middle children to visit friends. Ruth headed over to her friend yesterday afternoon for a sleepover, and another friend was willing to collect Hannah and Hezekiah to spend the day with them. 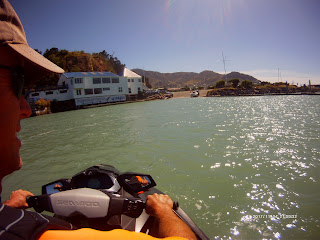 We left home at 8am so that we knew we would be there by 10 as requested. We were early (which we always prefer) and were really pleased about the beautiful clear day. There was a bit of wind which he said would make it a little choppy, but I think that added to the fun of the ride.
Brendon and I were on one jet-ski with the tour guide on another. He had given all the instructions before we launched and then we just waited in this area while he launched his. 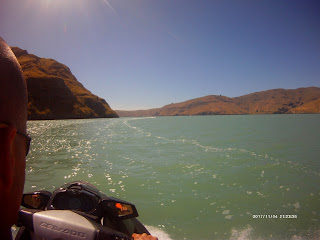 We were to stay 50 to 100m behind him and just follow him out. In this area it calmed down a bit, so I could brave letting go with one hand and taking this photo (more than 100m ahead of us at this stage). Up to this point it had been quite a rough ride. That made it loads of fun though. We went over some really big swells and often felt airborne. There were a number of times we had huge splashes soaking us. It was a bit like being on a water based roller coaster.
Below: We stopped in a bit of a sheltered area and I had a turn doing some driving. I was more than happy to get Brendon back in the drivers seat though. I found that as soon as we picked up speed and then hit a little bump, I would just let go of the accelerator and we would almost come to an immediate stop. So it was a bit of a stop and go ride with me driving.

I asked if he could take a photo of us, and so he came up close to get the camera. I am pleased I asked. What a stunning day to enjoy.

Nice to have lovely photos from the experience. I'm so thankful to a friend for lending me her waterproof camera.

Then we headed out into the ocean. That was a change with really big swells. Once we were over the main ones it did settle though, so we could idle out here for a bit while he chatted to us about the heads. The big earthquakes in Christchurch in 2010 and 2011 caused this area to now be around 30m smaller. 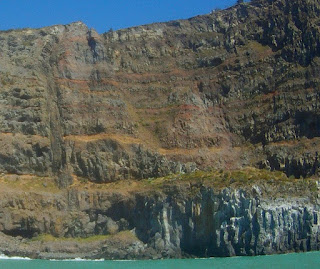 That area on the bottom right is the colour it all used to be - the grey. The front literally just fell off.
It did expose the amazing layers of rock formed by the various volcanic eruptions. And to the left of this photo you can see a lava vent (the vertical strip of rock). 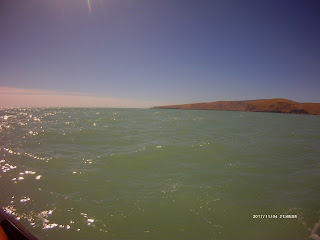 We also hung around out here for a while in the hopes of seeing some dolphins. We did spot one which we saw a few times. At one point he swam right under us. I was just not quick enough with the camera to get of photo. 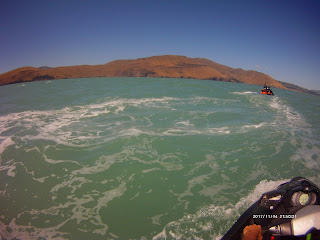 And then we started the trip back.

A little video to give a bit of what it was like. The really fun parts I was not able to video as I was hanging on with both hands. :-) 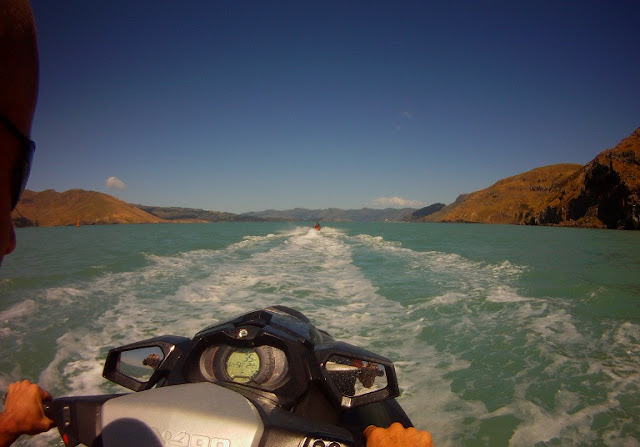 So beautiful and such a wonderfully special experience. 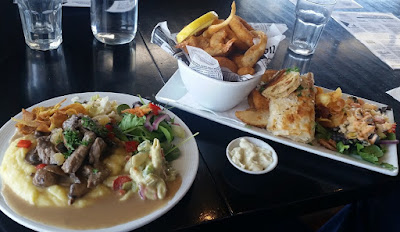 Then we stopped for lunch - another special treat for us. We even had a "one main meal off" voucher to use. A delicious sea food platter and then beef stroganoff (a favourite for both Brendon and I and which we have not had in ages). We just shared both meals and really enjoyed it. It was great to just be able to relax and take our time to just sit and chat and enjoy a coffee after our meal. 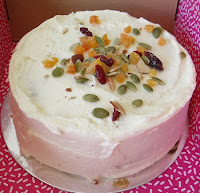 We stopped at a mall on the way home and used another 25% off voucher I had to buy a small cake. Such a great idea to have little cakes for sale. It was just enough for the 10 of us to enjoy for afternoon tea. Ruth's friend's mum offered to bring Ruth back in the afternoon, so I invited them to join us for afternoon tea. 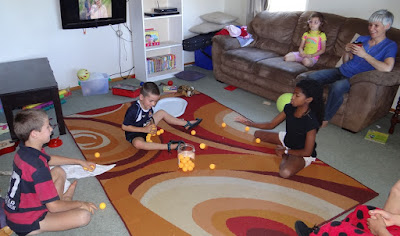 There was a fun game with the table tennis balls happening. By the time the camera came out we had lost 2 players - but still nice to have the record of the fun that was happening. And just from a simple box of little balls.

And then on the way out they had some hand stand competitions. Ruth's friend is very good, so it motivates Ruth to keep working on it. Her brother is in Hannah's class - so it was nice for them to get to know each other a bit more outside of school (and away from all the other kids). I loved how Hezekiah tried to join in too. 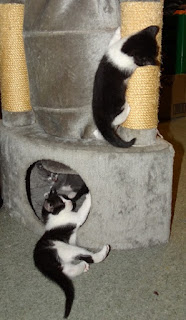 I enjoyed watching the kittens playing on the cat tree this evening. I am amazed at how quickly they have learnt to enjoy it. I had thought it would be a bit hard with the scratch poles starting that bit higher, but it's not stopping them. Princess is especially good at climbing. 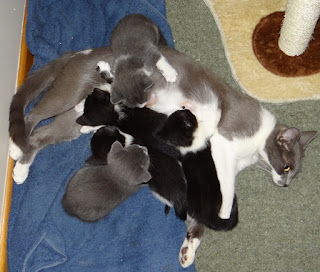 Getting so big now that some have to drink from the other side. :-)
Posted by Buckland at 10:00 PM