Sunglasses and a suit 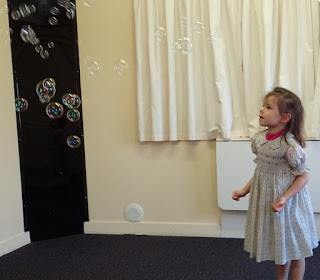 Wed 9th: Asher does love bubbles. She knows that her speech therapist has them and often blows bubbles for her at the end of their session. Lately I have had to be quite strict with her though and I only allow her to have bubbles if she doesn't grumble about the other things she has to do (looking at a book and playing with specific pictures that Jill has chosen). 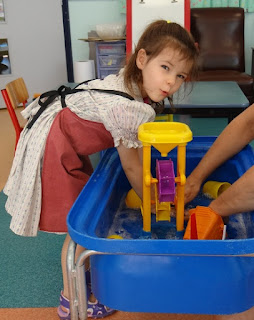 Unfortunatley this water play didn't last all that long as Asher started trying to drink the water. So it quickly got taken outside (it had bubbles in it - as well as having been played with by other children before).
Thankfully she enjoyed popping the bubble wrap, and had fun walking over that a few times. And then crawling over it too. It was a bit of a job to get her to go the other direction, but with a bit of encouragement we managed. 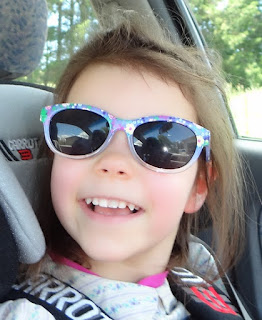 On the way home we stopped at the pharmacy and got her a pair of small sunglasses. I had asked one of the mothers at Champion Centre about glasses (as her daughter wears glasses) and she mentioned that the pharmacy have child sized ones. She also gave me the details of the optometrist that they use, and I phoned in the afternoon. To my delight, they had an opening on Thursday morning (from a last minute cancellation). We had already seen the GP and gotten a referral to the Hospital, but after chatting on Wednesday, we decided to go privately with at least this first appointment.
At 5:45 Asher had a 1 minute Tonic Clonic.
Thurs 10th:  Tomorrow is a holiday, and so Hezekiah's class was going to the library today (rather than tomorrow) and he had forgotten his books. When we got to school he went in but quickly came out again crying and saying his stomach was sore. A parent had stopped to chat to me, so I was still there. I didn't feel comfortable leaving him at school (not knowing if he was sick or not) as I was going to be in town the whole morning. So he came with. I only realised in the evening that it was the stress of not having his library book that was the major issue.
First Asher had a photo taken, and it was nice and clear. The lady immediately told me that Asher looks near sighted (that she doesn't see well at a distance).
Asher then saw the optomotrist. She had gotten rather irritated at just being at the rooms, and especially didn't like getting the drops in her eyes. So it was a rather stressful time for both of us (ie - no photos taken). While the drops started to work (dilate her pupils) we went for a walk. We tried the library down the road, but Asher just wanted to be outside. So we walked a bit and then headed back when we were do to see the optomotrist again. He was really good and really fast (especially as Asher was really stressed). He looked in each eye, chose a lens, held that in front of each eye and had a look again, and he was done. She can only really comfortably see things within 2 meters of her. Although her eyes are not very bad, he explained that by getting glasses now, the eyes will stabilise and that will help them improve. If we just left it, they would deteriorate. So her glasses have been ordered and should arrive in around a week's time. We paid a bit extra to get transition lenses, so that we don't need to worry about sunglasses. She also really does need her prescription when she is outside. 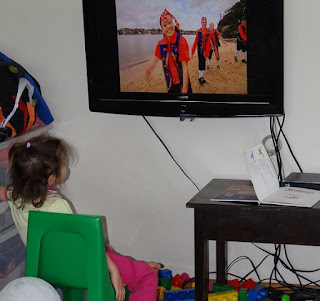 We are really thankful again for our Community Services card and the huge help that was (paying for the private consultation and for at least half the cost of the glasses).
Asher had a 1/2 minute Vacant seizure this evening at 7:45pm. We were a little late in getting her to bed when it happened.
Friday 11th: Now that I know Asher can only really see clearly up to 2 meters away, I brought a chair for her to sit on and put it nice and close to the TV. It has helped in keeping her a bit away from the TV. She would so often just sit on that bench and touch the TV. She has fallen off there a few times with seizures too, so at least this has helped a bit. I still plan to change the set up though. 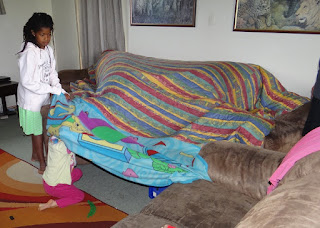 With it being a holiday (Show Weekend) the kids had fun creating a fort.
At 3:30pm Asher had a 1 1/2 minute Tonic Clonic.
Saturday 12th: Asher started with a runny nose yesterday and around midnight came into our bed. I noticed that she had a fever, so I was glad to have her close. During the early hours of the morning I was pleased to feel that the fever had come down. She was obviously fighting something though, so I was not too surprised when at 4:45am she had a 1 minute Tonic Clonic. The Lord answered all the prayers made for Asher today and she didn't have any more seizures and her temperature has stayed normal. We are so grateful. 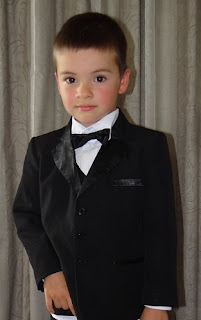 Sunday 13th: Hezekiah was very pleased when I said he could wear his suit to church today. Rachel had bought it for him (really cheap 2nd hand) and he just loves it.
He wasn't in a smiling mood when I took a photo before we left but was full of smiles this afternoon and was happy to put his jacket back on for a photo (although I see I didn't fix his bow tie).
Such a handsome little man. 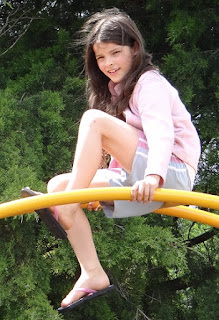 This afternoon Hannah headed off with Dad for a play. 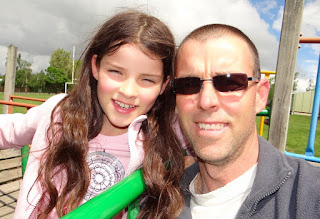